No doubt at some point you were zipping eastbound onto I-277 toward Uptown, glanced up and saw two figures casually hanging out on the ever-present Coca-Cola billboard. Well, behind every great billboard, there’s a story about the creative process and the people who made it happen. This is one of those stories.

While The Biscuit’s co-publisher, Matt Olin, was in Montana last week on a family vacation, he caught up with designer, illustrator, and former creative director of Adams Outdoor (not to mention, new mom) Samantha “Sam” White to get the skinny on how this engaging piece of advertising came to be. (Spoiler Alert: the woman mannequin was actually modeled after her!) 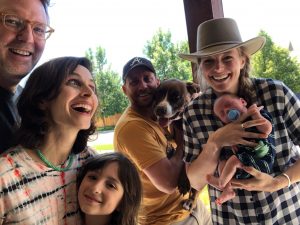 The Olins caught up with Sam White, husband Jason Yarborough, and new edition Jack, at their home in Bozeman, MT.

How did you end up being the model of the woman on the Charlotte Coca-Cola billboard?

I like to think it was because of my devastatingly good looks. Kidding. Honestly, we took the concept to Coke as part of the “Share a Coke” campaign. This campaign ran about four years ago with individual’s names printed on the Coke bottles themselves. To sell the idea to Coke, I was used just as a mock-up to help them visualize. Coca-Cola wanted to stick with the figure we sold them on, and that just happened to be me! It was simply being the right person, at the right time.

Tell us about the design process.

The Coca-Cola sign with Bachelor Curtis, prior to the addition of Sam. Image courtesy of Adams Outdoor.

Typically, Coca-Cola provides the completed creative to billboard companies to ensure consistency across their national campaigns. This case was no different. However, years prior, Adams had created the first billboard mannequin. When Coke bought the billboard, Adams decided to do a big reveal to the city of Charlotte. Over a period of time, the mannequin painted the billboard red and then added the iconic Coca-Cola script. He finished his work by sitting on top of the billboard enjoying an ice-cold Coke.

When the “Share a Coke” campaign began running, Adams account executive, Garrett Lucas, realized the lonely billboard guy needed someone to share a Coke with. We thought it best to have some equality in the sky and sharing a Coke with a female just made sense. We did some photoshop mock-ups of what it could look like and put together a pitch. The idea was pitched to Coke and… sold.

Tell us about the modeling process.

I remember going outside of the office one afternoon and sitting on a picnic table trying out a few poses we thought would look natural sitting on the edge of a 48′ long billboard. We took a few photos and tried them out with Photoshop. Once decided on, we sent off the photographs, including several angles of the pose to a partner in Atlanta that Adams Outdoor uses for overly large, molded 3D billboard props. Surprisingly, the figure would be about 10ft tall, if she was standing. I think her overall length from foot (in the seated position) to the head is about 7ft.

Who else was involved in creating it?

For an execution of this scale, it’s “all hands on deck” from start to finish. While my creative team and the account executive that handled the Coke account at the time managed the concept and communication chain, Adams has an operations team that rarely gets the spotlight. We can come up with great ideas all day long, but that team figures out how to make our ideas actually come to life and deserves all the credit. Joe Cala is the operations manager at Adams. He and his crew engineer our ideas and turn even the craziest dreams into reality, and makes sure they can withstand time and the elements. After all, Sam needs to be there for 46 years (if you’re keeping tabs, JFG, the previous billboard, was there for 45).

What about the guy? Who was the model for him?

That’s Curtis, and as mentioned above, he had his own extravagant reveal to the city several years prior! Curtis is named and modeled after another former Adams Outdoor Creative Director, Curtis Petraglia, who is in Los Angeles now.

How does it feel to know you are looking over the Queen City every day, even though you now live in Montana? 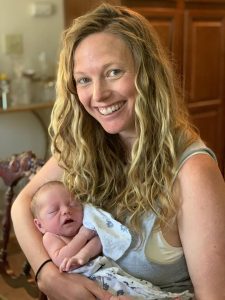 Sam White and her son, Jack.

Honestly, great. We miss the Queen City dearly so to know that a 10ft version of myself is looking over the city daily gives some comfort! It was such a fun process to be a part of and the fact that the mannequins are used over and over for different campaigns is pretty fun!

What other interesting things do you want to tell us about this billboard and experience?

First of all, billboards are awesome and I am so grateful for the experience to have worked so closely with the fantastic team at Adams. This billboard, in particular, has a pretty cool story. Before it was a Coca-Cola billboard, it stood as the iconic billboard for JFG coffee from 1964 to late October of 2009. That JFG billboard is believed to be the longest-running billboard campaign for Charlotte. It was part of the Charlotte skyline for decades. After that, the JFG structure was moved to the Music Factory and was at VBGB for a long time. It’s an honor being part of a new tradition. It will be fun to see how long Sam and Curtis share Charlotte’s skyline.