Jay Ward Explores ‘A Labyrinth of Secrets to Unlock’

If you think you don’t like poetry, Jay Ward – project manager by day and poet 24/7 – would like to have a word with you. Probably more than one word … and some of them will rhyme.

“Depending on your first experience with poetry, it can feel intimidating,” he said. “It may feel like a labyrinth of secrets to unlock. It can feel hostile because you may have to do so much digging to figure out what the poet is saying. If it was something you were made to study in high school and you didn’t like that tone or that style, you can convince yourself: ‘Poetry is not for me.’”

“But there are so many styles and avenues and access points,” he continued. If you don’t like the style you recall from high school, try something else.

The Opening Verses of Jay Ward

Ward started writing poetry as an elementary school student in Rich Square, North Carolina at the same time he was developing an appreciation for hip hop. 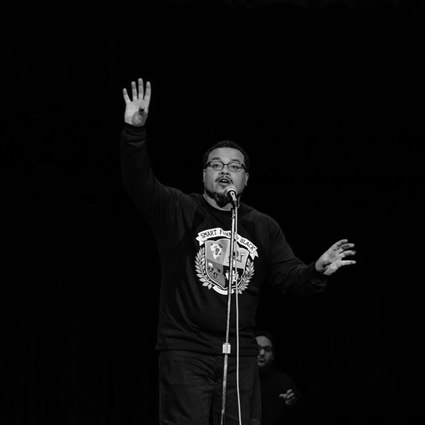 “There was a contest at school to save the Statue of Liberty,” he said. “You had to write a song and record it. I ended up writing a rap song. From that sprang decades of writing and trying to be creative.”

Although he grew up in eastern North Carolina, the Poughkeepsie, New York native’s voice bears no trace of a Southern accent. It’s a neutral, “broadcaster’s” voice – a smooth, powerful, pleasing voice honed through years at the mic.

Spoken word poetry makes a good entry point for anyone who finds poems too tricky to decipher.

“The thing about spoken word poetry is you don’t have the opportunity to look at it, reread it, figure out what’s meant and whether there’s a double meaning,” he said.

“It has to be straightforward enough that people can understand it immediately and have that kind of access to it. All my stage work is definitely that way, and I think a lot of that carries over into my page work as well, where I think most of my poems are pretty easily accessible.

The Slam Heard ‘Round the World

Like Kia Flow, the first poet we interviewed for this series, he’s a member of Slam Charlotte and a National Slam champion (2018). Gentrification, one of his spoken-word performances, has garnered 11,328 views since it was posted on YouTube in October 2019.

His topics vary widely –from race to relationships to his childhood in the South – but the thread running through all his poetry, he said, is fatherhood. His three kids are 22, 24 and 26.

“Even if I were to write about current politics, I think it’s always through the lens of fatherhood.”

Here’s an excerpt from his “Homecoming, Rich Square, NC.”

Northern black folk
drive through my hometown &
stop along the road
to pick cotton – a drifted piece,
something the machine skipped

over. Feel the need to connect,
honor ancestors by picking straight
from the claw of the plant’s mouth,
seed and all,

how thorny it feels, how it calls
out blood like the Big Dipper sang
a whole bloodline toward a lesser wound …

Ward doesn’t wait for the muse to appear. “If inspiration comes to me, that’s great,” he said. “But I try to pursue it through practice.” 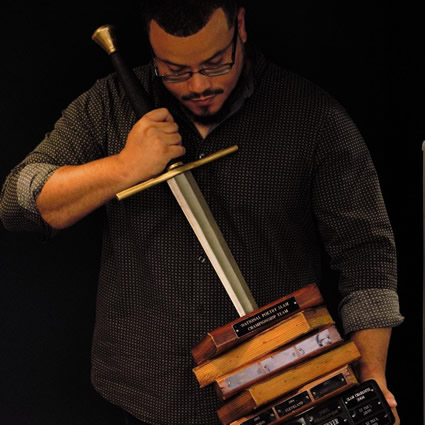 He’s disciplined about the writing process. “I push myself to write,” he said. “I’m doing something every day. I’m either reading, editing or revising older work.”

The most challenging thing about being a poet for Ward is “turning it off.”

“I think that’s true for any artist or anyone with a creative mind,” he said. “My mind is all over the place most of the time. To write, I try to cut off other thoughts, and just stay in the moment.”

Writing a good poem (or a good anything) involves writing a second, third, and possibly, a 12th draft. The right words make the difference. Editing is part of the process.

“For me, it’s constant revision,” he said. “I’m always revising. I even revise my poems that have already been published.”

Reading poetry can be therapeutic. Ward calls it “a way of dealing with emotions and memories … you don’t have words for.” Good poets, he said, have a way of writing about their personal experience and making it universal.

Reading a poem that resonates can lead to a catharsis for the reader.

Isn’t that a good reason to give poetry a try?