A Walk Through History: 104 Years of Cheer!

Necessity, as the saying goes, is the mother of invention, and a World War I sugar shortage led to the invention of a “uniquely Southern” favorite — Cheerwine! 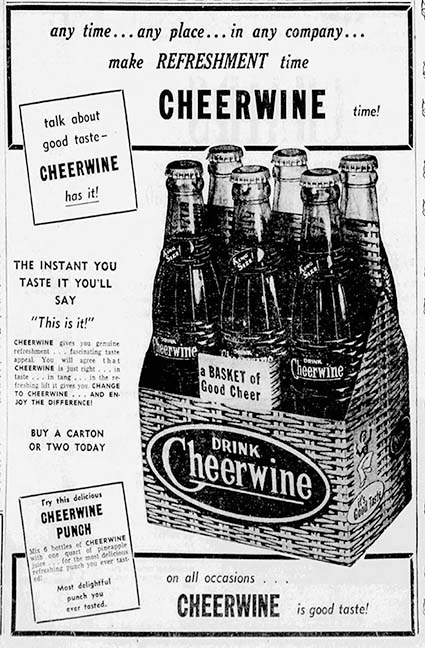 Due to the scarcity, Salisbury bottler L.D. Peeler (whose family still runs the company he founded five generations ago) experimented with different flavor combinations that didn’t rely heavily on sugar. His tinkering paid off when he created a “deliciously different” beverage by mixing his existing cola with cherry syrup.

Peeler owned the Mint Cola Company, which quickly changed its name to Carolina Beverage Corporation in part to help market its new product. A 1917 story in the Salisbury Evening Post described the company’s directors as experienced, progressive and “wide awake.” (I’ll bet they were.)

In the 1920s, Cheerwine began a not-so-subtle newspaper advertising campaign: “Everyone recognizes the beneficial effect of Cherry tonic. In Cheerwine you not only get this beneficial property but that invigorating, healthful, restful, satisfying taste, which makes you feel better after each drink. There are no bad effects—contains nothing to create habit.”

These ads essentially marketed Cheerwine as a healthy beverage and effectively gave Coca-Cola, which then contained trace amounts of cocaine, the side-eye.

Cheerwine built its following mainly by word of mouth with some print advertising and the occasional TV spot. But in 1981, in an effort to take on giants like Coke and Pepsi, the company ran a 16-week radio ad blitz on 85 stations across the Carolinas.

Cast as an underdog, the ads must have worked because Cheerwine soon expanded its territory from North and South Carolina only to Tennessee, Georgia and Virginia. (Online ordering has now made it available to the entire United States.)

Cheerwine also found its way into new products by joining forces with other North Carolina brands. In 2002, Food Lion introduced Cheerwine Ice Cream. And twice, Cheerwine has partnered with Krispy Kreme. Doughnuts filled with Cheerwine-flavored cream rolled off the famous conveyor belts in 2010, and 2016 and 2017 gave us Cheerwine Kreme soda.

Today Cheerwine’s consumable product line includes the original drink, Cheerwine Zero, a seasonal holiday punch and a barbecue sauce. You can also buy all manner of Cheerwine merchandise including glassware, T-shirts, blankets, grilling tools and lip balm. And should you want to take your Cheerwine fandom to the next level, then I’ll see you at the annual Cheerwine Festival in Salisbury set for Saturday, May 21, 2022. Let’s hear it for the Cheer!

Full disclosure: The author is a lifelong Cheerwine fan who, in a burst of enthusiasm and stupidity, once attempted to make a Cheerwine Bundt Cake for her (now ex-) husband. This led to important lessons, e.g., even delicious Cheerwine can’t save a cake when the baker has no idea what she’s doing. (For the record, it did not lead directly to divorce.) Also, never one to shirk hands-on research in the field, the author enjoyed a Cheerwine float from Cook Out during the writing of this piece.