An Exhibition of Creative Prowess … and Creative Friendship

“Something fundamental for me is the great joy that comes from having true friends who encourage and promote the artistic work that one does, knowing how complicated this profession can be sometimes.” – Leandro Manzo

More than 100 paintings and prints created by Charlotte artist Leandro Manzo are on display right now at Merino Mill, a former textile factory, in Mooresville.

The exhibition, “Leandro Manzo: Origen,” spans his work over the last decade and features a mixture of old, new and never-before-seen pieces. Some works on display are for sale; others are on loan from private collections. The exhibition is open to the public through April 9, 2021.

But, there’s something else on display that many visitors won’t see — the creative friendship and support of Manzo’s patron, Michal Bay. 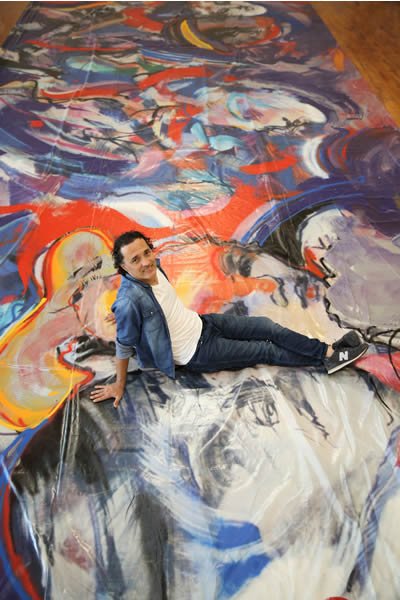 “I am immensely grateful to Michal, who has offered me all his support,” said Manzo. “He is a person with infinite enthusiasm and powerful vitality, who loves and enjoys the arts. I see his friendship as a great privilege.”

Bay, the developer of Merino Mill, has known Manzo for five years. He has purchased several original works from Manzo and donated space for his current exhibition.

And, the admiration is mutual.

“I love [Leandro’s] work,” says Bay. “I love his use of color and how he explores different periods and aspects of life. His artwork always tells a story.”

Journey to the Queen City

Born in Rio Gallegos, Argentina, Manzo grew up surrounded by the arts. His father, who now lives in Buenos Aires, was a literature professor with a lifelong passion for illustration, specifically pencil drawings. That spoke to Manzo.

“[He] taught me something rarely seen these days, which is the importance and love for drawing,” said Manzo.

It wasn’t long before Manzo’s own skills were recognized and celebrated. When he was just 13, he was invited to submit work for a collective exhibition of professional, adult artists. Not long after, he began traveling the world with his work.

A group exhibition brought him to Charlotte in 2003. He intended to stay for a month. He stayed for a year, feeling drawn, he said, to “the trees, the colors and the mood of the city.” While he moved away a few times, the Queen City kept calling him back. He moved here permanently in 2015. 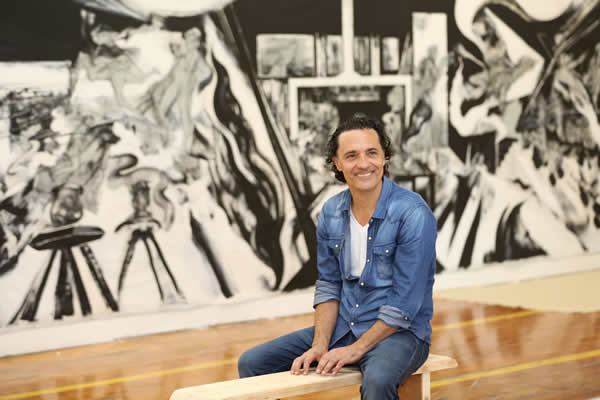 While he felt here from the start, what has solidified Manzo’s relationship with Charlotte has been support from his patrons.

The Importance of Patrons

Davita Galloway, the founder of dupp&swat, a flexible space for creative performance, retail and community events at Camp North End, has an expression she uses regularly: “For art to survive, artists must survive.” It’s her way of saying that creatives deserve to be paid — and paid well — for their work.

The vital relationship between artist and patron has existed for centuries. If creatives can’t find the support they need, they stop working or move to a community that will support them.

Manzo has been fortunate in this regard. And, he knows it.

Not long after arriving in Charlotte the first time, Manzo was introduced to a family that invited him into the home to paint a domed ceiling. That job enabled Manzo to pay his rent for a year. It also established a relationship that exists today.

“My heart feels them to be, in a way, part of my family,” said Manzo. “[T]hey have acquired more than 50 works. They are a family that generation after generation has had a great sensitivity and love for the arts.”

Manzo has found a similar kinship and bond with Bay.

“Michal’s patronage and his great support for me is essential,” he said. “It allows me to produce large-format works in a beautiful studio, with spectacular natural light, without pressure. I’m also able to exhibit the works in a huge space and be in the wonderful atmosphere of Merino Mill.”

The relationship between Manzo and Bay is reciprocal. Bay, who also paints, says Manzo’s work reminds him of fond memories growing up in Turkey.

“His work reminds me of beautiful days,” says Bay.

Bay believes supporting the arts is an important aspect of being a business owner and of community building. “Life is not only based on business,” he said. “You have to help others make your community vibrant and pleasant. Art is so important. When you go to great cities, they have lots of art galleries. If you’re helping the arts, you’re helping your town.”

In the wake of the current show with Manzo, Bay is considering offering additional space to other artists at Merino Mill, as well as playing host to a future exhibition for Elvan Aplay, a Turkish artist who grew up in Sweden.

At Home in the Charlotte Area 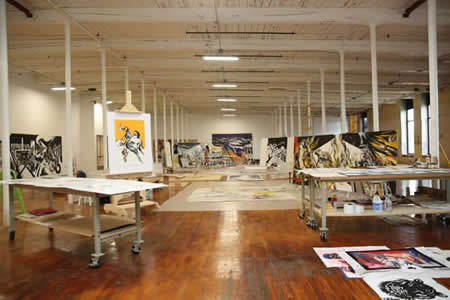 Manzo has moved a few times. But, with patrons like Bay, and Charlotte’s the burgeoning creative community, he thinks he’s found his home.

“You just have to see the amount of murals and expressions of public art, and even the occasional paint-stained teen or people in their 20s walking through some neighborhoods of our city while working on their artistic projects,” said Manzo. “I see Charlotte at this moment as a hotbed of artistic production that in the near future is going to be talked about.”

About the Exhibition & Leandro Manzo

“Leandro Manzo: Origen” will be on view until April 9, 2021 at Merino Mill — 500 S. Main Street in Mooresville. Gallery hours are Thursdays through Sundays from 3 p.m. to 8 p.m. or by appointment.

The exhibition features work from several previous collections by Manzo, including a series of new paintings called “Where does life come from, and where does it go …” Manzo has even created a new work on the floor of the gallery.

Visitors can also walk through “The Painter’s Kitchen,” an active work area where they can gain insight into Manzo’s artistic process. 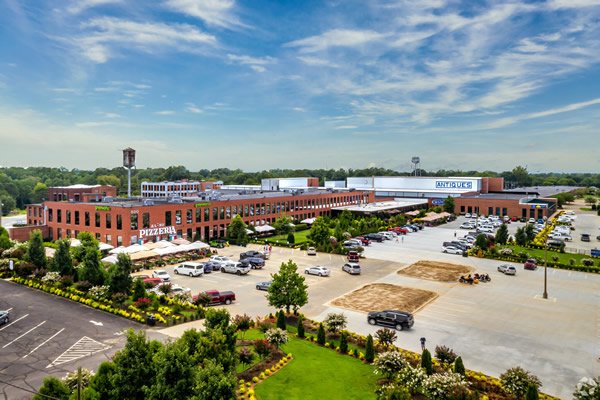 When you visit Merino Mill to see Leandro Manzo’s exhibition, you may want to take in Merino Mill. Here are a few facts: