Back to Business: Fishing for Information & Fixing Broken Bones

“As I was falling, I watched the top of the tree getting smaller. And, in that instant I knew I was in deep trouble. I said to myself, ‘I should be hitting the ground any time.’ Then I did.” – Chris Davis

Last year, Chris Davis took a fall. A nasty one.

He was doing yard work and decided to cut a troublesome limb out of a tree.

“First off, let me say this,” Davis, a technical trainer in aircraft maintenance, said. “I am not a tree trimmer. I could not have done it more wrong if I tried. I put a 24-foot extension ladder on a pecan tree. Took my chain saw up to 20 feet; I remember seeing four steps left. I cut the branch, and it swung behind the tree where I was and took out my ladder.”

Davis had the presence of mind to throw the chainsaw as he fell, but the damage was done. The branch hit his girlfriend, Lisa Mills, in the head. Davis shattered his arm, elbow and wrist. He also broke his back.

Once he knew his girlfriend was stabilized, Davis’ thoughts turned to himself.

The look on the EMT’s face told him he was in bad shape. And, he knew he’d taken a bad fall, but he’d taken another fall … one that was taking him far away from the creative passion that gave him so much joy —  hand-crafting customized fishing rods for family and friends by hand.

[Mills is okay. While she had to have vascular surgery, she’s back at work and has a tiny scar now.]

A 30-Year Love Affair with Fishing

Davis, who has lived in the Charlotte area since 2004, became entranced by the art of making fishing rods in his early 20s.

“I learned from an old man who could attach fishing guides on a rod using a spool of thread, tape and his rocking chair,” he said, “I was amazed.” 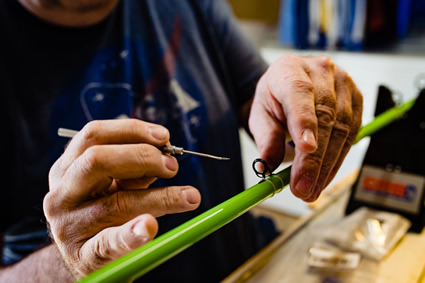 Davis laughs when he talks about the first rod he made. He remembers putting the reel seat the (place where you lock the fishing reel to the rod) in backwards. It couldn’t be used like a traditional rod. But, even with that mistake, it was the start of something beautiful in Davis’ life.

“I kept [the rod] and I will be danged if I didn’t slaughter fish with it,” he says.

That “backwards” rod was the beginning of two traditions in Davis’ life — making rods and giving them away.

“It was a great rod, and I left it in Seattle with a couple of trout fishermen,” said Davis. Fishermen need a good laugh every now and then.”

Since then, Davis has found joy in fixing broken rods and making new ones for people at his church or those who deserve to celebrate an accomplishment. Doing that carries great meaning for him.

After the fall, Davis needed to get back to making rods as soon as possible.

Can You Fix It? 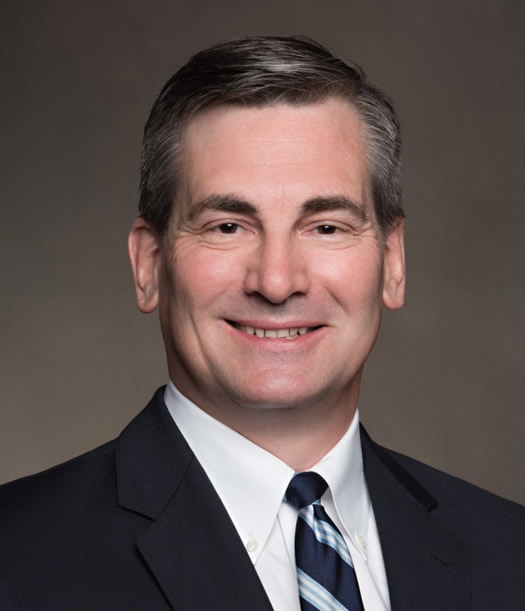 The path to recovery led Davis to OrthoCarolina and Dr. Benjamin Sutker, a native Charlottean and hand surgeon who moved back to the Charlotte area in 2018 after practicing in San Antonio, Texas and Savannah, Georgia.

“Dr. Sutker saw me [the night of my accident],” said Davis. “I remember him with his UNC cap on, saying, ‘You really did a number on your wrist.’ I kind of cut him short and asked if he could fix it. He said ‘yes,’ and I never once had a doubt he could.”

Sutker put Davis’ elbow back in place and put a spanning plate in his wrist to stabilize its complex fracture. The plate was removed in a second surgery. Now, Davis is back to what he loves to do.

It takes about three months to heal from a surgery like Davis’ and possibly up to a year to achieve full range of motion. But, almost from the beginning, the wheels were turning in Davis’ head.

Davis learned from Sutker that he had started fishing as a boy on his grandparents’ farm and that he’d fallen deeper in love with fishing while practicing medicine in Savannah. He noted his love of the University of Chapel Hill, where the doctor attended college, medical school and completed his residency. 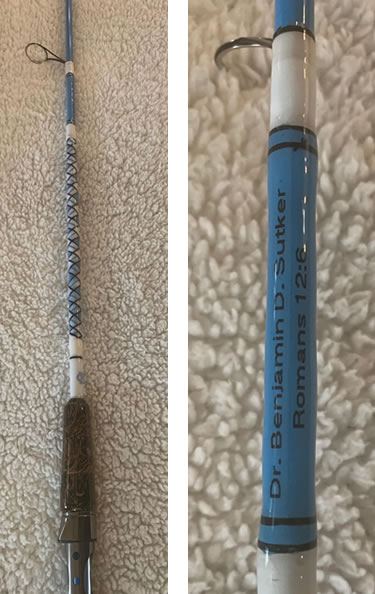 Sutker didn’t realize it, but Davis was filing all those little details away. A few months later, Davis presented Sutker with a unique gift — a customized rod.

Sutker was beyond grateful. “I was completely blown away and incredibly touched,” he said. “[Mr. Davis] had kind of hinted he might put something together for me, but honestly, it’s one of the nicest presents a patient has ever given me.”

“Dr. Sutker’s rod is UNC blue with the logo,” said Davis. “I wrapped the guides in white then for the fret work, I made diamonds using white ribbon, blue and black thread. Some of the knots I tried to make like surgical knots you could feel. I put his name on it with a Bible verse — Romans 12:6 to basically say, ‘If you have a gift to help others, use it.’”

And, that’s exactly what Sutker set out to do. “He added, “One of our goals is getting our patients back to doing what they like to do,” he said.

Going with the Flow

Sutker says he’s looking forward to breaking in his new rod … if Mr. Davis will be kind enough to share one of his “secret spots” for great fishing.

While he is still dealing with the effects of a broken back, Davis is happy to be back at work making rods he can give away to people in his life. He says he’s looked into forming a nonprofit, but it’s too much work and he’d rather spend the time making rods.

EDITOR’S NOTE: Mr. Davis is a great storyteller. He was also adamant about exactly how we should end this article. Here are his words (and punctuation): “Doctor Sutker and his staff are AWESOME people!!!! Print that!!!” 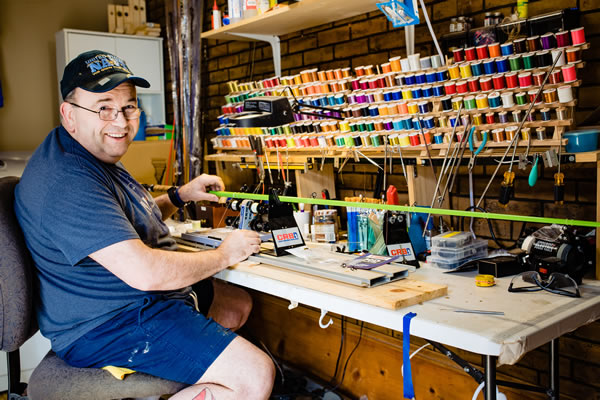