Charlotte Art League Is Moving … Across the Street

Jim Dukes is used to things blowing up.

Today, Dukes is the executive director of the Charlotte Art League (CAL), but his background is in explosives. As a former defense contractor for the United Nations, he specialized in disarming mines and bombs. In fact, it’s the five traumatic brain injuries he sustained doing that work that led him to the art world in the first place. But, we’re getting ahead of ourselves.

Explosions are nothing new for Dukes. That’s why he didn’t panic when Tony Kuhn of Flywheel Group, CAL’s landlord hit him with a bombshell in mid-2020: We need you to move.

“We just started getting creative”

Luckily, Kuhn had a backup plan in place — moving CAL to a newly refurbished building a block away from the League’s current location just off E. Sugar Creek Rd. on Raleigh St.

Dukes saw this as an opportunity to work with Kuhn to create something new. While original plans for the building leaned into co-working, Dukes pulled from his experience in construction to propose making the building a destination for creative businesses and nonprofits. He says Kuhn and his team were open and saw the potential of establishing a new arts hub along with retail, commercial and residential space.

“We speak the same language, and we know about putting pieces of the puzzle together. So, we just started getting creative,” said Dukes. Listen to a podcast conversation between Dukes and Kuhn about how the project came together here.

A new path for a longstanding organization 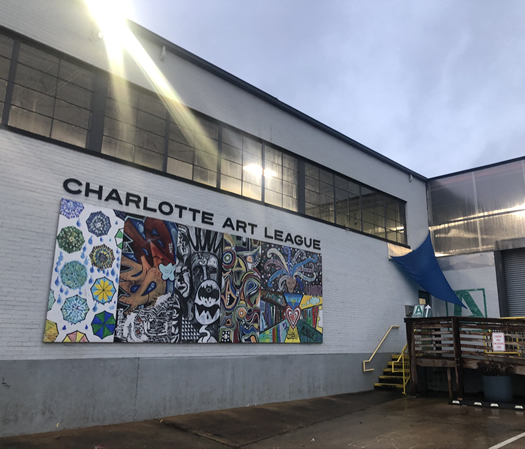 The Charlotte Art League knows a few things about moving on short notice.

The League was formed in 1965 as an informal group of local artists who met at each others’ homes and public places to paint together and exchange work and ideas. According to their website, CAL is “Charlotte’s oldest nonprofit art gallery and organization.”

As their reputation grew over decades, they moved into a space on Camden Rd. in South End. They enjoyed steady foot traffic — and the sales that came with it — and hosted events there until 2018 when development pushed them to find a new home.

After a search, they found their current location, roughly 10,000 square foot space at 4100-A Raleigh St., just north of the NoDa arts district. It was a big space that presented challenges for an organization run by volunteers and two part-time employees.

CAL had been recognized and valued as a South End staple. Artists and customers knew exactly where to find them. Strong sales and studio rentals meant the League hadn’t had to do much fundraising up to that point. They needed a new strategy to survive.

After five traumatic brain injuries related to his work as a defense contractor left him blind in one eye, Dukes had to retrain himself to walk, read and work. He discovered an interest in photography and followed that thread.

Photography led Dukes to using arts to heal veterans with PTSD and then to arts and cultural management. In 2019, he was living in Charlotte, but serving as the director of healing arts programs at The Big Red Barn Retreat Center in Blythewood, S.C. He wanted to get more involved in the Charlotte creative community, and Kate McAllister, CAL’s part-time director of operations invited him to get involved. It didn’t take him long to jump in with both feet.

He brought with him lessons he’d learned at Big Red Barn and Tapps Arts Center in Columbia, S.C. before that.

“I’d learned everything from running events to running exhibits, getting renters in — whatever it takes, mopping floors,” he said.

New tricks from the new kid in town 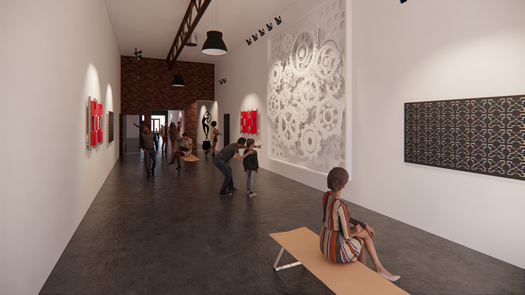 Dukes interviewed for Connelly’s position and started work as executive director on June 1, 2020 — a week after he tested positive for COVID-19 and five days before the League jumped in and painted plywood murals on the same block as the “Black Lives Matter” mural Uptown.

Prior to his new position, Dukes had already put his willingness to try new things to work at CAL.

Dukes wanted to court younger artists, too. With CAL minutes away from Garinger High, he was shocked that the organization had no relationship with the school.

“Why? Why aren’t they here? One of my first emails was to the art department [at Garinger]. ‘What can we do to get you here?’,” he said. Soon after, students participated in an exhibition.

Over the summer, CAL kept innovating, inviting the public to drive-thru art shows and drive-in poetry events. And, then … Flywheel called.

“I like Tony [Kuhn] because he doesn’t sugar coat things. We have frank conversations,” said Dukes.

The Flywheel team had different plans in mind for CAL’s current home. They offered Dukes space in a different location across Raleigh St. The initial plan was for the building to be mostly co-working space. Dukes felt inviting other creative businesses and nonprofits in was a better idea. Watch a 30-second flyover of new building courtesy of The 5 & 2 Project.

“We went back and forth,” said Dukes. “They would listen and Tony would go back to his partners to see what was possible. How are we going to do this? It has to be done. We’re going to make it done. Let’s just go.” 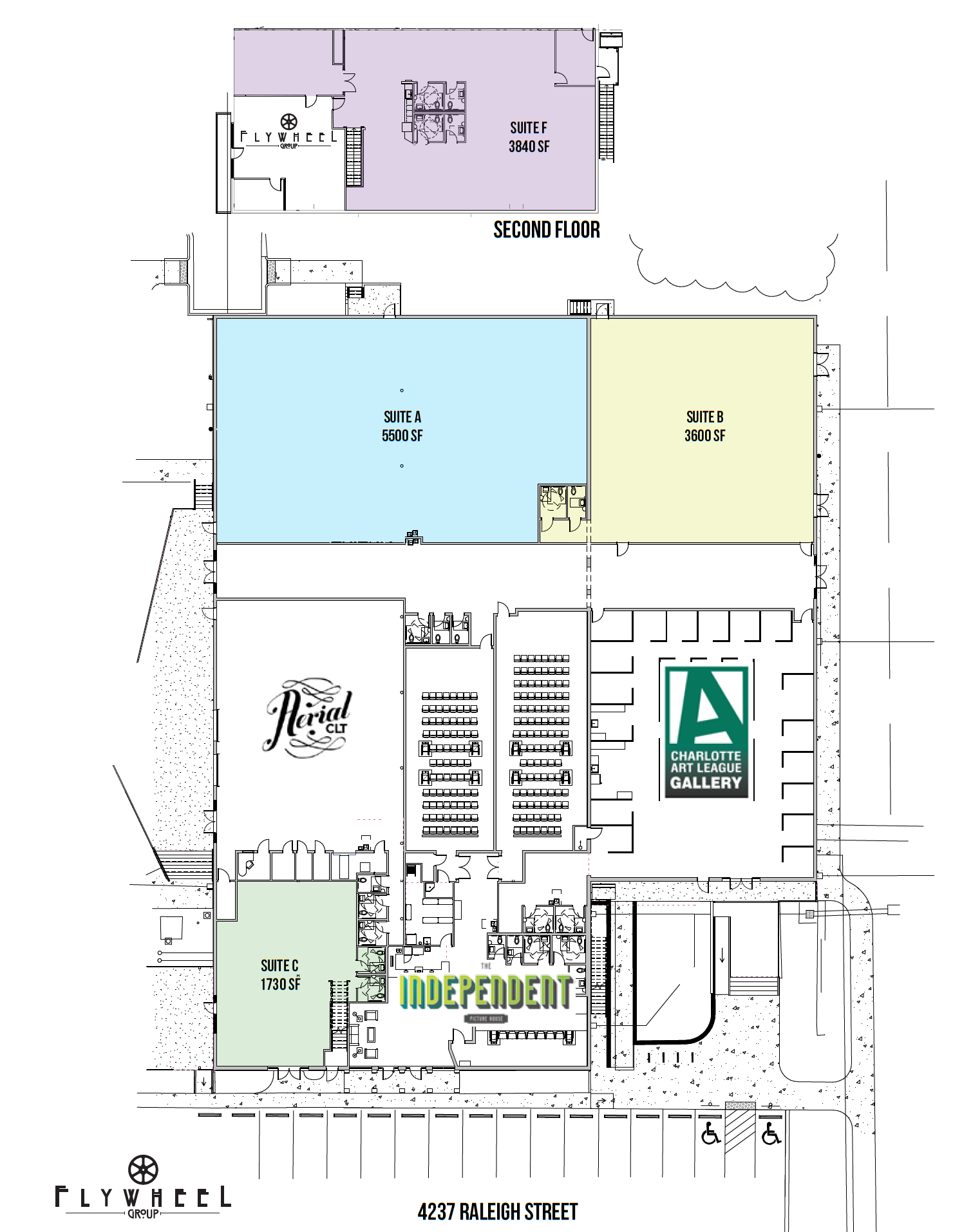 Floorplan for the 4327 Raleigh St. arts building designed by Odell

Soon, Dukes was bringing organizations to the party. On a Sunday trip to Oso Skate Park in Plaza Midwood, he learned they needed to move. A quick text from Dukes to Kuhn led to a meeting with Oso’s owners just a few days later.

Now, CAL and Oso are going to be neighbors, along with The Independent Picture House (formerly Charlotte Film Society), AerialCLT, a black box theater, a future bar and restaurant, rentable conference space upstairs, two outdoor performance spaces, an off-leash dog run and more. The architectural design for the building at 4327 Raleigh St. was created by Odell, with Michael Baujan serving as lead designer.

“Here, you can get breakfast, host a meeting upstairs, come down to the Art League for a lunchtime art event, go back up to do more work, go to OSO for a skate lesson, work some more and wrap up your day on the patio with live music and a cocktail,” he said.

[For more about the development as a whole, read The Charlotte Ledger’s story about the project.]

CAL hopes to move into its new home starting in June. And, they’ve initiated a capital campaign to raise $120,000 to upfit the space, which is about the size of their current location.

While raising that kind of capital is new for CAL, Dukes says sponsors have already started expressing interest. And, he’s confident that the new location — which gives his nonprofit the ability to attract outside events, rent space and generate more foot traffic from their neighbors — will supply CAL with the financial stability it needs.

Collaboration, Dukes says, is the key to it all working. That’s a lesson he learned working for the UN with bomb experts from around the world. “We all relied on each other to stay alive,” he said.

“What will kill the collaboration are turf wars and lack of humility,” he added. “If we can all commit to pulling the rope in the same direction for the success of art in Charlotte and let that be the success and not the individual success, it’ll work.” 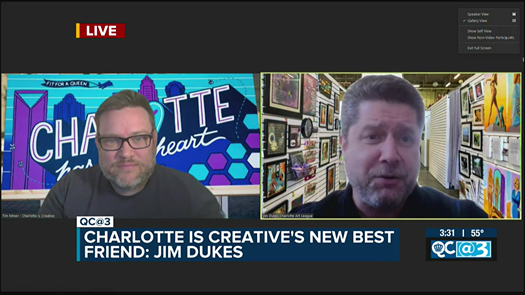