Long before the renaissance of the mural movement hit the Queen City, a hand-painted mural of a Coca-Cola bottle has graced the corner of 6th and Graham. It’s been in need of a touch-up. Coca-Cola Bottling Company Consolidated hired Amber Thompson, a graphic designer from Lake Norman area, to restore it to its glory. And, this isn’t her first time. Amber is the granddaughter of Andy Thompson, the last person to restore this historic hand-painted ad back in 2002.

Here are the results of her hard work. 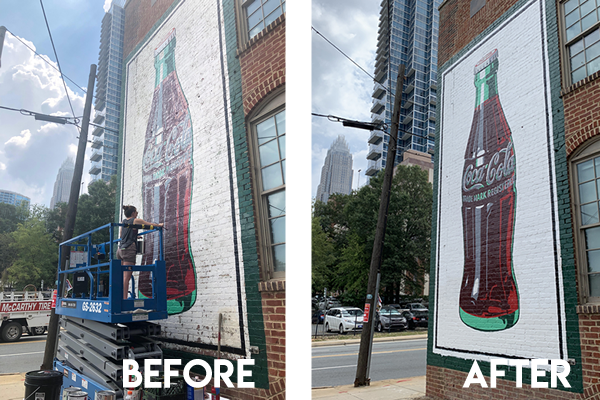 We caught up with Amber while she was working and asked her to tell us a little more about how she got set down the path laid by her grandfather, who passed away in 2017.

Q. Tell us a little more about your grandfather’s career. How long did he paint? How did he get connected with Coca-Cola?

My grandfather worked as a sign painter for Coca-Cola for over 30 years. After his time at Coca-Cola, he ran a freelance sign-painting business where he painted banners, fire-trucks, race cars and more. Working for Coke was his first job out of school. He had no sign-painting experience going into it, but quickly caught on.

Q. When did you start painting with him? What was that like? How many projects did you do together?

I started painting with him in the summer of 2016. He took me along to help paint murals in Cherryville and Concord, NC. He taught me everything from prep work, making patterns and, of course, painting.

I was thrilled to be painting with him. I knew that was his job my whole life, but it wasn’t until that summer that I really realized how cool it was to be doing what he was doing. I could tell that he really wanted me to learn all that I could and I remember him telling me he wished I was around when sign-painting was more popular because he thought I showed the skills to have had a real shot at it.

Q. Tell us about your own design work.

You can find some of my other murals in the Coca-Cola consolidated office in South Park,  at Anytime Fitness in South End and online at amberthompson.net. I currently work at Winget Art Studio in Lake Wylie as one of their designers.