For some time now, Charlotte has been known as a location for feature films and television shows. But, lately, the Queen City seems to be gaining steam as the home of up-and-coming filmmakers, with the recent releases of films like MIKE by Kent Smith, the documentary My Father’s Brothers by Shawn Kelly and others.

Add to that list of notable Queen City filmmakers, Chuck Kleven, a videographer with Charlotte Star Room, a media partner of Charlotte is Creative.

From “Lime Dog” to “Tucker & Cohen,” Chuck has added his directorial style and flair to most of the original videos featured in The Biscuit. But, over the last few years, Chuck has been exploring new filmmaking frontiers with his friends, Elliott Brady and TJ Proctor.

Shot over nine days in Wilmington, the 16-minute short tells the story of “Little,” a brave young girl with an active imagination who’s inspired by a comic book called, “Frontier,” (drawn for the movie by artist Debi Hammack) to escape her real-world challenges and build a new life for herself in the forest. As her journey progresses and Little voyages deeper into the wilderness, the film transitions into magical realism.

The Biscuit caught up with Chuck to learn more about the making of Frontier, which you can watch in its entirety here.

Where did the idea for Frontier come from? Was it a singular voice or did the entire crew work influence it?

Elliot initially came to me with the idea after having his first daughter. He was thinking of how important the relationship between a father and daughter is, and what could happen if that relationship wasn’t set in an ideal situation. I read the earliest version of the script and helped flesh it out to get it to production. 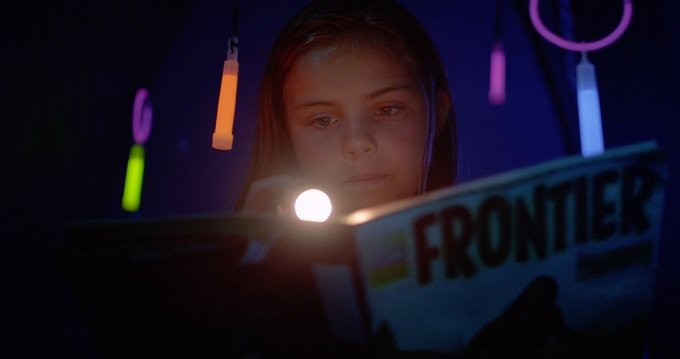 The location was integral to the story. Did you write the script (or adjust it) after scouting or did you just adjust as you go there?

We always knew the production would happen in Wilmington. I took a few scouting trips there with Elliot. We looked high and low. I think we got lucky in finding exactly what we needed to make the film look unique and otherworldly at times. Several locations happened through crew connections.

What’s the story with the boat graveyard? How did you find that?

It’s a funky place called Grahamland on Hwy 74 as you approach Wilmington. The owner, Hubert Graham, takes old boats and harvests the fiberglass to make these sculptures that vary from normal animals to giant cowgirls. He sells these pieces of art, but his ultimate hope was to make a mini-golf course. Hurricane Florence set him back a bit recently. Most of the animals we filmed were sold or destroyed but he’s still there.

Zoe Clarke was an incredible actress. What was she like to work with? What was the audition process like? What’s next for her?

She was incredible to work with! Zoe instantly embodied the character of “Little”. She became friends with everyone on the crew and she persevered through long days of eating cold Spaghettios, 105-degree summer temperatures and a freak 32 below snow day wearing shorts! Zoe carries about 95% of the story, if we had not cast that part right the whole film would have fallen apart.

The film ends on an uncertain note. What’s next for our heroine?  Did she defeat the beast…or was she captured by him?

We are constantly asked by audience members, “What happens next!?” and I’m overjoyed that the film warrants that ask. The message that is important to me and that I tried to convey in the making of the film is that “Little” took a chance. She went out on her own to find a better/different experience of life and in that process she grew as a person and went through a metamorphosis. Even though she is essentially returning to where she was at the beginning of the film with her guardian…she’s not the same. I tried to hint at this visually by bookending the film with Easter eggs in using the caterpillar at the opening and the butterfly that is in Zoe’s hair at the end. 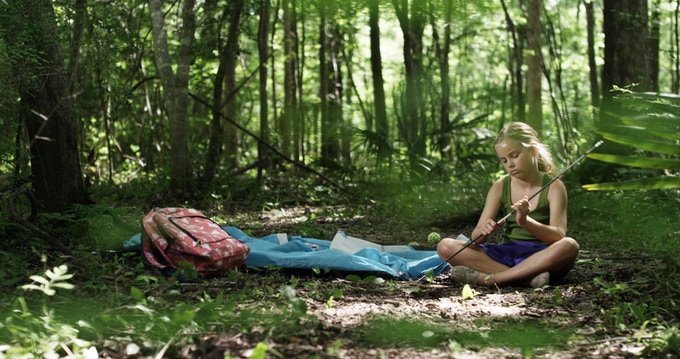 What were the biggest creative lessons you learned on this film?

I feel that in every creative endeavor there is something to be learned and a notch in the belt to carry forward. For this film the one that stands out the most is: Don’t Start Production until you have a beast that is camera-ready! I believe The Predator had similar difficulties. We went through two other versions of “The Beast” that did not work. It delayed production several times for over 6 months with the “Frontier” almost being shelved permanently. Production became a race against the clock before Zoe grew up!

At the end of the film, you dedicate it to four family members. How important was that to you?

Both Elliot and I had friends and family who were close to us and supported us that passed away during production. They did not get to see the film and it seemed only fitting to dedicate it to them and their memory. 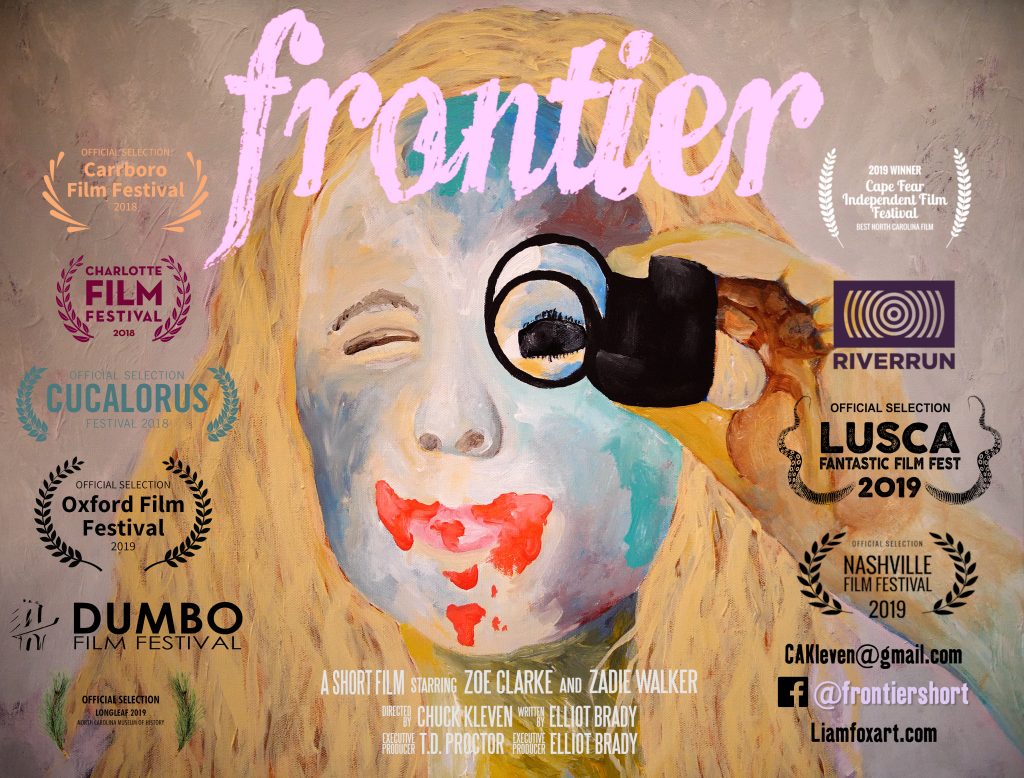 The Frontier poster was designed by Charlotte artist, Liam Fox.