Charlotteans Needed to Round Up Tiny Pitbulls

You never know where they’ll turn up or how they’ll infiltrate your daily routine. But, they will. They’re everywhere … and they’re regal.

What does all that mean? Picture this.

You’ve decided to be a hometown tourist and head out and explore the Queen City. You hit up the Disco Chicken in front of the Bechtler Museum, interact with some murals and grab some pics at Romare Bearden and the panther statues at Bank of America Stadium.

Before you leave, you review the photos on your phone and you see it: There’s something bright blue in the mouth of the panther. You head back over to reach into the fangs of the beast and pull it out. It’s a hand-painted, wooden magnet of a pitbull wearing a crown!

You have found one of the Queen Pitty magnets that have been hidden around town thanks to Michael Sullivan. 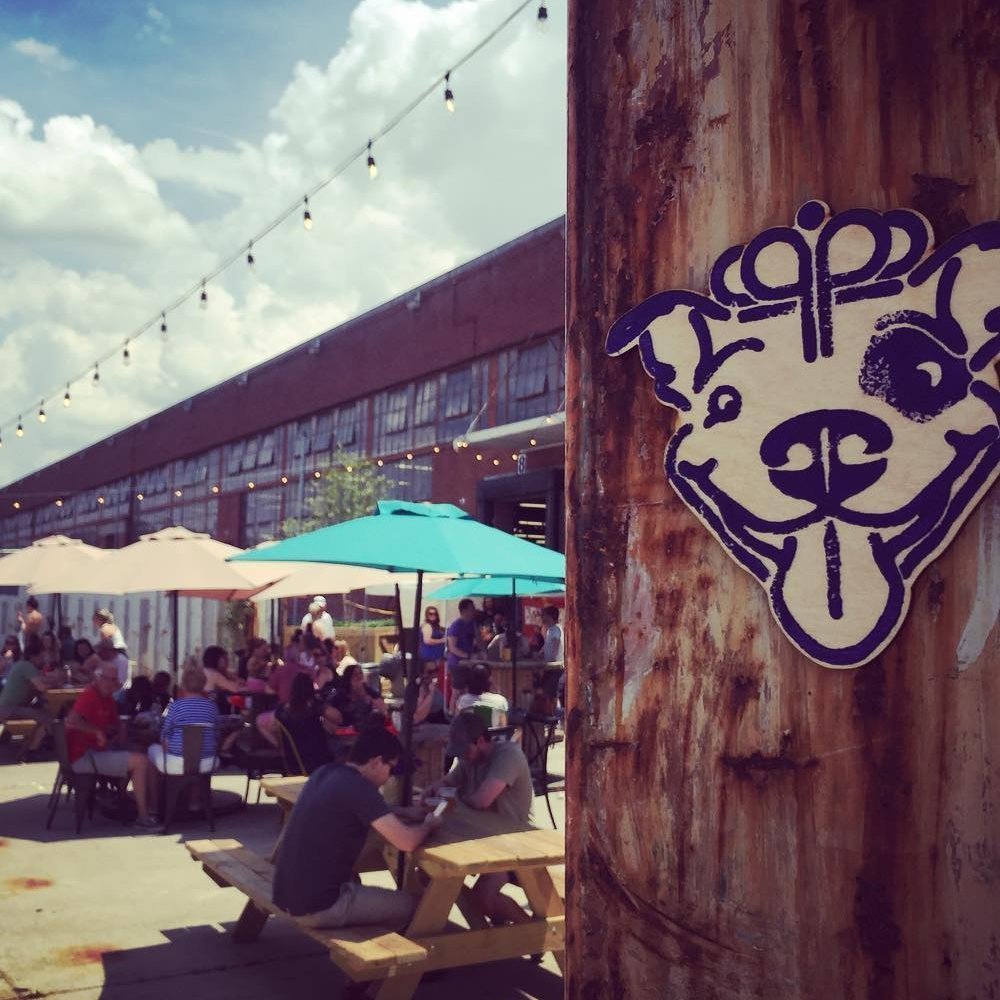 One of Charlotte is Creative’s HUG Grant recipients, Michael is the mastermind behind Queen Pitty, hundreds of free magnetized pitbull heads hidden around the city. And if you haven’t seen one, look a little harder. They are out there, ripe for the picking.

“It’s basically a city-wide scavenger hunt that is focused on local artists, fueled by social media and absolutely free to participate in,” said Michael.

Michael was inspired to start the project after discovering #FreeArtFriday during his time living in Atlanta. The idea behind #FreeArtFriday is for artists to make small pieces of art, and hide them around the city, while sometimes providing clues for the location on their social pages.

From the moment Michael found his first piece of art treasure in the wild, he knew he needed more of it in his life. “I found my first piece quite by accident, looking up at the right time and curiously inspecting a hand-painted magnet. A note on the back explained #FreeArtFriday and I was immediately hooked. I told my friends and we began excitedly hunting for free art. Eventually, I decided to take a shot at dropping my own art, and in doing so went from Taker to Maker.”

The pieces can be anything. They can be a magnet, a small painting, a wood carving. Anything. Clues can be given or the artist can choose for the piece to be totally hidden, awaiting the lucky soul that will stumble upon it. The art doesn’t even have to be dropped on a Friday. There aren’t any rules to #FreeArtFriday. Well, that’s not entirely true … the only rule is finders keepers, losers weepers. (Meaning, if you find a Queen Pitty, you can take her home or hide her somewhere else.)

HIDING PITTIES TO FEEL AT HOME IN THE CITY

When he moved to Charlotte in 2015, Michael wanted to bring that same free art love with him. The design of his pieces are based on his late dog Bailey wearing his take on the crown logo our city is known for. The name Queen Pitty is a fun play on the nickname Queen City.

Not long after, he started making the colorful wooden magnets and hid them around the city with the hashtags #FAFCLT (Free Art Friday Charlotte) and #FreeArtCLT, to encourage others to join the movement. If you find a Queen Pitty out in the wild, be sure you tag Michael so he can see that his wooden pitties have found their forever homes or new hiding places.

“I’ve been tagged by so many people that have found pieces, and their excitement and enthusiasm is 100% the reason why I do it,” said Michael. 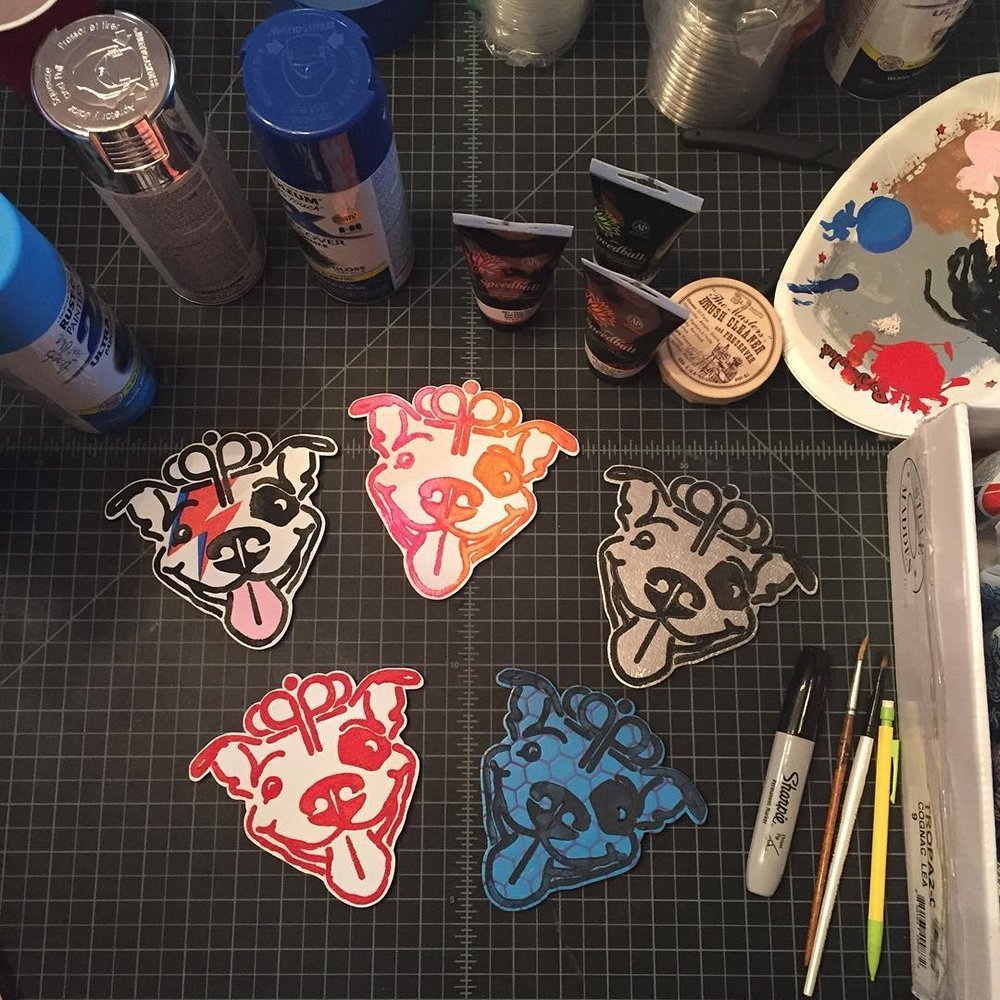 He hopes #FAFCLT will bring out the kid in all of us. “We simply don’t afford ourselves the opportunity to explore that as we grow up,” says Michael.

Free art may be free to take, but that doesn’t necessarily mean it’s free to make. Michael used his HUG Grant to purchase raw materials to make more Queen Pitties for lucky Charlotteans to find as they venture around town. The grant went towards wood, sandpaper, paints and magnets for the pieces. Michael was also able to have a brand new Queen Pitty stamp made to help streamline the process and ensure the Pitty’s smiling face made it perfectly to each piece.

“I’m not a career artist, my work isn’t hanging in galleries. I’m simply sharing smiling puppy faces with the public at large. Art is an expression of the artist and these expressions don’t all have to be breathless, magnum opus centerpieces, draped in layers of deeper meaning and tucked behind velvet ropes in a museum. Sometimes, it can be a simple reminder to a complete stranger that occasionally, happy surprises can happen to them,” said Michael.

WHERE IS QUEEN PITTY HEADED NEXT?

What’s next for #FAFCLT? Well … Michael thinks that is up to you!

“My main goal is to encourage other people to join the Free Art movement through #FAFCLT. Go out and hunt for art! Make your own art drops and hide them around town! However you express your art, make something and share it with the public. Create a moment of excitement for a total stranger, and make the world that much happier!”