@CLTBlackOwned has Pride, Purpose & a Plan

“We really are in this to serve others and support and highlight their business so it can increase their sales.” – Ashley Creft

Amidst demonstrations about the death of George Floyd, discussions of how to dismantle systemic racism, ensure conversations don’t die, bring about meaningful policy change and create more opportunity Black entrepreneurs and creatives, many of us have been left asking, “What do I do? How do I help?”

Charlotteans Jeff and Maddy Carothers and Ashley Creft were there, too.

And, they had an idea: Support Black-Owned Businesses.

Others had similar thoughts, but Maddy, Ashley and Jeff went to work. On May 31, they launched @CLTBlackOwned on Instagram with this message: 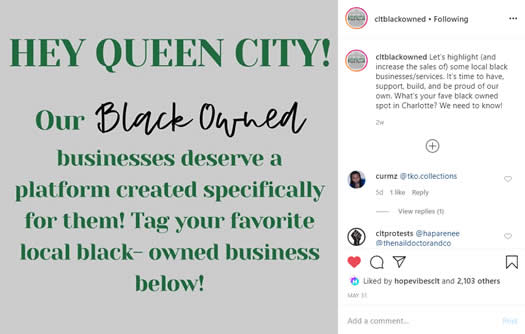 The trio set an initial goal of getting 1,000 followers on Instagram they could use to promote Black-owned Charlotte businesses. This one post blew up and they reached 10,000 in under a week and have been using their audience to profile a new business every day.

“We just wanted to do something small and local that we could see the change in,” said Maddy.

The impact has been immediate. One of the businesses they’ve featured, @CLT.Rollie, a culinary company that makes a wide array of egg rolls like mac n’ cheese and BBQ chicken from a family recipe, got so much business it crashed their website. They had to stop taking orders that day.  Since being featured on @CLTBlackOwned, they’ve grown from 160 followers to more than 1,000.

And, @CLTBlackOwned is just getting warmed up.

A Powerful Friendship Empowers Others

Jeff and Maddy are native Charlotteans who were high school sweethearts at West Charlotte High and married about 18 months ago. Maddy and Ashley met while interning 10 years ago and is like a member of the family. They know each other well. And, that made handling the overwhelming response to @CLTBlackOwned possible.

In addition to chronicling more than 1,000 Black-owned businesses that users have suggested since May 31, they’re getting more than 100 direct messages on Instagram a day. They work interchangeably on answering DMs and managing research and they’re working together to sort and map all of the businesses suggested and build a website.

“Everbody has been very supportive. We’ve had so many people reach out and say they want to help or give back in some way to what we’re doing,” said Ashley. “Right now our goal is to continue to highlight a business a day. We’re in it for the long run.” 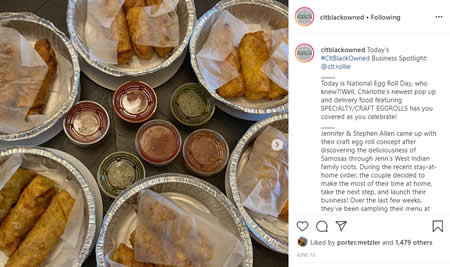 They may be running to catch up, but the @CLTBlackOwned team isn’t planning on reaching the finish line any time soon.

“We’re trying to plan out our calendar over the next year. It’s not about us or even about Charlotte. It’s about changing the conversation so that Black businesses and Black people in our city have equity and the support of Black and non-Black people,” said Maddy.

That’s something they take very seriously, bringing people together in a sustainable way. For them, this isn’t about boosting a business’s sales for just one day. It’s about showcasing viable businesses that people across the city need to patronize and frequent because they’re good at what they do and deserve the patronage. It’s about making supporting Black-owned business into “business as usual.”

“This is not a page we want you to come to feed into that white guilt you may be feeling at this time,” Ashley says. “This is something that needs to be changed within Charlotte and within our community …”

That’s something @CLTBlackOwned hopes will resonate across the Queen City and beyond. In fact, they’ve already started counseling other cities on how to start similar efforts in their communities.

“The positive effect it’s having … it doesn’t have to be Charlotte,” said Jeff. “It can be worldwide.”

Hear from the Talented Trio

To complement this story Tim Miner conducted a Biscuit Blitz with Maddy, Ashley and Jeff. What was supposed to be a 5-minute interview became 14 minutes about friendship, getting active in the community and plans for the future. Give it a watch, if only to hear Tim, for some strange reason, say the word “beautiful” 487 times in the interview.