From the Stage to the Boardroom: Using Improv as a Corporate Tool

You may only think of improv (or improvisation) as being a form of entertainment, but you’d be wrong.

Improv has been used as a tool to improve communications skills and confidence for introverts, people with speech impediments, etc. Now, improv is finding its place in boardrooms and in corporate culture.

Jenn Grabenstetter is the vice president of Global Brand & Content Marketing at Sealed Air, a packaging company whose products protect your food and other day-to-day items (bubble wrap, anyone?).  Jenn’s role has her managing two teams ­­– the company’s content and creative team (videography, photography, copywriters, graphic design, etc.) and the digital marketing and operations team (website, digital platforms and analytics).

As a former magazine editor who made the switch to the corporate world, Jenn tries to bring creative energy and spirit into her professional life, as well as into the lives of her team.

But, there’s a lot more creativity in Jenn … and she indulges it. In addition to her role with Sealed Air, Jenn is a performer and improv actor. And, she incorporates improv into her day-to-day life at Sealed Air.

Replenishing her creative powers with performance 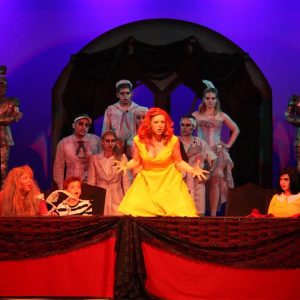 Jenn in “The Addams Family” at Theatre Charlotte

Jenn started doing local performances in 2008, when she had a role in Clue: The Musical at Matthews Playhouse. She has since performed with six different groups in the Charlotte area, usually comedy or musical comedy roles. Recently, Jenn has been working with the Comedy Arts Theater of Charlotte or CATCh.

“Performance is my personal passion,” Jenn says. “It’s my yoga, my running, the stuff I make time for in my life because it is restorative and creatively fills my tank more than anything else I’ve found. And, because that is part of my personality, my team knows that about me. I don’t make them come see me in shows, but I strongly recommend it.”

Although in the field of communications, Jenn started bringing elements of improv into her team dynamics. Jenn may start a team meeting with some improv games or a form of scene partner work where they have to try to communicate with each other through body language, intent and tone.

“It’s easy to get a little bogged down by bureaucracy and the politics of having to be in the corporate office everyday,” Jenn says.  “So with my team, we use some elements of a different type of creativity, which comes from my life as a performer.”

Although the initial reaction of her teammates was “abject horror” when she first invited everyone to stand up to participate in an exercise, they have now accepted and embraced this practice.

“I think my team is pretty used to the wackiness that I bring in now and it’s become a part of how we, as a team, communicate with each other,” Jenn says.

“It’s about trust and taking risks, and it is also about being a more collaborative communicator, not just how you communicate with each other, but with our stakeholders. We are trying to guide them and to influence them. A a way you can do that is really influencing them through empathy and getting them to a yes without coming to a crashing halt.”

Proudly Proclaiming Failure … in front of your co-workers

One game from CATCh that Jenn has employed with her team is to have them stand in a circle and take a turn loudly and proudly declaring a recent failure.

“Someone stepped forward and said they bought yogurt at the store and then got home and realized they already had yogurt. Now they had way too much yogurt. She was mad at herself, but it was funny and real. After each person declared their failure, the rest of the team gave them a loud round of applause and shouted out positive messages affirming their failure.”

According to Jenn, the purpose of this exercise is for team members to have a moment of commonality — everyone has failures. It is silly, but incredibly humanizing and puts everyone at the same level. “We are all flawed individuals, let’s accept that and now let’s get to work,” she says. 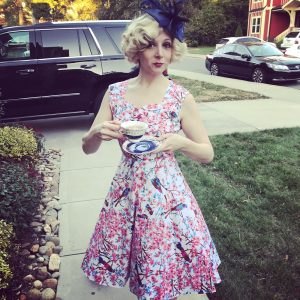 Jenn in a Halloween Costume

Improv teaches agility. When someone asks a question, throws you a curveball or gets heated, the skills you’ve learned help you shift scenes and act quickly. Improv allows you to be prepared to adapt to whatever is happening in the room, meeting, or your surroundings.

“One of the more insidious things to happen to corporate culture is PowerPoint,” Jenn says.

“PowerPoint fools you into thinking that you have control of how the conversation is going to go. You’ve written a story and you think you’re going to present it like you planned or rehearsed … that never happens. Your time slot is cut from 20 minutes down to two, or you present after a heated discussion, and there is always someone who wants you to jump to the end or asks a question that knocks you off your game because you weren’t prepared.”

“That’s one of the things that frustrates me about the corporate world — when I see really smart, capable people brought down by the fact they want to go through their slides. People will ask a question and you want to say, ‘I’ll get to that in just three more slides.'”

“You have to go where the scene is going and not push it back to where you were. We don’t own the narrative with PowerPoint,” says Jenn.

Establish Your Role and Change the Direction 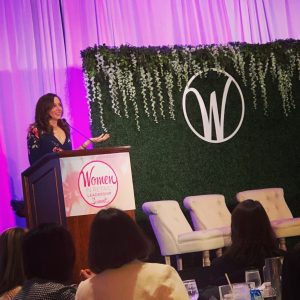 Jenn addressing at the “Women in Retail” conference

Jenn suggests that everyone could be more successful professionally and personally if we treated everyday like it’s an improv scene. Sometimes your role is assigned to you and other times you have to walk into a scene and decide what you are bringing to it and what your role will be that day. You have the choice to establish your role and change the direction of the scene.

“[E]veryone of us if ‘faking it’ to a degree. So, if you can actually not just fake it, but perform it, you can gain a sense of control and influence when you would not normally have any. That’s improv… it gives you more control and takes away some of the unexpected,” she says.

“In improv, everything you’re given in a scene is a gift to work with, everything has a possibility of driving yourself forward. If you’re in your head too much and not paying attention to your audience, you may miss your objective. Listen to them. You may get the key to changing the scene and turning it all around.”

Interested in learning improv basics to help you in your personal and professional life? Here are some tips from Jenn.

Try Your Hand at Improv

Here are some Charlotte groups that can help you hone your improv skills.