“We are SO grateful that Charlotte is Creative introduced us to Rosalia, a powerful force for beauty and storytelling in our community.” – Liz Clasen-Kelly, CEO of Roof Above

You never know how your work will affect other people. In late 2020, we wrote a story here in The Biscuit about Liz Clasen-Kelly and the work she and Roof Above were doing to convert an 88-room hotel on Clanton Road into fully-furnished apartments. These apartments would serve as permanent supportive housing (as well as on-site support services) for people experiencing chronic homelessness in Charlotte.

Local artist and activist (she calls herself an “art-ivist”), Rosalia Torres-Weiner, read the story and asked us to connect her to Roof Above. She wanted to paint a mural to add beauty and vibrance to the lives of those who would make their home at the new facility. 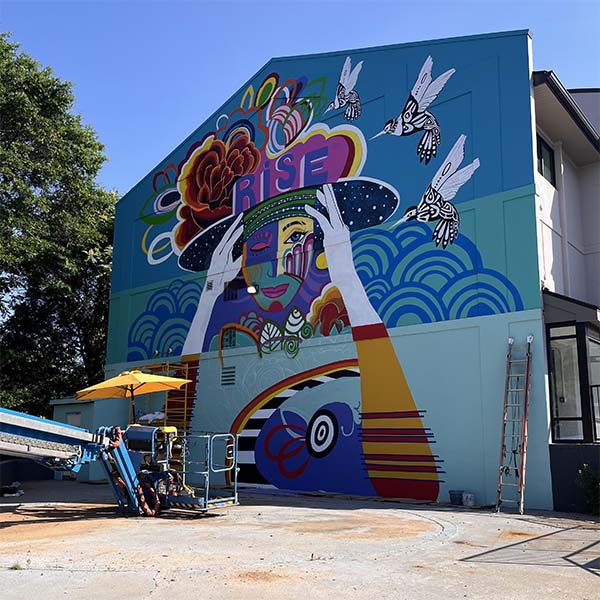 Charlotte Is Creative, publishers of The Biscuit, introduced Torres-Weiner to Clasen-Kelly and helped seed the project with a $1,000 Bear HUG provided by The LendingTree Foundation and additional materials support from Lowe’s.

Over a year later, the former hotel, now called Rise, is preparing to open and an incredible, three-story mural from Torres-Weiner will be there to greet them.

“Rosalia’s mural speaks to the hope and dignity we believe SECU will provide to those who will become tenants,” said Clasen-Kelly.

Roof Above staff and guests helped brainstorm the design of the mural, which Torres-Weiner says is about finding a new path to growth. The work centers on the face of a woman with one eye closed and the other open, which Torres-Weiner said symbolizes the sentiment: “I got your back.” Hummingbirds fly around at the top of the mural. These are a constant theme in Torres-Weiner’s work. In her words, they are the people who come to help you – the “wise voices that come to you during your journey.”

The work took over two weeks to complete. Torres-Weiner was assisted by a team of helpers – her own “hummingbirds”:

“I want people to take their selfies in front of this path because this is what it is — a new place, a new beginning,” said Torres-Weiner.

She wants people to note that the top of the mural was designed to blend into the sky above because “I want people to know the sky is not the limit.”

See more photos of the mural below.