The Queen City Podcast Network Gives Us Something to SHOUT About

Brian Baltosiewich is a busy man. Between running the Queen City Podcast Network (QCPN) and serving as Director at the Carolina School of Broadcasting, Brian has devoted his life to the creation of media.

“This is all I’ve ever wanted to do. And, I’m not sure what I’d be doing if it didn’t involve media and content creation,” said Brian on his roles in the media world.

Either role would be a full-time position in their own right and Brian balances both … as well as cameras, soundboards, software, and most importantly, microphones.

That balancing act has become a bit more precarious over the past month under the stay-at-home order. Brian’s living room has been transformed into a temporary classroom, a broadcasting school and a podcast production studio.

Before sitting down for a video call to share a moment of his busy life with me, Brian spent the day orchestrating Carolina School of Broadcasting classes from his living room command center. 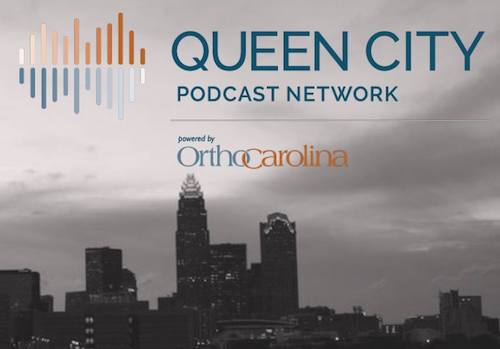 Minutes into the call, Brian had to throw on his podcast producer hat as one of QCPN’s podcasts needed help setting up their remote recording software, Zencastr. And, directly after our call, he’d was off to produce a different podcast before calling it a day. Oh, and did I mention that he helped launch a brand new podcast earlier that afternoon, too?

Rain or shine, pandemic or business-as-usual, nothing will stop Brian from ensuring his students and the members of the QCPN have the platform to share their voices and ideas.

But, what exactly is the Queen City Podcast Network? And, how did it get started? To answer that, we need to take a quick trip to Arizona.

Once Upon a Time in Tuscon

Brian began producing audio for the internet back in 2001 in Tuscon, Arizona while working for a local sports radio station. The University of Arizona was hosting a club-level hockey tournament. At the time, there wasn’t much hockey happening in Arizona and the team ended up gathering quite a following.

The tournament was sold out and the people who couldn’t make it into the arena still wanted a way to experience the games. Through the Arizona Daily Star’s website, Brian live-streamed the audio of the 4-day 16-game tournament. The livestream was so popular that it ended up crashing The Star’s website multiple times over the weekend.

“After that, I started to think there was an appetite for audio content on the internet. But, what does it look like? How do we build from this?” said Brain.

Over the next two decades, Brian figured out how to build from that experience. In 2009, he began recording shows at home with friends wh owere victims of Clear Channel Radio’s (now iHeart Radio) wave of layoffs. They formed a network called Radio Exiles with over 18 unique shows every week.

In 2010, Brian and his wife moved to Charlotte when he took a job in marketing at WBTV. He continued running Radio Exiles for a few years after moving to the Queen City, but eventually shut the network down.

“At the time, podcasting wasn’t a viable career choice. It was still kind of frowned upon,” said Brian.

Shortly after ending Radio Exiles, Brian approached The Sporting News about producing a sports talk podcast. The Charlotte-based sports news website gave him the green light. For the next few years, he produced the pod in his free time from WBTV. Unfortunately, the podcast never took off. 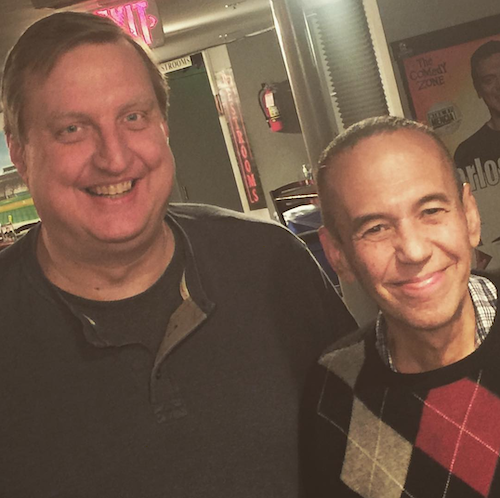 Brian and Gilbert Gottfried after recording an episode of The Comedy Zone Podcast.

“Finally I got tired of pushing the rock up the hill. I still definitely thought there were opportunities,” recalls Brian. “I’ve always been a never-quit kind of guy. Just keep plugging away, if you work hard enough eventually good things happen.”

It was time for Brian to find his next project. After befriending the general manager of The Comedy Zone, he had an idea for a podcast.

“You have A-list comics coming in every week and they do a radio tour every Friday morning anyway. Why not make this a part of the radio tour?”

Thus in May of 2015, The Comedy Zone Podcast was born with Brian at the helm as producer and five years later it’s still going strong. Listen to their first episode with the one and only Bob Saget, here.

The Comedy Zone Podcast is the cornerstone of the Queen City Podcast Network. While working on the podcast, it sparked Brian’s interest in creating a local network focused on the happenings and the creatives of Charlotte.

“When people launch podcasts, everyone wants to be global, but no one is really focusing on what’s going on here in town.”

His idea was to bring together 5 local podcasts into what he describes as a “formally, informal podcast network.” At the time, Brian was already producing The Comedy Zone Podcast and The Yelp Charlotte Podcast. He extended invites to The Charlotte Podcast, Cheers Charlotte Radio and the no longer-running Local Vibes Podcast.

The founding five gladly joined forces under the banner of the Queen City Podcast Network in 2018. “The idea was everyone cross-promotes each other. Everyone’s numbers spiked and the concept worked.” By the year of the network had 9 podcasts.

In October 2018, the network gained the attention of OrthoCarolina and the organization decided to go all-in as the title sponsor. After a soft relaunch in January of 2019, QCPN exploded across the Charlotte podcasting scene. This allowed QCPN to become the first hyperlocal podcast network in the country to be operated as a business.

Today, the network has 27 podcasts, the most recently added being The 704 with Julian Council, a sports podcast that launched on April 21st. Two-thirds of the network’s podcasts are produced in-house, including Julian’s. Listen to his first episode here and see the full list of QCPN podcasts here.

“Does it fit on the network? Is it about Charlotte, first and foremost? And, how does it fit into what we’re trying to do? Is there a gap in our programming?” says Brian on bringing in new podcasts. “There is a quality level we expect from our shows.”

The Future of the Network

Last May, QCPN participated in Charlotte SHOUT, a celebration of arts, music, food and ideas. If you need something to help celebrate ideas, QCPN is a treasure trove of unique personalities and perspectives in Charlotte and the network was a perfect fit. 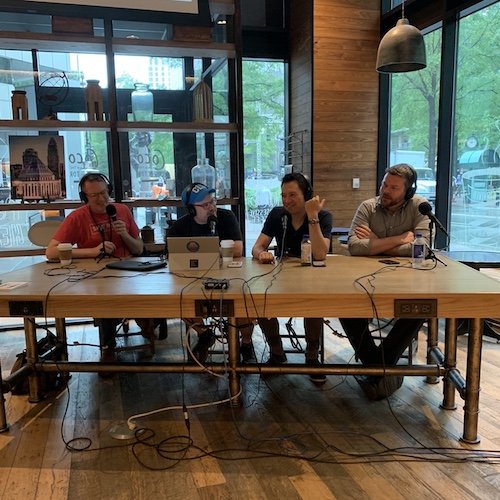 QCPN’s role in the festival involved live recording podcasts at Coco and The Director, a coffee house and co-lab located Uptown at the corner of Trade and Tryon. Brian recorded 21 podcasts over the three-day event. The network’s time at the festival was a success and it got Brian thinking toward the future.

“It really helped me see, mechanically, how a larger scale podcast festival might work here in Charlotte.”

As a result, QCPN has teamed up with Blumenthal Performing Arts, WFAE and podcaster Perrine DeShield to get the ball rolling on the first Charlotte Podcast Festival. The event is scheduled for October 2020, but with events being canceled left and right, that could change.

As the city awaits the first Charlotte podcast festival, there are 27 podcasts rich with voices and ideas of some of Charlotte’s finest ready to be binged.

From crashing The Daily Star’s website in 2001 to assembling an all-star network of podcasters in 2018 to planning a full-blown festival celebrating the auditory art of the podcast, Brian has come a long way and he’s not stopping any time soon.

“The internet came at the right time for me. It’s been a long haul and it’s been really, really hard but 20 years later it’s starting to pay off.”

Brian Baltosiewich is a busy man. And it’s definitely paying off.

This Queen City creative profile is the first in a nine-part series titled “Something to SHOUT About,” where we will interview various Charlotteans about their creative journeys and the work they are doing today. This series is sponsored by Charlotte Center City Partners and Charlotte SHOUT.

To keep in line with the four pillars of Charlotte SHOUT, the profiles will focus on the categories of art, music, food and ideas. Brian Baltosiewich and the Queen City Podcast Network are the embodiment of the various ideas and perspectives Charlotteans bring to the table.

This Biscuit CLT Podcast is a proud member of the Queen City Podcast Network. Binge our interviews with Charlotte’s creatives here.