The Great Wall (of Pumpkins)

The phrase, “Build the wall,” has come to have certain connotations – either positive or negative – depending on your political leanings. But in historic Elizabeth during this time of year, “Build the wall” means one thing. And unlike the political arena, this is rated “E” for “Everyone.”

The Great Elizabeth Pumpkin Wall is constructed every year, without controversy, before Halloween. It doesn’t involve an act of Congress, but it does involve enterprising and dedicated neighbors willing to donate their time and muscle to the cause.

How does it happen? “With what seems like 3,000 screws, some rope, a couple of rickety ladders and a whole bunch of awesome Elizabeth neighborhood volunteers,” is how John Short, an Elizabeth resident and the current de facto leader of the group, described it.

It all started in 2004, when John Kerry and George W. Bush were vying for president. (When I mentioned the Wall, I didn’t inject politics into this story unnecessarily. It actually has a political element to it.) 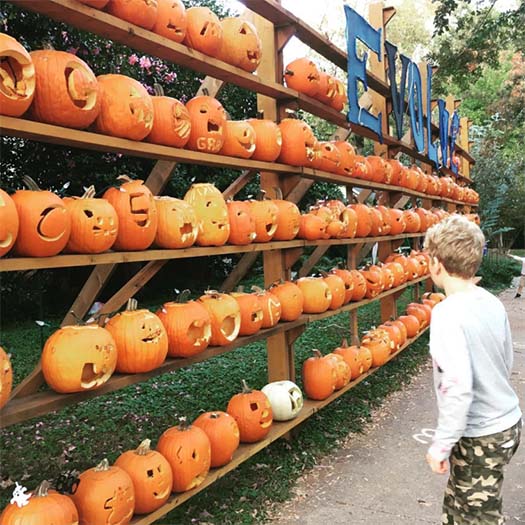 A group of amateur woodworkers in the neighborhood, who called themselves the “Woodchucks,” came together to “display their support for John Kerry,” Short said.

And the fact that two spooky things – Halloween and elections – happen around the same time led them to add a Halloween element to the Kerry wall … apolitical pumpkins!

“They kept it going for years after that,” Short said. “In the early years, it always had a political slant. In election years, the name of the [presidential] candidate was part of it. The wall with Obama was featured in The Wall Street Journal in ’08, and legend has it that in 2012, Obama drove past and looked at it, but I’m not sure I can confirm that.”

We can confirm, though, that Southern Living has published a feature on Elizabeth’s famous wall. One that’s intended to bring people together – not keep people out. (Oops. Too political?)

Was there any dissension in the neighborhood? Anyone for Bush, McCain or Romney who protested the Democratic candidate getting all the pumpkin love?

No. “I think the stats will support that 95% of people in District 1 are registered Democrats,” Short said. “It’s a reliable voting bloc.”

The wall remained a “Hallo-political” statement through 2012. In 2013, the Elizabeth Community Association (ECA) officially took over what had been an unofficial rite of fall and removed the political component. Since 2013, it’s “been just an awesome thing in one of Charlotte’s quirky historic neighborhoods,” Short said. 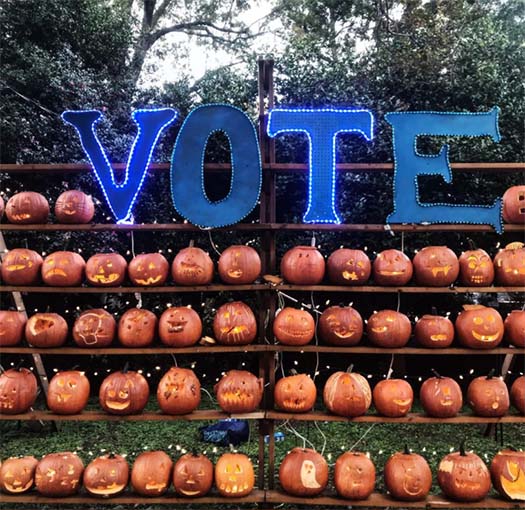 The wall’s location has changed over the years. This year, it’s a repeat of 2020. It’ll be set up at 2229 Greenway Ave. (at the corner of Greenway and Laurel). For many years, Charlotte actor and mime, Hardin Minor, hosted and spearheaded the wall at his home on Clement Ave.

The Woodchucks used to fund the building of the wall themselves. Now the ECA takes care of funding replacement boards when they’re needed. It takes a full day to construct the apparatus that will hold as many as 200 pumpkins.

COVID has altered the wall in one significant way. There’s no longer a come-one, come-all pumpkin-carving party. Neighbors can pick up their ECA-provided pumpkins, carve them at home and then bring them to adorn the wall.

Lighting the pumpkins the old-fashioned way – by candle – doesn’t work for a display that’s up for a couple of days. These pumpkins are stuffed and lit with strings of Christmas lights. “There’s an art to it,” Short said. “The same people put forth the effort every year just to give it that little extra glow.”

Why has the wall gained such a following? 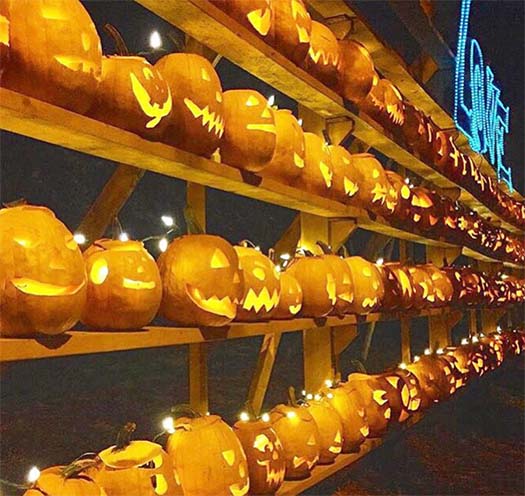 “It’s just a fun, unique family thing to do,” Short said. “It’s fun for all ages and is just a bit of seasonal whimsy. You get a lot of grandparents coming into town because it’s fun to see the energy and excitement of kids dressing up for Halloween … and I think the pumpkin wall attracts the same audience, and it kind of touches that same nerve.”

At a time when Americans are divided on nearly everything, the Great Elizabeth Pumpkin Wall is one thing everyone can agree on.

If they build it, you will come.

They’re building it this Sunday, Oct. 24, but the wall won’t be fully festooned with pumpkins until Friday, Oct. 29. It will be lit at 6:45 p.m. and remain lit and filled with pumpkins (weather permitting) through Halloween until Monday, Nov. 1. Stop by 2229 Greenway Ave. (at the corner of Greenway and Laurel) to see the Halloween marvel.

Elizabeth residents are invited to carve a (free, provided) pumpkin and place it on the wall. “But any and all are welcome to bring a pumpkin to put on the wall or stop by to see the wall and take pictures,” said John Short.