At the corner of Hawthorne and Kennon Streets, the mural was commissioned by Catherine Devericks, owner of The Culture Shop, a business that opened in the throes of COVID-19 in a space formerly known as The Downtown Convenience Store.

“I have lived in both the Belmont and Plaza Midwood neighborhoods and think both are special for so many reasons, but mainly due to the people that live there,” said Catherine. “My building was a bit run down and was slated to become a duplex if it wasn’t quickly reopened as a market. I liked the idea of keeping the bones of this neighborhood staple, but tidying it up a bit.”

Part of that “tidying up” (which took about a year) was always going to involve a new mural from Matt.

“From the first moment I was interested in purchasing the building I thought of Matt and hoped he would want to be involved,” said Catherine. “He’s a friend and extremely talented.   I think he was happy to choose the design; I was happy to hand that job over to him!”

Fun in a Dark Time

While 2020 has been a “year of hurdles” according to Catherine, the new mural has been a bright spot.

“I know he wanted it to be unique and I’m ecstatic that he chose to highlight important women in history,” said Catherine.

And, it appears to be a hit with neighbors, as well.

“I was thrilled to get feedback from Phaedra, the daughter of a neighborhood friend.  She told me she really liked it and shared details of the Russian Dolls she has at home.  It’s great that everyone can enjoy it,” she said.

“Overall, it’s had a nice reception.  I’m very happy with it!  I think it’s fun during a fairly dark time, but then again, there’s a lot more to it than meets the eye.”

Notes from the Artist – Matt Hooker

To explore the inspiration and meaning behind the mural, Matt Hooker shared some thoughts with us. 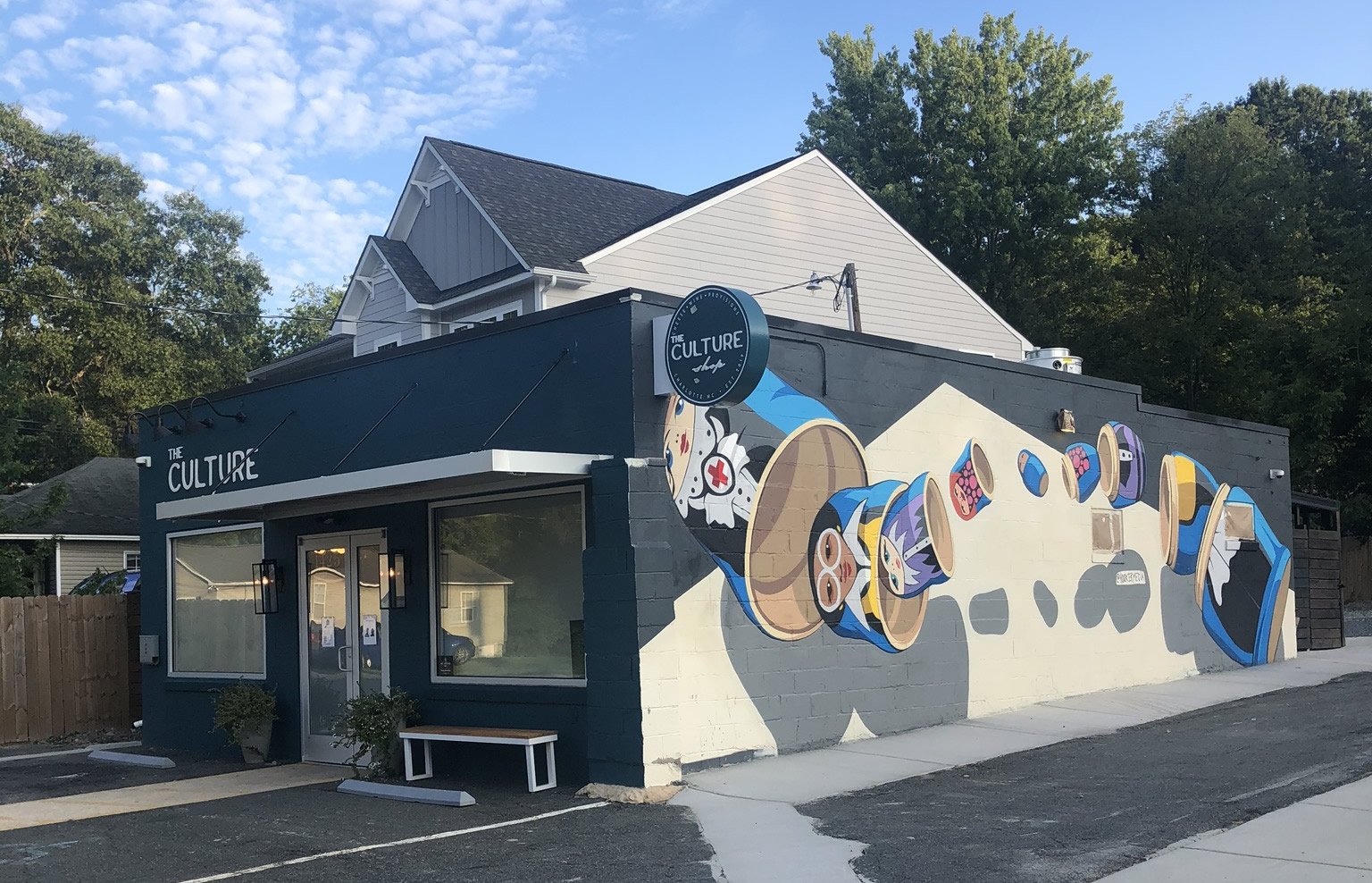 “The initial idea for the Matryoshka mural has been in my mind for years. I hadn’t seen one done before, though I know they must exist elsewhere. When Catherine approached me to do the mural, she was clear that it didn’t have to necessarily pertain to the business, which is a very refreshing client approach: art for the sake of the art.

As I worked on sketches the underlying concept started to take shape. The dolls needed to be shown individually to make it interesting and cover the space. Rather than standing them side by side I wanted them to careen through space. I actually used real nesting dolls positioned with hunks of modeling clay on a whiteboard to shoot the reference that I based the illustration off of.

The dolls typically represent femininity and the motherly side of things. 2020 is a year that the ‘I just want my mom’ feeling has been prevalent amidst the chaos. The way the dolls come apart and hurtle through space leaving the ‘baby’ doll vulnerable is a metaphor for this situation the world finds itself in. The family unit is divided and no longer whole.

On the positive side, the doll’s themselves each represent an impactful real-life woman.

From left to right they are:

I hope people not only enjoy the mural but are compelled to do a deep dive on all of these figures and learn about them.”

POP ‘ROUND THE CORNER TO CULTURE SHOP