This is the second installment of “The World Should Know …” a special series exploring a remarkable Charlottean through a written story, a podcast and an original work of art by a Charlotte-based creative made in honor of the subject. Today’s subject is artist Tommie Robinson. 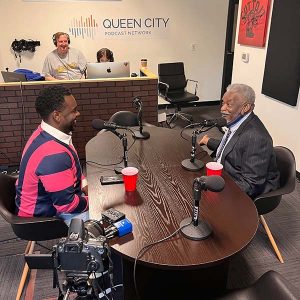 Growing up, I never truly understood my father.

This is, until I was old enough to understand how this nation was developed by the marginalization and exploitation of Black creatives. Creatives like my father.

Tommie Robinson is brash,  confident and unapologetic about how good an artist he is. When I was a child, those characteristics would often make me cringe. The narrative I was force-fed by the world was:  “Don’t spike the football. Don’t bask in your own glory.”

What I had to realize was that my father’s brashness was necessary. It paved the way for me to have the luxury of being more low-key.  That’s a luxury he paid for by how he lived his life and how he built his career. [Hear more about his artistic career as Winston interviews his father on the accompanying podcast for this editorial.]

AN ARTIST IS BORN, BUT NOT ENCOURAGED 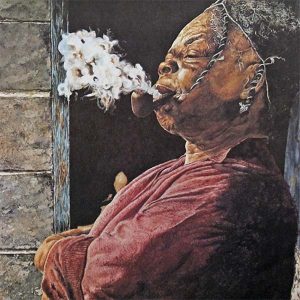 My father was born in rural Lumberton, N.C. in 1947. He was just seven years old when his own father passed away. After that, my father,  his mother and his younger sister moved to Charlotte.

Some of his earliest memories of  “big city life” were the lectures his mother would give him in preparation to make the trip to “go downtown.” These were survival guides for navigating one of the few spaces of racial interaction during a segregated, Jim Crow Charlotte.

“Don’t look any white people in the eyes. Don’t say anything when they call you names,” his mother would say sternly.

The only goal was to make it back home.

RACISM HURTS US ALL 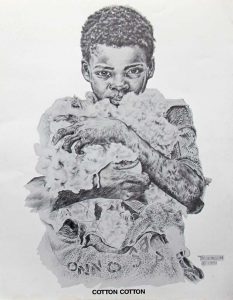 A sketch by Tommie Robinson

As I grew up, I would often ask my father how that felt. When I asked, I was hoping to receive the response I wanted to hear. I wanted him to be as infuriated as I was in merely listening to these tales of injustice and racism. But, he would simply shrug it off and tell me: “That’s how it was back then.”

The crazy thing about systemic racism is that it is not only limited to White people. It affects us all. It creates ideologies and misnomers which have been deeply embedded into all of us. This was made evident to my father during his junior high school years when a strong desire to draw and paint was nearly becoming an obsession.

While his mother would always be a nurturing and encouraging voice, his teachers (at an all-Black school, mind you) would often tell him that he should spend his time on something more productive. An artistic career, they believed, wasn’t going to happen for him

To them, Black people simply could not be artists. Art is a distinction of class and intellect. Even when the teachers were Black themselves, they were conditioned to believe Black people could not occupy space within the art world.

Even today, my dad reflects on the sentiment as if they were telling him, “You can never be an artist. You will only be a n***er  who can draw.”

A HARD HEAD AND A WIDER PERSPECTIVE 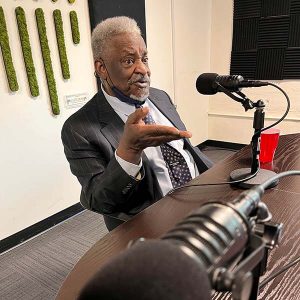 Tommie Robinson recording the podcast featured below in 2022.

Though he was never discouraged from creating, joining the army showed my father what was possible.

Being stationed in a racially integrated Europe for the majority of his enlistment period, he was able to gain access to some of the world’s greatest museums and libraries. Being in Europe gave him an understanding of what it is to be human.

“There weren’t multiple standards set for variations of people,” my father said.

Along with this newfound access, he also traveled extensively throughout Europe, indulging in the breathtaking views of the European countryside and gathering inspiration to pursue art as a career.

He began by earning commissions to create portraits of high-ranking army officials on base. His services became so in demand, that he would eventually earn more money from portraits than his base pay. [Hear more about his artistic career as Winston interviews his father on the accompanying podcast for this editorial.]

HE HAD TO BE BRASH

As my father returned stateside with a new outlook and perspective, he would find himself in a very different version of Charlotte that was in the midst of the Civil Rights movement. He adopted a demeanor in which he would not be prevented from creating a space for himself and other Black artists in a world of fine art.

He has continued to be all of these things for well over 50 years, blazing the trail for younger Black artists to be able to exist merely as artists.

He willed himself to be a working, career artist then. And, he still is today. 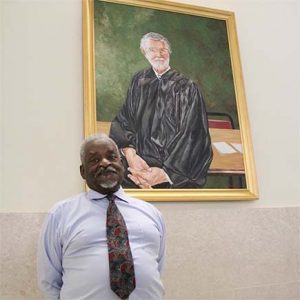 THERE’S MORE TO THE STORY

Enjoy a conversation between Winston Robinson and his father, Tommie Robinson, about building a career as a Black artist then … and now. 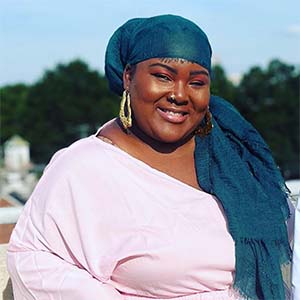 Enjoy a spoken word performance entitled “He Knew” from Hannah Hasan created in Tommie Robinson’s honor as a complement to the story and podcast.

“The World Should Know…” is a special content series developed by Charlotte Is Creative in partnership with Tom Hanchett and Winston Robinson and sponsored by the North Carolina Humanities Council.

It was created to help keep stories of Charlotte’s past alive — stories of neighborhoods and neighbors that have been foundational to our past, but are in danger of being lost to time in our future.

Enjoy the conversation. Remember the story. Share it with someone else.