The writing’s on the wall

“We Are Hip Hop” is more than a mural. It’s an ongoing celebration of local hip-hop culture – a unique culture that helps elevate Charlotte. (“We don’t want to be a baby Atlanta,” Dammit Wesley said.)

Every letter tells a story.

The new Camp North End garage door mural – produced by Bree Stallings and created in collaboration with local artists, Blumenthal Performing Arts and Camp North End – contains nine letters on nine panels, plus a 10th bonus panel with a hand-painted version of the “We Are Hip Hop” logo. 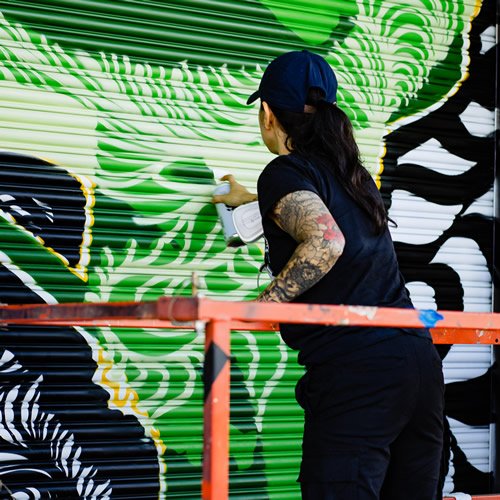 Each letter in C-H-A-R-L-O-T-T-E was painted by a different local artist in their own distinct style. The mural can be appreciated from a distance. But it really rewards you when you get up close.

Each artist has a message, and you won’t get it if you don’t view each letter as an individual work of art. (Note: There’s nothing wrong with appreciating Charlotte’s latest mural purely as a colorful Instagrammable backdrop. Blumenthal officials say that, even as a work in progress, the mural was attracting people and their cameras.)

Frankie Zombie, who painted the “E,” uses a lot of eye-popping pink to honor his mom who was diagnosed with breast cancer four years ago. “She’s still fighting,” he said. Zombie is originally from the Bronx, “where hip hop was created,” he said. His “E” is also an homage to Wu-Tang Clan and the graffiti-style lettering on their album art.

There’s a hip-hop history lesson in Dammit Wesley’s “R.” It’s done in the “Pen and Pixel” style – that’s the Houston-based graphic design firm that created album covers for many gangsta rap artists in the 1990s. The style sparked Wesley’s initial interest in graphic art. “It’s big and lavish and represented a ghetto resurgence,” he said.

Carla Aaron-Lopez, who teaches art at a CMS middle school, painted a “T” on what looks like a giant piece of white notebook paper. At night, with lights on, you’ll be able to see hidden messages not visible during the day. They won’t show up in a photo, either. You have to see it in person, after dark.

The best art isn’t just pleasing to the eye; it makes you stop, think, decipher. 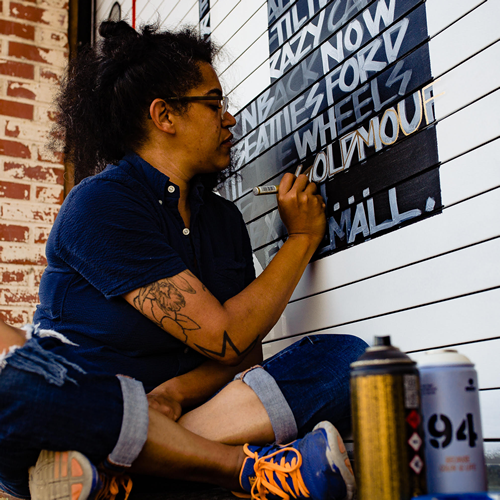 The story behind the mural starts with Stallings, multimedia artist, illustrator, writer and activist. She saw the bare garage doors and imagined them as blank canvases. Camp North End said “yes” to her request to turn them into a mural. Not only that, Camp North End matched the amount each artist would be paid.

“I assembled my dream team,” Stallings said about the artists she asked to be involved. Knowing and trusting the artists allowed her to give them complete creative freedom.

She took the center panel – the “L” – which she envisioned as a portrait and visual anchor. She painted “Elevator Jay,” a rapper and record producer she described as a “local legend.” His bearded visage confronts you; the soft yellow script “L” welcomes you.

The artists, the letter they painted and their Instagram links are below:

A View of the Final Piece by Will Jenkins

“We Are Hip Hop” is more than a mural. It’s an ongoing celebration of local hip-hop culture – a unique culture that helps elevate Charlotte. (“We don’t want to be a baby Atlanta,” Dammit Wesley said.) 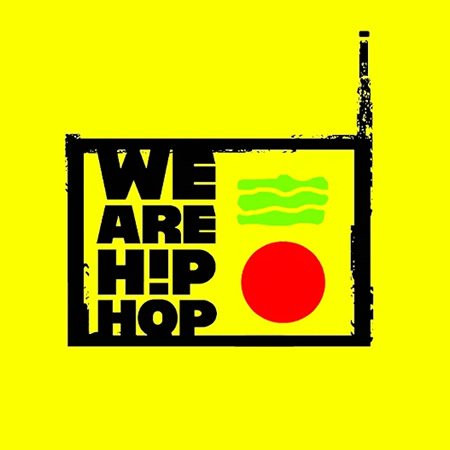 Activities – including pop-up performances, art installations, DJ battles and live b-boying – are all designed for social distancing and will take place throughout Camp North End’s campus throughout the weekend.

Greg Jackson, rapper, creative consultant to the Blumenthal and co-founder of the nonprofit Heal Charlotte, a place-based organization working on neighborhood revitalization, is helping identify local talent for “The Reveal.”

“There’s so much talent here,” he said. “We’ll have musicians, rappers, DJs, break dancers here for the event. It’ll be a celebration of every element of hip hop – but with a bigger focus than ever on talent that’s right here in our city.”

One of Jackson’s ideas was a DJ battle that will take place on Nov. 7. He said: “Come out, learn about the history of hip hop, see the potential of where hip-hop will go. And, then go vote.”

Sit a Spell Longer with We Are Hip Hop