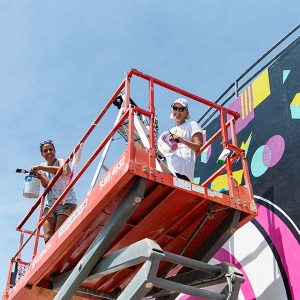 In a city known for knocking down businesses and erasing its history, the Ervin Building (also known as the Varnadore building) is an anomaly.

After nearly a decade of standing vacant off E. Independence Rd., the seven-story building, constructed in the 1960s by home builder Charles Ervin, is currently being renovated, not demolished. And, a bit of its history – and the community around it – has been captured in a new mural created this summer by local artists Eva Crawford and Hilary Siber.

Adding Art to the Mix 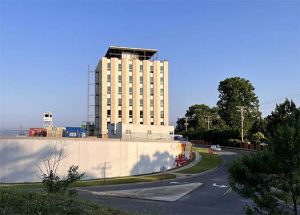 The Ervin Building & wall prior to completion of the mural

Two years ago, a project manager with GVest Capital approached Crawford about the Ervin Building’s restoration. They are long-time friends. He asked her if she’d be interested in painting a mural on a 5,500 square-foot retaining wall adjacent to the property. It was an exciting offer, but Crawford knew she couldn’t go it alone.

“My first response was, ‘I don’t really paint many murals, but I know who does,’” said Crawford. While they’d never collaborated on a project before, Crawford invited fellow painter Hilary Siber to join her on the project.

“Hilary took the lead and followed through with applications for designs, purchasing materials and renting the necessary lift equipment,” said Crawford. 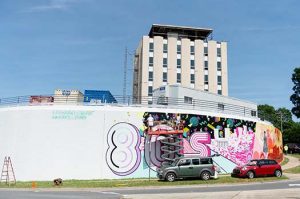 Into the 80s | CREDIT: Brooke Brown

Over the course of two years, Crawford and Siber conducted research for the mural, which is divided into decades of Charlotte history from the 1960s to the 2000s. They sought input from the Ervin family, GVest Capital, neighbors and organizations in east Charlotte.

Crawford focused on portraits to be integrated into the mural, and Siber concentrated on colors, patterns and textures to tie it all together. Both worked on logistical planning, including the need to secure approval from the Charlotte Department of Transportation.

Finally, this May, it was time to paint.

The Kindness of the Community 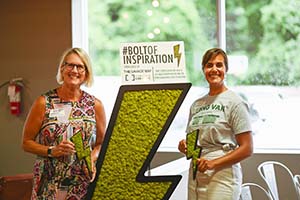 Crawford and Siber were awarded a Bolt of Inspiration for the mural at he July meeting of CreativeMornings.Charlotte | CREDIT: Dionna Bright

Over the course of six weeks, Crawford and Siber created their new mural in the shadow of the Ervin Building. (Although the building doesn’t actually cast a shadow over the mural.) Often working on ladders in direct sunlight, the artists were amazed by the support of the local creative community and passersby.

“We were overwhelmed by the daily encouragement of drivers and pedestrians from the neighborhood, thanking us for filling the huge concrete wall with beauty,” said Siber.

Friends dropped by with boba teas, and east Charlotte residents offered them Gatorades and cold drinks as temperatures reached 100 degrees.

“One talented musician friend even serenaded us with a live guitar performance of ‘Carolina in My Mind,” said Crawford. “Photographers Brooke Brown and Matt Henesy cheered us on and captured our process. And, our fellow muralists Sharon Dowell and Osiris Rain stopped to encourage us, as well.”

History is Found in The Details 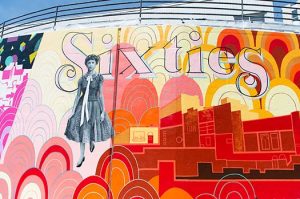 The mural contains images of notable Charlotteans, as well as colors and patterns that have significant meaning in Queen City history. Here are a few to note: 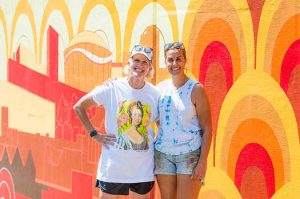 Now that the mural is complete, Crawford and Siber look back on their work with pride, but also contemplate the role local creatives fill as historians.

“Charlotte’s creatives are daily preserving and promoting Charlotte’s history through their own making whether they write, paint, dance, drum, sculpt or photograph,” said Siber. “Their voices carry their own story as well as those who informed them from the past.” 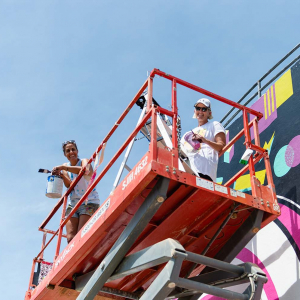 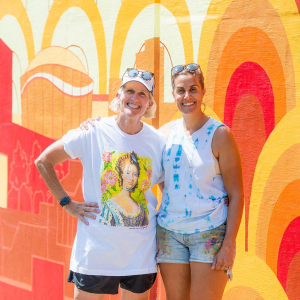 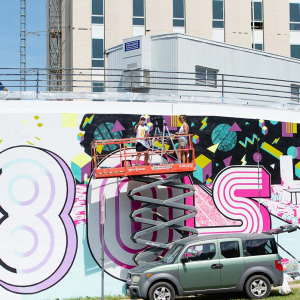 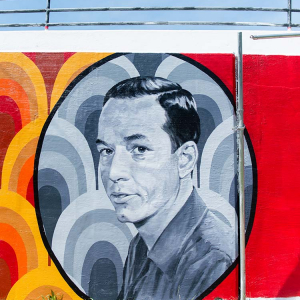 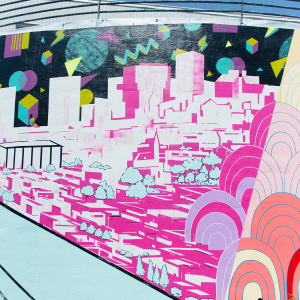 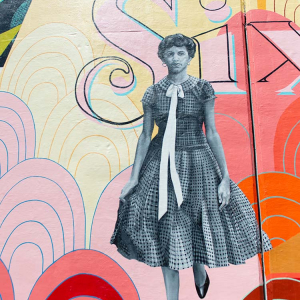 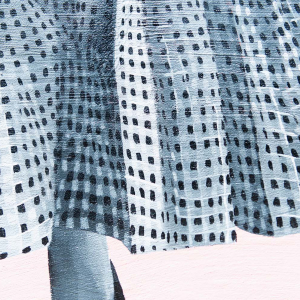 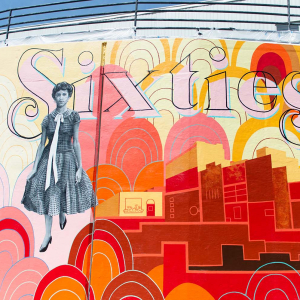 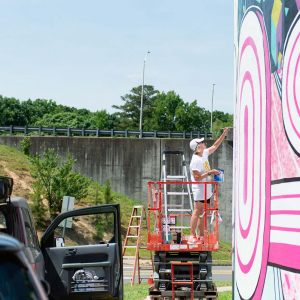 Watch a Video of the Mural’s Creation