WHAT THE CONSTITUTION MEANS TO ME … AND CASSIE BECK … AND YOU!

True and embarrassing confession: I haven’t thought much about the Constitution since I was in my 11th grade U.S. history class in 198 … ummm … never mind. And when the play, What the Constitution Means to Me premiered on Broadway in 2019, my reaction was, “Well, that sounds  … awful. Who wants to sit through a civics lesson disguised as a play?”

Then I spoke with Cassie Beck (Amazon Prime’s I Know What You Did Last Summer and Broadway’s The Humans) who has the lead role in the national tour.

Now, I am a convert.

Luckily, now that I’m excited, I don’t have to wait to see the show. It’s coming to Knight Theater at Levine Center for the Arts Feb. 15 to 20. Tickets are available.

After you read my conversation below with the smart, funny, articulate and delightful Cassie Beck, you’ll want to know more about what the Constitution means to her, too.(Although it pained me to cut anything from our fascinating, hour-long conversation, the following has been edited for clarity and length. From here, I will be referred to as The Biscuit.) 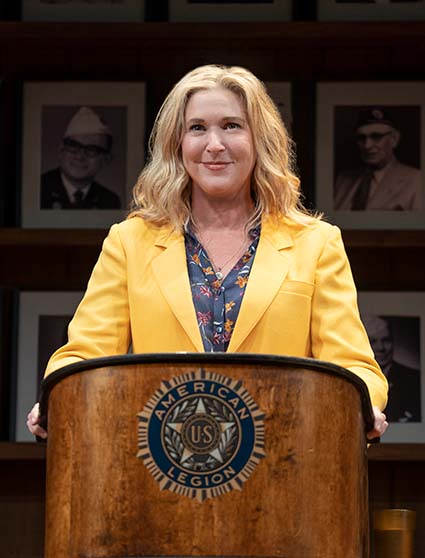 The Biscuit: Let’s say someone thinks What the Constitution Means to Me will resemble history class. What would make them want to see it?

Cassie Beck: Heidi Schreck wrote and performed this play because when she was 15, she really did travel the country giving speeches on the Constitution for prize money. This was her jam. This is what she loved. And the whole premise of the play is looking back at the speech she prepared for those contests. [Schreck won enough money participating in Constitutional debates to pay her entire college tuition.]

What I think is enjoyable for people who aren’t necessarily Constitution buffs or historians is watching a 15-year-old girl draw a personal connection to the Constitution, and then watching a 45-year-old woman do the same thing.

It’s a personal growth story as much as anything. And it’s really an invitation for people to try on a personal connection to the Constitution and, I think, a rallying cry. Interpretation of the Constitution matters, and we have a civic responsibility to take it very personally — like any important relationship in your life.

The Biscuit:  It’s very funny! I was surprised by how funny parts of it are.

CB: It is. I think people are surprised and a little relieved. It’s not medicinal. It’s a great night out at the theater.

The Biscuit: At the beginning of the play, Schreck says she needs to “establish a genuine and spontaneous connection with the audience.”

And, in a different interview, you said, “The scene partner is the audience.” Do you have to work at making that connection, or does it usually happen pretty organically?

CB: So far, I’ve not had to work at all. I think being a post-pandemic show (“post” being arguable), it’s got so much electricity and energy. My experience has been that I walk out on the stage, and people just explode into applause and cheering.

I think they’re just so thrilled to be there. The first thing I say is, “It is so good to see you,” directly to them in full light, and they respond. So there’s an immediate exchange that just adds to the intimacy.

The Biscuit:  Did the pandemic make a difference in the way audiences react to the show?

CB: Any time there’s an exchange between performer and audience, it’s a special thing, post-pandemic or not. I’ve been in [fictionalized] plays where you start the story and you’re certainly aware of the audience, but you’re not in a direct relationship with them in the same kind of way.

But this play, for sure; it’s a cheery, funny, very capable character who’s coming out and who promises to be honest. I think audiences, maybe subconsciously, and people in general, really respond to truth and honesty. 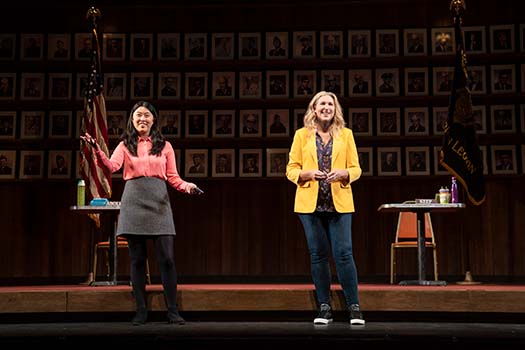 We’re not tricking you and we’re not lying, and I do think people pick up on that energy. There’s something maybe a little more trusting between an audience and the character of Heidi because we know it’s her actual story. So there’s a lot of grace that comes from an audience around the idea that this is true.

The Biscuit:  It seems entirely different from a fictional play where I’m allowing myself to be transported to whatever that world is, and I’m not thinking about anything relative to my own life. But, with WCMM, the audience is transported in the way that theater tends to do, but—not entirely. We’re characters in this too because this applies to all of us.

CB: Yeah. I’m being honest, and the character is being honest and using herself as a kind of guidepost for how to look at the Constitution and relate your own life to it. You’re learning from her. She’s doing it in real time in front of you. You are challenged and invited to do it yourself, and you kind of can’t help it.

It’s not a fantasy piece. I keep using the word “invitation” because that really is how it feels. It doesn’t feel like a dry civics lesson on the Constitution. It does not feel like a shaming or a blame game. It really feels like a personal investigation and a questioning. And anybody who’s engaged in the story and is sitting there will find themselves doing that.

The Biscuit:  Heidi says more than once that she has nothing against men. And while there’s no denying that the Constitution heavily favors white men, the play is not an attack on them. This is the system under which they’ve grown up and all they’ve ever known.

But it very unfairly benefits them and gives them, and always has, advantages that have not been given to everyone else.

CB: Right. I think there are life-and-death stakes in the fight for true equality. It’s not a guarantee. Part of what she’s pointing out is that there’s still a fight going on. It is not truly equal. I’ve said it before, and I’ll say it again: The thing that keeps popping up to me as I’m performing is that interpretation matters. 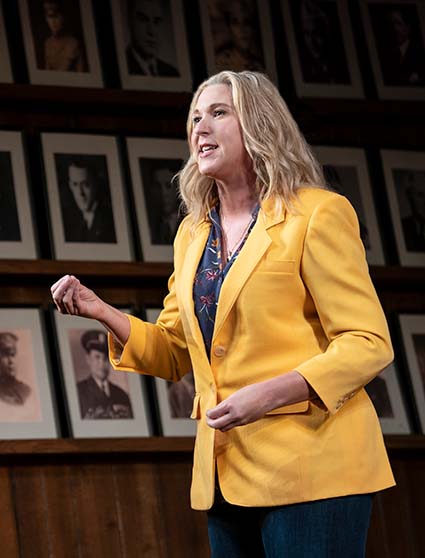 This is a living document. We think of it as under glass, etched in stone, this untouchable thing. And the truth is that living, breathing human beings are interpreting it on a regular basis. We have a say in that. Part of the challenge is let’s know the Constitution ourselves, so that we can vote for the people who interpret it the way we believe will get us closer to true equality.

Everybody in the audience gets a pocket Constitution as a souvenir and, again, as a kind of prompt and a little nudge to go ahead and take a look for yourself. It’s ours. And that was the big lesson I learned. I actually have a right and a duty . . .

The Biscuit: And a stake …

CB: And a stake, yes exactly, to personalize this. Because it is me. “We the People” is actually us! It’s not Alexander Hamilton, 10 generations back.

It is us currently, right now, in this moment. It sort of modernizes or contemporizes the Constitution.

The Biscuit:  It makes it relevant and puts it in plainer language. I think a lot of people are put off by the language. But when you make it understandable, then you see how it’s relevant.

CB: This is why people contemporize the production values of Shakespeare. They put them in a Starbucks and not in a castle. So you can start to relate it a little more to your contemporary life. I think that’s always been true for the Constitution, and for a lot of us, we’ve been able to kind of sit back a little in our privilege around it, and so we think of it as not relevant or not ours. And there’s a lot to learn and a lot to experience in a very funny, entertaining way through the show.

What Heidi does so well is she takes these bigger concepts, bigger human societal complexities, and she filters them through her own life and her own self. And what comes out in her art is a very entertaining, honest and raw interpretation of all of that, distilled through her. She simplifies it and draws connections that we would not have made ourselves.

The Biscuit:  Anything I didn’t touch on that you’d like for our readers to know?

CB: My hope for the audience is that . . . we’re examining systems that are meant to protect us, and I hope people feel that we’re a jolt of energy at a really tired time.People are tired and COVID is incredibly hard so a sense of connection, a galvanizing force, makes people feel acknowledged and seen.

I really hope it empowers female-identifying folks to speak up and to feel some power and also just to know that we’re there with you. Part of what’s great about going across the fourth wall is it feels like we’re making a real connection.

And as hard as the show can be sometimes to perform or to go through myself—there is a lot of emotion and it’s a little bit of a marathon—I always think there is at least one person in this audience who needs this story to unlock something for themselves.

CB: Absolutely. I think that’s what the miracle of the play is. It’s making it relational, making it individualized, making it one-on-one. We have a personal relationship, and just like any important relationship, it takes work. If it’s important to you, you work on it.

What could be more important than life, liberty and the pursuit of happiness?

Find Out What the Constitution Means to You!

What the Constitution Means to Me is on from Feb. 15-20 at Knight Theater. The production is 90 minutes with no intermission. Saturday and Sunday offer matinee and evening shows. Tickets start at $20. Secure yours here. 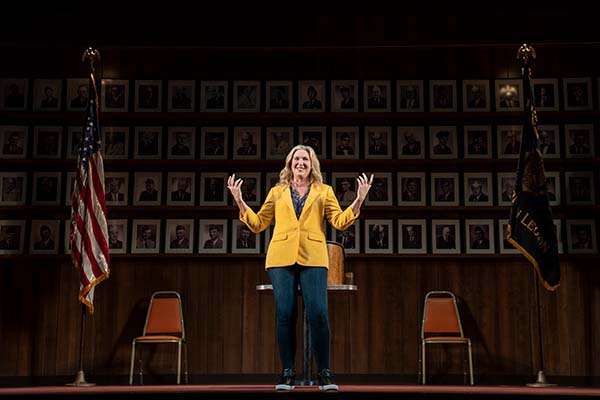 Cassie Beck in the North American Tour of “What the Constitution Means to Me?” – PHOTO CREDIT: Joan Marcus

This story was sponsored by Blumenthal Performing Arts.
A portion of this sponsorship supports HUG Micro-Grants available to local creatives.