From Gamer to Developer to … the Sky’s the Limit

Say that to a group of teens – probably looking down at their phones – and you’re likely to be met with a shrug, at best. Disdain is more likely. They won’t even look up to say, “Nah. We’re good.”

But try asking: “Hey! Wanna learn how to make a game just like the one you’re playing?” You might get their attention.

That’s the premise behind the Youth Technology Apprenticeship Camps (YTAC, pronounced “Why-Tack”) started by Carolina Fintech Hub, Charlotte Executive Leadership Council and other community and corporate partners in 2020. The effort – which was entirely remote due to COVID-19 – has succeeded well beyond initial goals 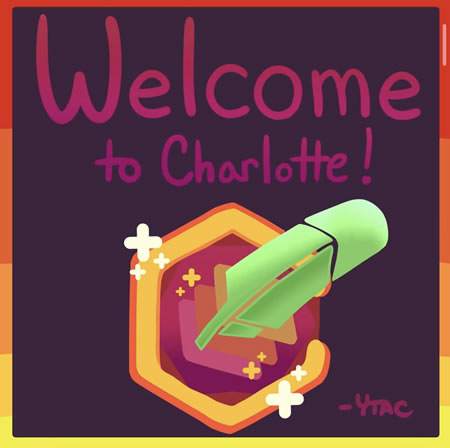 “People are trying to figure out how to get kids interested in STEM learning, coding and entrepreneurship,” said Tariq Bokhari, executive director of Carolina Fintech Hub and Charlotte City Councilman representing District 6.

Bokhari thinks most adults approach attracting youth to tech careers all wrong – starting with calling it STEM (science, technology, engineering, math) learning. That’s just another case of adults and educators trying to sound cool when they should be listening instead. It’s a construct … and kids can sniff it out.

“We meet them where they are – playing video games, hanging out on Discord, sharing bad experiences with each other on Twitch,” he continued. “We take video gaming and esports very seriously. We tell them they can invent things if they know how to code. We say: Technology makes these things you love possible. And you could build your own version of that.”

One Month Changed the Future

YTAC began in 2020 as a month-long camp for Charlotte-Mecklenburg Schools (CMS) high school seniors not going to college. The idea was to teach them marketable technology skills that would allow them to get good, high-paying jobs right out of high school.

The 20 students in the first cohort got paid $10 an hour to participate. This year’s program had to expand to meet demand. For one thing, YTAC, now a three-week program, is open to all high school students – not just seniors. It’s also open to students who have always envisioned college as part of their life plan.

Cristian Ponce, 18, is one of those students. Bokhari called him “one of our standouts from the first cohort.” He’s headed to California Institute of Technology (Caltech) later this year to study science and engineering. But before he goes, he’s got an impressive job. He’s the director of YTAC and manages a staff of 10.

“It’s been amazing,” he said. And he’s not talking about his journey. 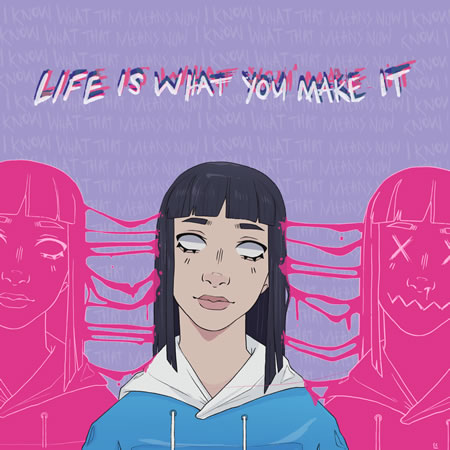 “I know not all kids are immediately enthusiastic about things like programming, math and science. A lot of kids come in and say, ‘I can’t do that.’ They feel like they can’t succeed. But by using something they’re already comfortable with and love, like esports, we can create a sense of familiarity and comfort. They know they can succeed.”

They already love Rocket League, Fortnite and Call of Duty (for the uninitiated, those are wildly popular video games). So, why not use that passion as a gateway to a well-paying job?

There were 275 students in the third and most recent cohort. (See the final competition here.) Thanks to online classes, they weren’t all from Charlotte. Still in its infancy, the program has expanded to include students from Wilmington, N.C.; Detroit; Philadelphia; Kentucky; California; Florida; New York; Arizona; and Canada. There’s a particular focus on reaching students at Title I schools.

Applications are now being accepted for the fourth cohort, which will take place in early June in Charlotte and Wilmington in a hybrid in-person/remote format. The cohort will get to use PCs capable of gaming and game development. In addition, Bokhari’s team is in the final phases of launching the first-ever physical campus for YTAC on Beatties Ford Rd. as well as one in Wilmington. 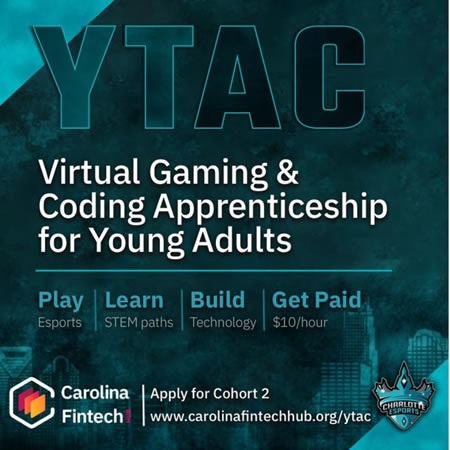 Fully 70% of program participants identify as people of color. About 30% are females. That’s something Ponce hopes to improve upon.

“The program has evolved,” Bokhari explained. “There are pools of money now awarded to students at the end, but they’re more incentive-based.” Those who participate, have good attendance, learn to code and enter certain coding challenges get a share of the spoils.

Fintech staff, outside instructors and a variety of professionals and inspirational speakers spend time with students in the program – all of whom participate for free thanks to the support of corporate partners.

Students get to compete (another aspect of YTAC’s programming they love) in a game-making contest. Carolina Fintech Hub partnered with Cary game maker Epic Games – creator of Fortnight – to use the “Unreal Engine,” a free, public platform for game creation.

“They make their own and have a really big sense of accomplishment and rightfully so, coming in knowing nothing and putting together a game through what’s called a blueprint system,” Ponce said. “They don’t have to use any actual line-by-line code; it’s more of a building-block system.”

A Supportive Community Anyone Can Join

When he joined YTAC’s first cohort, Ponce didn’t know anything about game development. “It was all new to me, and it was a little intimidating,” he said. “I was like, how are you gonna create a whole game in three weeks? It’s a tall order, but the program is staffed to support it.”

Support is one of the program’s pillars. 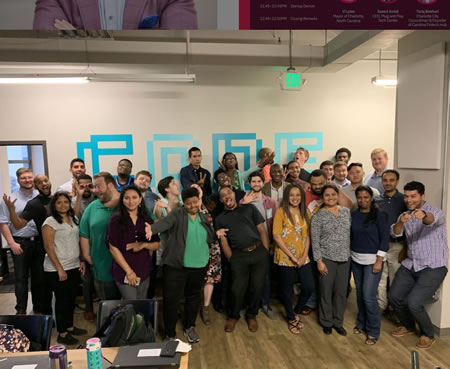 “It’s a very, very supportive community,” Ponce said. “I think a lot of students in high school don’t have that available to them. And without that, they’re not able to achieve on the same level.”

While STEM is the focus, it’s not all science, all the time. “It’s like an open school where anybody can come in and pursue what they’re interested in,” Ponce said. “We have clubs like digital marketing and content creation that involve other skills that aren’t strictly related to STEM – like photo editing and video editing. Both Tariq and I acknowledge that a STEM track isn’t the only path to upward mobility.”

“In addition, we put a heavy emphasis on supporting the community aspect of the program. We have a Gay/Straight Alliance and a Females in Technology club, just to make sure we’re catering to everybody in the program.”

YTAC isn’t the only program Carolina Fintech Hub has developed to create a tech talent pipeline. The 24-week WIN (Workforce Investment Network) program identifies local talent with a particular focus on people who didn’t have the opportunity to go to college.

Those selected through a rigorous application process are awarded paid professional development that includes Java programming and 12 weeks of on-the-job training. Program graduates are placed in a job at one of the program’s partners – Ally, Bank of America, Coca-Cola, Wells Fargo, Truist, Lowe’s, among others. Starting annual salary: $55,000.

Yes – there are recent high school graduates making that kind of money.

“As a country, we’ve approached science, math and technology like it’s nerdy, and it’s not,” Bokhari said. “It’s what will dominate the future.”

Want to be part of the fourth cohort in June? Apply here.