The Fourth may have started July off with a bang, but many more creative fireworks are about to go off in the Queen City.

In this batch of The Biscuit, we’re looking at 12 events and activities through the end of July that are hotter than Charlotte in August. Oh yeah … August is coming. Better enjoy outdoor events while you can. 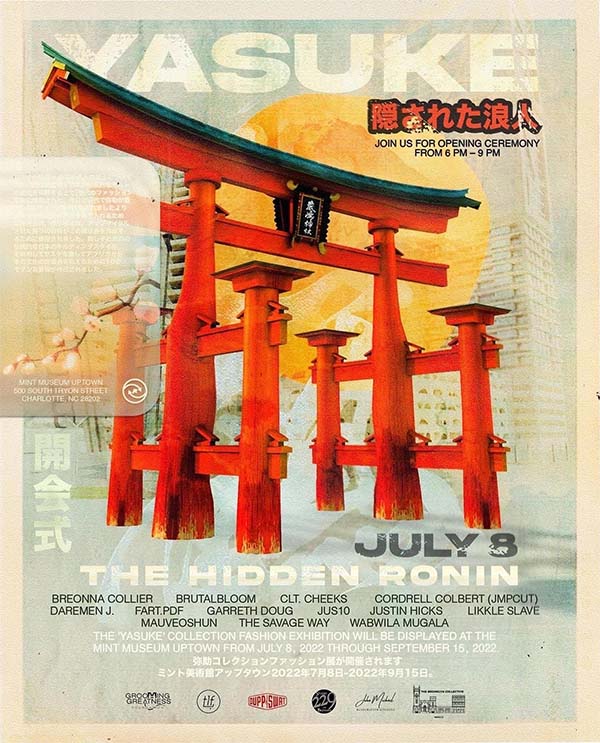 YASUKE: THE HIDDEN RONIN BY R.O.O.L.E.

What’s the deal?
Charlotte clothing designer, Gordon Holliday, has been making a name for himself over the last few years. His particular brand of creativity and ingenuity blends quilting, sewing and sustainability. He established the brand R.O.O.L.E. (RULE OVER OUR LIFE EVERYDAY) in part by collaborating with the creatives around him – musicians, designers, photographers and more.

The exhibition helps illuminate the history of the first Black samurai. Using donated, upcycled and reworked materials, Holliday and his team created 10 modern kimonos meant to honor the intersection of African and Japanese cultures.

Why are we excited?
Charlotteans are just waking up to the incredible depth of fashion talent at work here. But, now that the word is out, it’s spreading quickly. When the Mint Uptown played host to the QC GarMINT District fashion show earlier this year, more than 700 people showed out – on a Wednesday – to celebrate the five designers in the show.

We appreciate that R.O.O.L.E. chose to partner with the Grooming Greatness Foundation on this exhibition. The nonprofit works with local youth to instill in them an entrepreneurial mindset and an understanding of the application of the arts in their futures. Kids love fashion. Using that to show them that creativity is a pathway to a sustainable career is just our style.

In fact, we were so taken by this event that, with the help of The LendingTree Foundation, we awarded them a $1,000 Bear HUG to assist with production costs. Learn more about HUG micro-grants here.

PRIDE month came to an official close at the end of June, but the celebration of our creative LGBTQ+ community can’t be contained in just 30 days. That’s why we’re excited that The Mint Museum location on Randolph Rd. is playing host to a new series by Los Angeles-based artist Diedrick Brackens, an artist known for using textiles to share Black and queer histories. 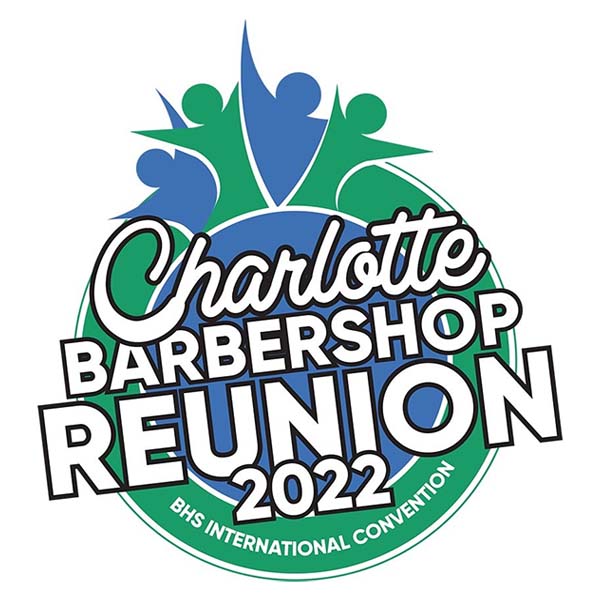 What’s the deal?
The Barbershop Harmony Society is holding its annual convention in Charlotte. For the uninitiated, barbershop music is a cappella singing in four parts consisting of a lead, who sings the melody, and a tenor, baritone, and bass who harmonize closely with the lead.

The multi-day event includes classes, contests, an outdoor “Megasing,” and a special champions show tonight at Belk Theater. For an idea of what it’s all about, see the excellent 2009 documentary American Harmony. (You can stream it for free via the Charlotte-Mecklenburg Library.)

Why are we excited?
Since the BHS began holding conventions in 1939, this is the first time it’s been held in North Carolina (and only the 11th time in a Southeastern city). It will bring a huge influx of talent and fun to our city. For barbershop music fans, it’s something to sing about! 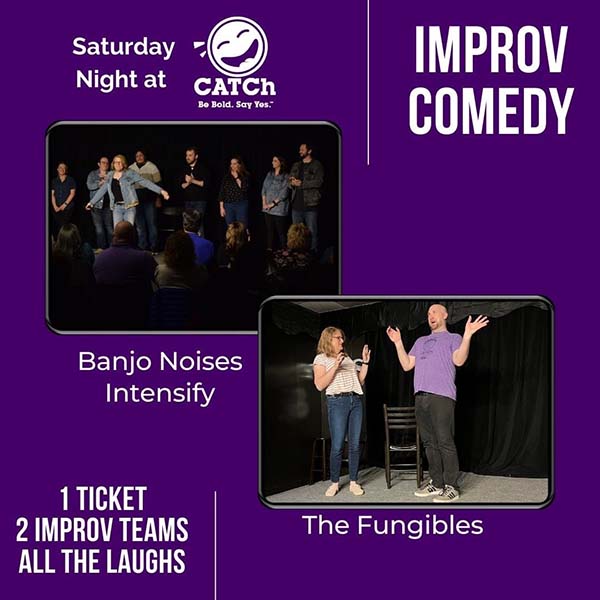 What’s the deal?
CATCh co-founders Abigail Head and Kevin Shimko (“The Fungibles”) know each other well – they formed this company in 2015. But they play total strangers in this two-person improv production Strangers on a ______.

“The Fungibles” start each show as two characters who don’t know each other. This defies the rule of improv which states an established relationship is crucial to a good scene. However, by the end of the show – after taking audience suggestions – these two “strangers” discover they have more in common than they thought.

While The Fungibles portray just two characters, Banjo Noises play many characters. Again, it’s all based on audience suggestions.

Why are we excited?
Who couldn’t use a laugh these days? And improv is always fun to watch. You never know where it will lead. Neither do the actors. 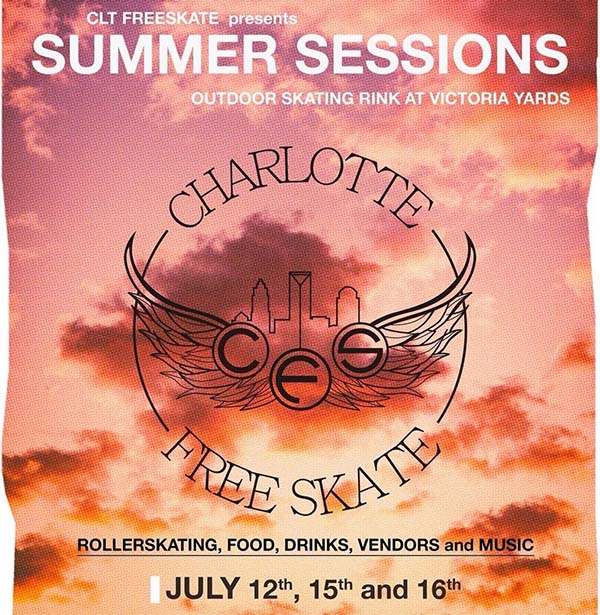 What’s the deal?
This first outdoor skating event started last month, and the fun continues through September (with select dates each month). While there’ll definitely be skating, it’s not all about the wheels. In true Charlotte fashion, there’ll be food trucks, drinks, music, vendors and entertainment. For visitors who don’t want to skate but want to have a good time, admission is free.

Why are we excited?
Who doesn’t love an outdoor event with themed days? There’s Latin Day Tuesday, Free Yourself Friday and Jam Skate Saturday. Plus, this event is fun for all ages (18 and older from 8-11 p.m.) The CLT FREESKATE team offers training sessions, too. 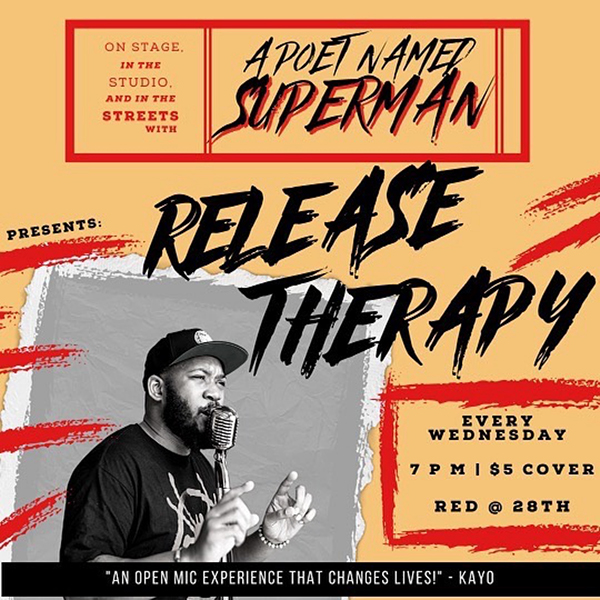 What’s the deal?
Every Wednesday night, award-winning creative, A Poet Named Superman, leads a writers workshop (6:30 p.m.) and an open mic night (8:30 p.m.) for established and up-and-coming Queen City slam poets and spoken word artists. While no two “Release Therapy” nights are the same, they are usually punctuated by live musicians and DJs. A Poet Named Superman himself says to expect a “dope night of art and good vibes!”

Why are we excited?
A Poet Named Superman brought the house down at a virtual gathering of CreativeMornings/Charlotte and wow’d our friends at QC Life. Much like we have with local fashion design, Charlotte has slept too long on our status as a powerhouse city for spoken word and slam poetry. Bluz Rogers captained SlamCharlotte to a national slam championship in 2018 and his teammate, Jay Ward, Charlotte’s inaugural Poet Laureate, won an individual slam championship in 2019. It’s time for us to claim our crown and embrace our poetic prowess.

Artists who wish to perform on a Wednesday night should DM @apoetnamedsuperman or @mynamekayo to secure time on the mic. 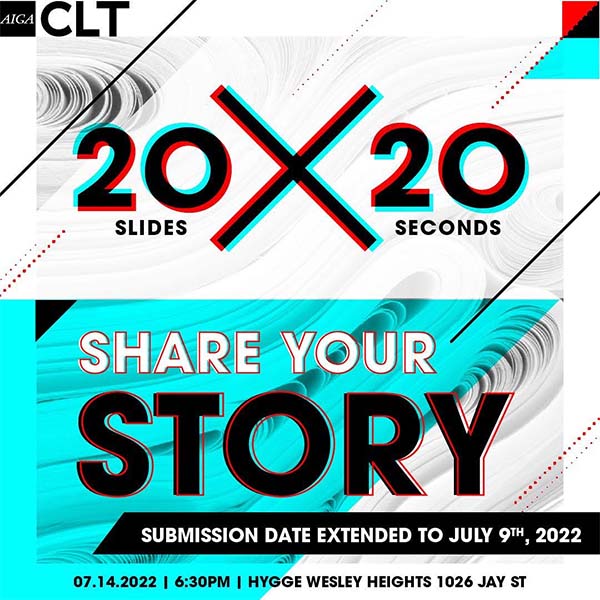 What’s the deal?
For those of you missing the rapid-fire storytelling of PechaKucha, the Charlotte chapter of the American Institute of Graphic Arts (AIGA) is here for you. Their “Share Your Story” night on July 14 will feature local creatives telling a tale in less than seven 7 minutes. Each participant will prepare and show a deck of 20 images. They have no more than 20 seconds to share and explain each slide. It’s like a night of speed dating creative stories.

Why are we excited?
If you’ve read The Biscuit for any length of time, you know that we are obsessed with collecting and sharing the life stories of local creatives. The 20 x 20-style of storytelling can be absolutely intoxicating, and we’re excited that AIGA has brought the format back to the Queen City. 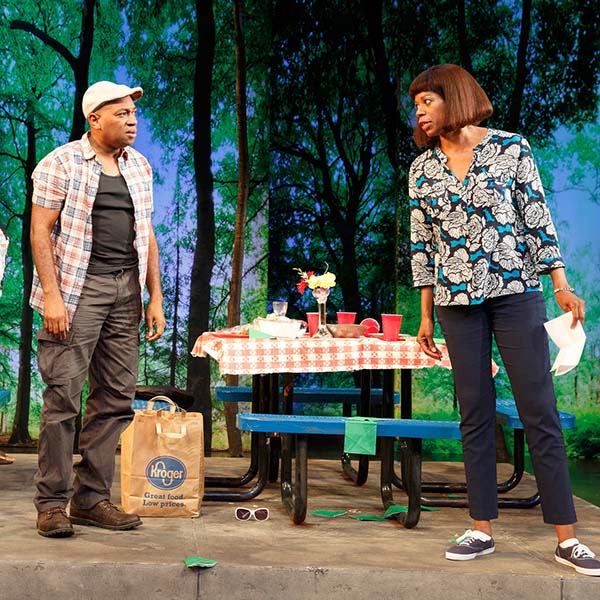 What’s the deal?
Davidson College has a new professional theater company that combines the talents of the theater departments at Davidson College and N.C. A&T. Common Thread Theatre Collective (CTTC) is committed to telling inclusive stories and hiring (and paying!) artists of color.

Why are we excited?
The second play in CTTC’s inaugural summer season tells the story of two families — one black and one white — who come together for a cookout. The real reason for the gathering is to stage an intervention for one sibling with a bad drug habit. Similar scenes contrast how each family handles a fraught situation. Robert O’Hara, an artist of color, wrote “Barbecue.” It should provoke lots of thought and discussion. 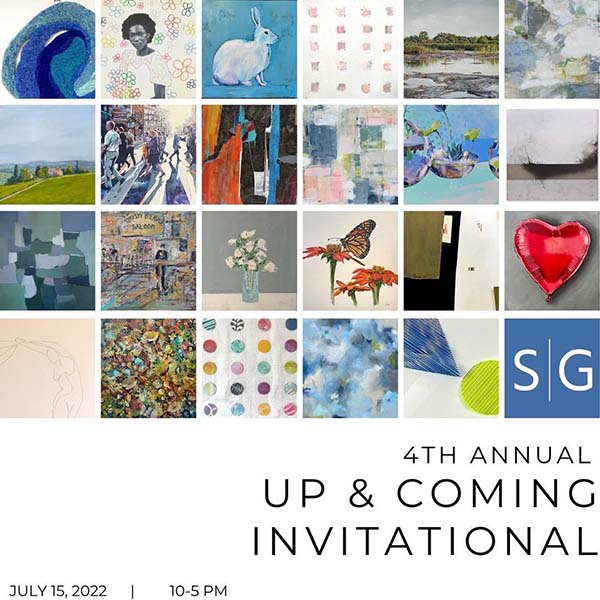 What’s the deal?
Twenty-three local visual artists will be on display at Shain Gallery on Selwyn Ave. during their fourth annual “Up & Coming Invitational.” Participating artists include some of our favorites – like Cat Babbie and Veda Saravanan – and many creatives we can’t wait to meet. Work on display ranges from paintings to fiber art and two-dimensional sculpture.

Why are we excited?
If recent installations like LOCAL/STREET 2022 and It Takes a Village have taught us anything, it’s that there are simply not enough venues and opportunities to contain the burgeoning creative talent in Charlotte. And, the fact that the team at Shain Gallery has taken on the added mission of seeking out and shining a light on budding artists is especially alluring. 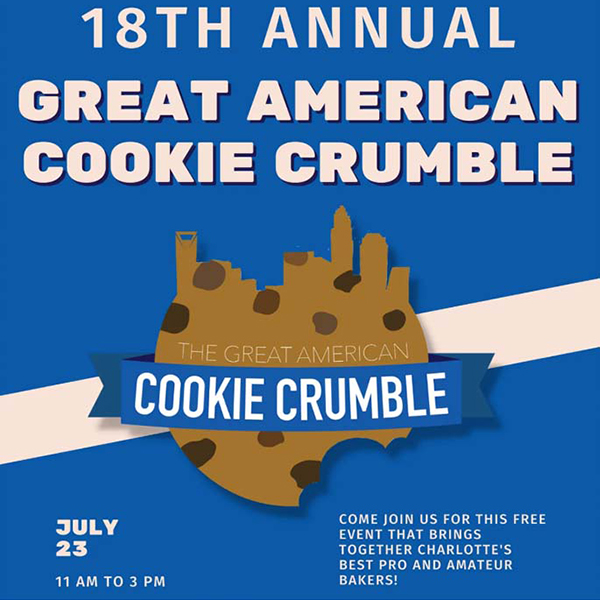 What’s the deal?
After a short, pandemic-induced break, Charlotte’s biggest cookie competition has fired the ovens back up again at the new Victoria Yards across the street from the Market at 7th Street. Both professional and amateur bakers will compete for the affection and admiration of the contest judges and the general public.

That’s right! You’re invited to bring your tastebuds to the table and vote for the best of the batch. This family-friendly event will also feature games, crafts, balloon art, soap bubbles and a very merry guest on vacation from the North Pole.  If you’re interested in bringing your biscuits (ahem! cookies) to the battle, sign up here.

Why are we excited?
Ummm … didja’ hear about the cookies? 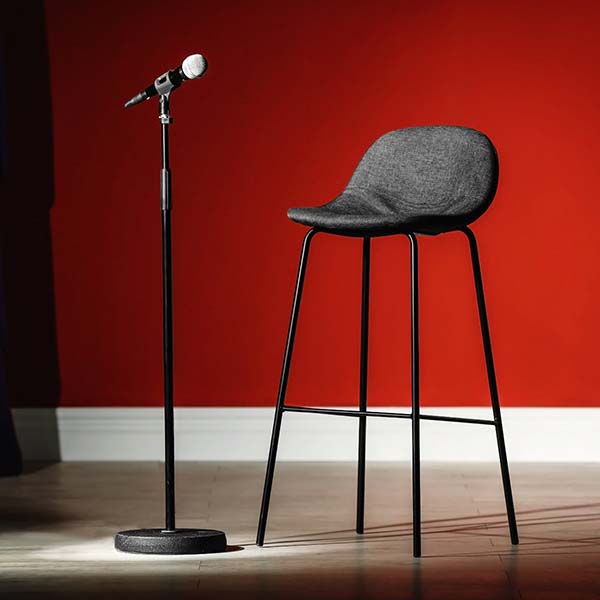 What’s the Deal?
Charlotte Comedy Theater’s “Intro to Standup Comedy” class will explore the process of creating and performing a standup comedy set. Classes run for six weeks and topics will include writing jokes, performance techniques, Do’s & Don’ts, and more. Your professor will be comedian Don Garrett, a featured comic on Season 9 of DryBar Comedy.

Why are we excited?
The last few years have been … difficult. Which has also given us all an abundance of new material. And hey, if we can’t laugh about it, we’ll cry. So why not learn how to craft a tight comedic set, get up on a stage and bring the house down? We could all use a good laugh these days. 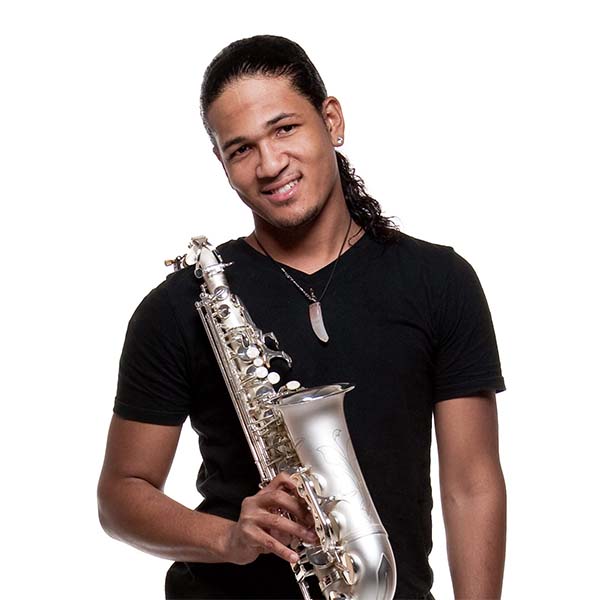 What’s the Deal?
Adrian Crutchfield is known around the world for his neo-soul sound – creating music in a variety of genres such as jazz, R&B, pop, funk, soul, hip hop and fusion. Crutchfield has taken the world by storm in recent years as the last sax player to perform and record with Prince (his final three albums). He’s also toured domestically and internationally with acts such as Lionel Richie, Bette Midler and Cee Lo Green — all the while writing and building his own material.

Why are we excited?
We’ve loved getting to know Adrian over the years (Matt Olin even appeared on WBTV with him last year), because this man is truly living out his dream. So why wouldn’t we want to see this Northwest School of the Arts alum unleash a brand new album of music at one of the Queen City’s best music venues? 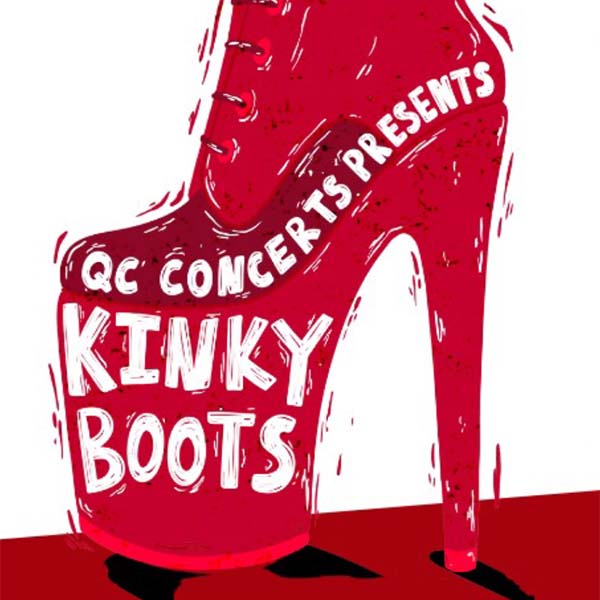 What’s the deal?
QC, in this case, stands for “Quarantine Concerts.” The group formed in 2020 to bring live-streamed concerts to all those who were homebound. In 2021, the troupe shifted to full-length productions of plays and musicals in what they call a “concert-style setting.” In other words, there are no sets or costumes. It’s pure music.

Why are we excited?
We applaud the creativity and ingenuity of any group who took root during the worst days of COVID – and is still at it. QC’s second season is an ambitious one. It opens with Kinky Boots, followed by Titanic in October, Cruel Intentions in February 2023 and – wow! – Angels in America next May.