Don’t let anyone tell you that Charlotte is not a film town.

Scores of movies and televisions shows been filmed here and Charlotte is also the home for a plethora of film festivals. Unfortunately, this year has really thrown all of us for a loop. While our film creatives could have just hung up their slates, they turned to collaboration and took a big batch of lemons and made lemonade.

Better yet, they took 12 lemons (in the form of 12 different film festivals) and created 1CLT Film Fest which is set to debut this weekend, July 26 and 27. And, it’s none too soon.

“Not knowing when we might be able to resume our series and reunite with the amazingly diverse community we had fostered in such a short amount of time,” says Giovanna Torres, founder of Cine Casual and one of the 1CLT organizers. “[W]e had built up such incredible momentum. All of the film screenings (at Camp North End and VisArt Video) had been sold out! Having to hit the breaks and put all the plans on hold was truly disheartening, especially because we had so much planned for our community and the people of Charlotte.”

Giovanna was facing the same challenges and heartbreaks as so many of her colleagues. And, a common challenge can create powerful alliances. The festival came together incredibly fast, fueled by passion and necessity. 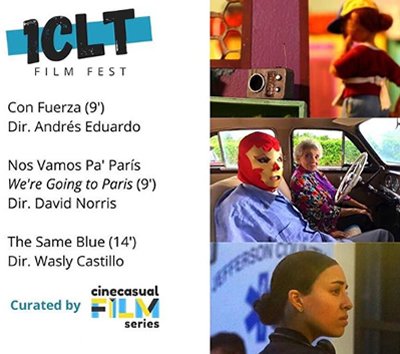 Juli Emmons of the Carolina Film Community, says, “Angel Truesdale(Charlotte Film Festival) and Tre’ McGriff (CineOdyssey Film Fest) met together and came up with a list of the various groups of film organizations in Charlotte and then worked diligently to contact them with their vision for this festival.”

“After that, it sort of took on a life of its own, with each organization lending its own special uniqueness to make this festival one of a kind in the area,” said Juli. “It did happen VERY quickly, but when there is such strong passion for the arts, as there is with this group, awesome things like this can and will take place within a small amount of time.”

Tre’ agrees. “I’m excited about the 1CLT Film Fest because all of the film groups have worked out of our normal comfort zones, in true collaboration,” he said.

With so many different festivals participating, the lineup of films scheduled to be shown over the two days is vast, offering an array of languages, cultures and viewpoints. Genres included run the gammut from shorts, traditional arthouse films and dramas, comedies and more.

The film festival may be audacious, but it’s also a powerful way to break down cultural and geographic barriers very much at work in the Queen City. That’s no easy task in the best of times, let alone under the current restrictions that prohibit large gatherings. Perhaps the digital world transcends some of those boundaries.

“When you think about how many people in the metro area represent so many cultures and experiences, it’s easy to see why they seek out those representations in film,” said Angel. “Charlotte is also a city that has struggled to keep an arthouse cinema scene alive, so a lot of us had to get creative in how we exhibit movies. Like the Charlotte Film Society and Charlotte Film Festival, joining forces is a way to innovate and transform in order to survive.”

For Now … and for the Future 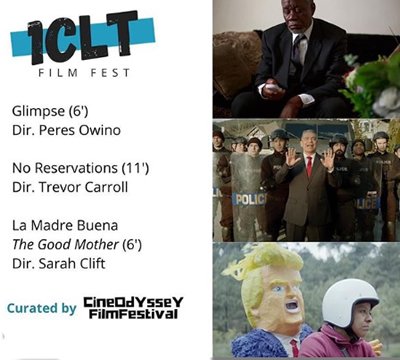 Ollie Crooms of the Carolina Film Festival is excited about the partnership established to make it all happen and sees a bright future for it, “When the concept for the 1CLT Film Fest was first explained to me, I was immediately hooked and knew that I wanted to be a part of this ambitious and unifying vision for years to come. Carolina Film Festival will definitely continue our partnership beyond 2020.”

Alex Pineres from Cine Casual agrees, sharing thoughts on the potential impact of this online event and the partnership established to make it happen.

“It will have a tremendous effect. More than ever, the world is full of stories waiting to be told. COVID-19-related challenges are pushing further the creativity of folks in all areas, not to mention the calls for social justice and change,” said Alex.

“I think there will also be an expansion and growing interest in documentaries, and filmmakers pushing boundaries in how those stories are told. A growing audience will appreciate the amount of work and love it takes to make films.”

Get Your Ticket to the Show(s)

(You’ll have to supply your own popcorn and Junior Mints …)