The story below is the first installment of our new series, “Ink Stories.”

Tattoos have a story. Typically, they are for the tattooed as opposed to the viewer. But sometimes, you get lucky and get insider info. So this is my gift to you, Charlotte. Cheers.

As a female bartender in Charlotte, I can tell you for a fact every single middle-aged man “really likes my ink” or “would love to know who does my work.” Well, middle-aged men of America, I’m here to make all your wildest dreams come true. If that is, your wildest dreams are knowing exactly what thought went into the tattoos that gussie-up my arms and adorn the fretful outside of my left ankle. This one’s for you. 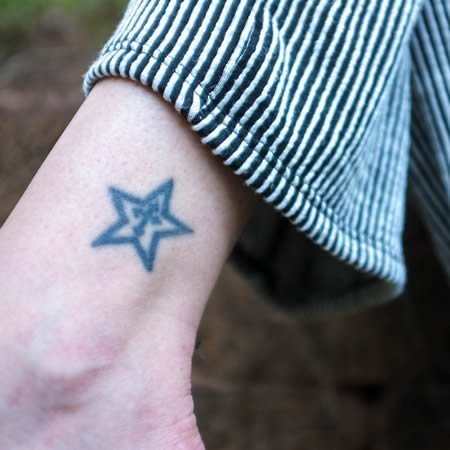 Back in 2003, I was lucky enough to turn 18 in the height of the nautical star popularity. But, I was a devout Christian and at the time. And, I was attending my inaugural year at the World’s Largest Christian Liberal Arts University (no, I’m not kidding and no, I’m not telling you what it was. Google it). Thus the natural progression was to take this trend and Biblicize it.

So, with a handful of giddy friends, taking part in an act the university condemned as “counter-cultural” (much like my nose piercing which I had to take out upon returning for my sophomore year and over which my RA’s brother broke up with me because “who gets their nose pierced?!?!?”), I headed into Caspian Tattoo on Highway 29 in Lynchburg, Virginia, with a freshly shaved ankle and a verse from Revelations ready to proclaim my knowledge of biblical obscurity forever.

I wanted a star with a cross in it (because of course, I did) to represent the seven churches. Guys, I’m not kidding. So I got a single cross to represent 7 churches. And not only that, this cross inside this star is Celtic. Because I have red hair. Am I Irish? Probably. I’ll never know because I’m avidly opposed to 23-and-me. We’ll just have to assume.

The guy, like many a tattoo artist, shoved a rendering in my face and aggressively said, “You like this?” and I had no option but to oblige. Anyway, I haven’t gotten this tattoo covered, a fact my partner Randy loves to rub in. So if you see me in a skirt or with my jeans cuffed, it’s okay to stare. I know what I got myself into and I’ve had the last 15 ½ years to live with this decision. 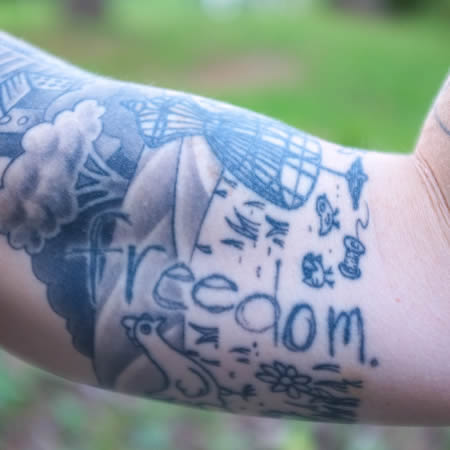 People really like this tattoo. I mean grab-my-arm-stare-at-it-intently-nod-in-agreement like this tattoo. “That looks like a book,” some may say. Or, “What city is that?” others may inquire. Others even interpret it for me, telling me that they think I’m just staring at the sun, leaving the cruel world behind. The actual story behind this one is really pretty good, so grab your hankies or shirttails or whatever you need to wipe your tears while you read in public.

It was a Friday night and I’d written out the word “Freedom” on a piece of paper and directed the fine gentleman at a (now-closed) tattoo shop on Central Avenue to adorn me with this hand-written font, proclaiming that I “didn’t want it to look pretty.” None of this flowy script nonsense. Freedom is raw! Let’s make it raw!

So, with Bloodhound Gang playing on Pandora and the tattoo artists discussing the “music genome project,” the word “freedom” was etched in such a place that when I’m in Warrior One pose, yoga instructors would comment during class— “Yes! Freedom!”

For years, I had just this tattoo hiding on the inside of my left bicep, sneaking glances at fellow yogis. A portion of the word— “dom”—hanging out of my short-sleeved t-shirts.

Adding a New Edition to the Front Yard

Before my son was born, and I was the proud mother of a sole daughter, my obsession with vintage children’s books was growing and this involved me snatching every 1970s colorful encyclopedia set I could find from the shelves at Value Village. (If you’re looking for them, good luck because I bought them all.) I found this beautiful drawing of a girl and a boy under a tree looking up. I cut it out meticulously and pinned it to a cork board (this was the pre-Pinterest days, y’all, so it was an actual pinboard) and eyed it for years. 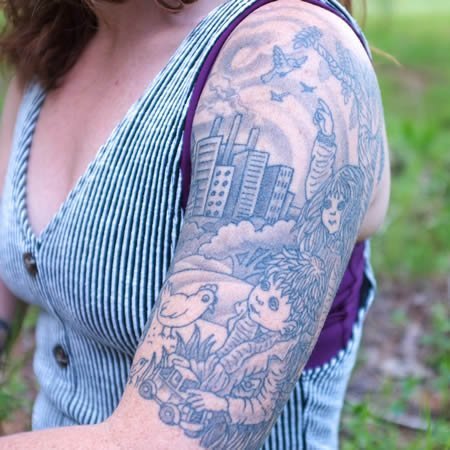 I later added in the boy and girl, which had been my dream all along, about a month after my children’s father and I split up, complete with them pointing up at birds, signifying change. I added a book in the girl’s hand and a truck in the boy’s, honoring both of my children in the deepest depths of childhood undergoing significant life change.

The city surrounding it comes from Arnold Lobel’s significantly underrated book, “Small Pig,” in which a pig is angry that a farmer’s wife wants to keep his pigsty clean (because … gender roles). He runs away to the city where he gets stuck in cement and the farmer and his wife rescue him and vow never to clean his pigsty again. This was the first book my daughter ever read cover-to-cover. It was also the first book in which my son could pick things out, so I spent hours asking “Where is the horse? You’re right! There it is!” and now this book is on my arm forever.

The Dirty Front Yard comes into play because I never went in for my last session to get the bottom third shaded in. Let me also address some frequent questions:

This tattoo is the result of many years, many sessions, many life changes. The majority of this tattoo was crafted by Travis Lakeman at FU’s, where we took mimosa breaks and I read books on Christianity. 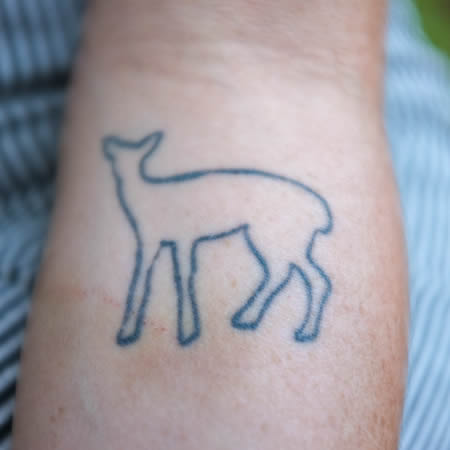 Apparently, at least based on what I’m telling myself, when your husband leaves, you get to have what is called a “Britney Year,” where you go insane for exactly 365 days until your life calms back down. The best way to commemorate this is through bad decisions … and good tattoos.

For my 27th birthday, I went with a group of people (who are no longer my friends) to a cabin getaway. Just me, eight other people, and roughly 72 bottles of beer.

As the night went on, my life crumbling around me, I woke up the next morning, barely cognizant. I called my best friend from college and demanded she rescue me. And, just like on my 21st birthday, we got matching tattoos. As opposed to the cute little hearts on our left wrists reminding us to care for our hearts, our health and others, directives we often overlooked, we got the outline of deer. Mine is just below my left elbow while hers is on the inner right bicep. So when we hook arms, they hug.

Why deer? That’s right. Because we find one another en-deer-ing.

Order Up Another Serving of Liz Logan

Charlottean Liz Logan is a freelance writer, mother, yoga instructor, vintage shop owner and events and catering manager for Not Just Coffee. Whew! If you want to try to keep up with her, follow Liz on Instagram.