When 50 Poets Walked Into a Bojangles 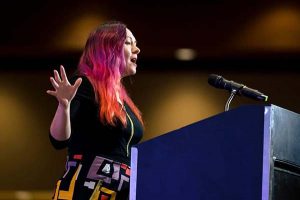 Picture this: It’s a cold January day. You’ve had a hard day at the job. Finally, your lunch break hits. You know exactly what you want for lunch – one of those lip-smacking, buttery, Cajun filet biscuits. So you get in your car and head right on over to the nearest Bojangles.

Walking in, you see that there are only two other people in the whole joint. You’re glad. You can eat in peace.

All of a sudden, the door bursts open.

Hordes of people try to squeeze their way into the fast food restaurant. Ten of them are at the counter trying to order at once. Fifteen are claiming seats and trying to take their comrades’ orders. The rest are trying to file in and find a place to sit.

It’s utter chaos until a man with a booming voice yells, “I’m getting coffee and biscuits for everyone! Naw, don’t argue with me.”

I know what I thought. I was there. 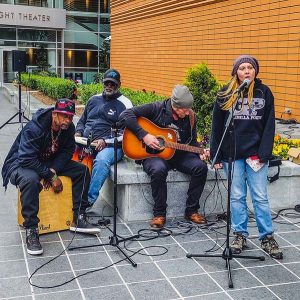 That’s when I noticed the man with the confused expression. He was just trying to enjoy his lunch. I was one of many poets there that day – Jan. 6, 2018 – at the Bojangles at  3129 Monroe Rd.

The guy with the booming voice was poet Ed Mabrey, and he did, in fact, buy us all coffee and biscuits as we proceeded to take over the Bojangles for the next two hours.

That said, the question remains: What were that many poets doing at a Bojangles?

We were having a meeting – a serious one about the future of Charlotte’s poetry scene.

Even though Charlotte has always been a hot spot for poetry and some heavy hitters have come from this city, it hasn’t always been supportive or as organized as it is today. One of the things I love most about the Charlotte poetry community is how supportive it is now.

When poets come here from out of town, they’re always amazed at how we root for each other (even in slam competitions) and try to connect each other with opportunities and resources.

Even if a poet doesn’t necessarily rock with another poet, that poet will still clap them up.

But it wasn’t always like that. And the poets in the city were frustrated at how divided and unfocused everything was.

Poets didn’t know what to charge for their services, so they were undercharging. The more seasoned poets were getting upset. And, young poets coming up in the scene didn’t have much support.

For those new poets, it could be intimidating to approach the already established groups.

With the barrier between the new generation and the old, the contract fee to pay poets was unstable. There was an unorganized mess of not knowing who’s doing what and whose toes are being stepped on.

It was time to do something.

BUILDING THE ROUND TABLE 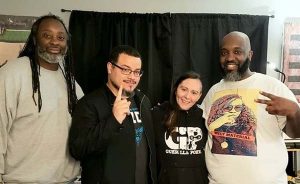 It was originally supposed to be held at a lounge up the street on Monroe Road, but when the owner of the club didn’t show up, poet Ed Mabrey walked down the street to the Bojangles and asked the manager if it was okay if we held the impromptu meeting there. Thankfully, the manager said “yes.”

I was there representing our nonprofit Guerilla Poets. I came in the hopes that Charlotte poets would get over the pettiness and get our booties back into communities for outreach.

At the time, my frustrations were rooted in how overworked activist poets were. That included my group. The need for poetry programs was great and so few poets were stepping up to do the work in shelters and schools.

I’ve learned a lot in the few years between 2018 and 2022. One lesson is: Not every poet needs to be in the classroom. Another is: Just because you don’t see the work don’t mean it ain’t getting done. 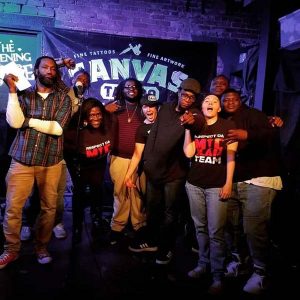 This meeting at Bojangles proved to be vital to Charlotte’s poetry scene. It helped me see that poets I thought weren’t engaged in outreach were, in fact, doing their work behind the scenes.

Poets who had stepped on each others’ toes by booking events the same night as their colleagues didn’t even know their events were happening.

Those who had made a career of poetry didn’t think to create a stepping stone between high school and the real world  because, frankly, no one had done it for them.  It wasn’t something they automatically thought of.

If Jay Ward hadn’t called us all together, we may not have ever known.

One thing I did know in that moment – watching it all go down from my plastic booth eating my seasoned fries – was that the man facilitating that meeting was a natural leader. We were watching a real Poet Laureate in action … before that poet even knew he was a Laureate.

One major reason the meeting was so successful was how Jay facilitated the conversation. When a poet would get off topic, Jay would kindly, yet firmly, shift his gears back.

If a poet got a little heated, and someone tried to interrupt, Jay would hold a hand up and assert that the room let that poet say their peace.

For the most part, everyone left that day feeling like something had been achieved. 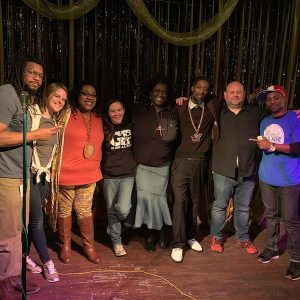 At the end of the day, we understood each other better. And we had a nifty new hashtag – #charlottepoetry – to trace all the events in the city.

But, I felt the biggest takeaway of all – the one  that shifted everything – was that over 50 poets showed up at a Bojangles because they cared.

Have you ever tried to get a bunch of poets to show up at the same time to anything? It’s like herding cats.

But our Charlotte poets did.

“THIS IS FOR ALL POETS.” 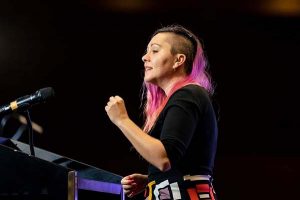 Poets showed up that day for the next generation of poets, and they did it even when the venue’s doors were closed.

Showing up for each other is the heart of Charlotte’s poetry community. We show up. We do the work regardless.

When I was asked to write about being there that day, I went back and looked at the Facebook description for the meeting. In it, you can see the commitment and care for the poets in this city. It makes me proud to be a part of Charlotte and blessed to have  been there that day.

He also wrote: “This is for ALL poets; there is no hierarchy and the invitation is not based on what stage you are in your career.”

At the end of the description is the sign-off: “Peace family, hoping to see you soon!” And that’s how I feel about so many of the poets in this city, including Jay, our Laureate himself. We’re family.

So I hope to see you, reader, out there at a poetry event soon, so you can become family, too.