“The human foot is a masterpiece of engineering and a work of art.” — Leonardo da Vinci

All those subjects and more are woven seamlessly and energetically around this polymath’s core interest: his art and how he makes it. 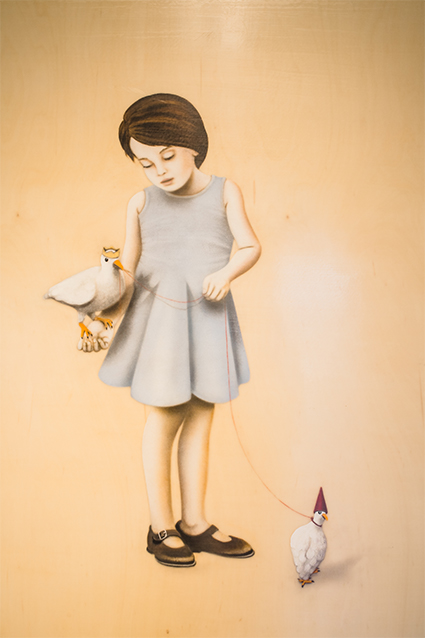 A visit to Hernandez’s website provides a chance to see him working in his studio and to see artwork you’ll probably recognize. One of his 1999 paintings became the album cover for the rock band Train’s 2001 release, Drops of Jupiter. He also created the band’s unique typeface.

Hernandez’s work is the product of intense labor, movement and physical effort. He uses a technique called encaustic painting, which dates to the 1st Century CE and is known for its durability, depth and luminosity.

With encaustic (from the Greek meaning “to burn in”), oil paint is applied to heated beeswax and crystallized tree sap, called dammar resin, typically in an 8:1 ratio. The beeswax does not melt or spread itself. That’s part of Hernandez’s job— heating the wax with a blowtorch and laying it out, in swift, broad strokes with a spreader, fusing each layer to the layer beneath.

The process takes creativity, skill, energy, endurance and an understanding of how the components work and meld together. It’s art with a dash of science. It requires intense physicality and movement.

A musical Train and a physical train wreck

Hernandez was born and raised in Atlanta. He was recruited to play football at Georgia Tech in 1983, but was redshirted before his freshman season after he injured his back at practice. That winter, he had surgery on his back, but was unable to return to football. He continued his studies in architecture while working as a project manager for a construction company. For a few years, he stopped drawing homes and focused on building them. But, it wasn’t to last. Something inside him wouldn’t let him stay still.

After a few years, he felt compelled to paint, even if it meant starving. He left construction to focus full time on art—a pursuit that, for him, engages mind and body—and has been at it for 30 years.

For Hernandez, dynamic movement has always led to dynamic art. An extremely physical art form came naturally for him. 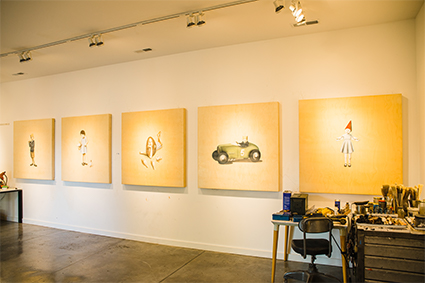 A former football player, Hernandez has the build and stamina for physically demanding work. But, the sport that fueled his athletic build and style, also gave rise to old injuries that left him “an orthopedic train wreck,” according to a former doctor of his.

In 1984, during spinal surgery to repair a herniated disc, the surgeon nicked a nerve, resulting in ongoing “quirks” in Hernandez’s foot. For years, they were little more than a nuisance. But, last year, they became increasingly painful and destabilizing. In the years after his disc surgery, Hernandez had been pronating — turning the sole of his foot inward — essentially walking on the outer side of his foot.

Making matters worse, Hernandez works in such an intensely focused way, often for eight to 12 hours at a stretch, that he wouldn’t fully notice the pain until he stopped. And when he did, he was almost unable to walk at all. 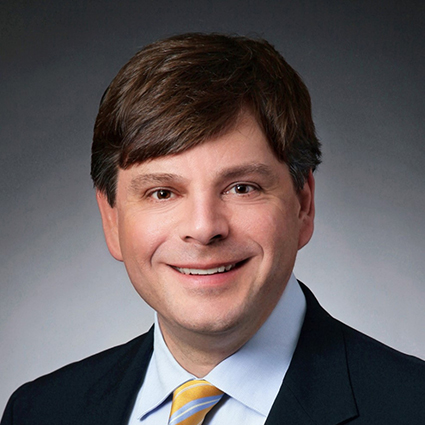 Enter Dr. Carroll Jones, a fellow Atlantan and a foot and ankle specialist with OrthoCarolina. Hernandez says he liked Jones and felt comfortable in his care. He appreciated that right up to the morning of the surgery, Jones was thinking about the best way to approach this challenging foot.

Photo Credit: Ernesto MorenoHernandez’s surgery, if we are to be specific, is called cavus reconstruction with triple arthrodesis. In Hernandez’s case, surgery involved moving a ligament and removal bone. Triple arthrodesis (also called hindfoot fusion) removes cartilage and locks the bones together to form a bone bridge, hence all those pieces of metal.

Hernandez says that, like an artist, Dr. Jones also has the creativity, skill and understanding of how the body’s components work to create his own work of art in the form of a restored foot.

Standing up and creating again 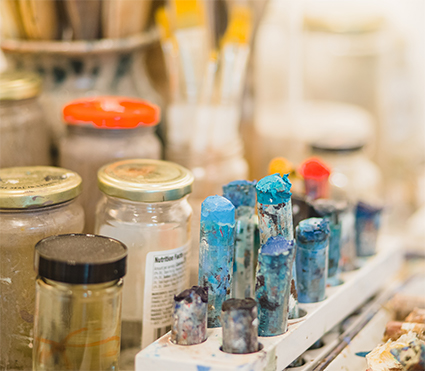 Six months post-surgery, Hernandez is progressing well and about to begin physical therapy at OrthoCarolina. Any pain he feels now is “healing pain,” not the pain of a damaged foot.

He can walk normally again, the sole of his foot turned towards the ground, and wear his normal shoes. He rides his motorcycle. He stood and fished for hours on a recent beach trip. And, crucially, he can work again without being hindered by his foot.

All thanks to a capable surgeon and to medical science—with a dash of art.

With special thanks to Becky Headen, who is engaged to Hernandez.