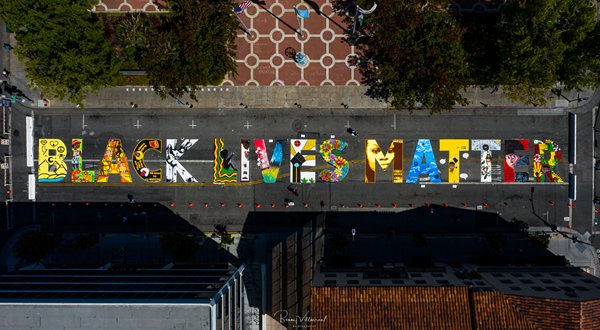 The impact of Charlotte’s Black Lives Matter mural has reverberated through the Queen City … but it hasn’t stopped there.

Within hours of the completion of the BLM mural in Uptown Charlotte, artists in the Capital Hill area of Seattle reached out to one of the Queen City artists involved to get advice and information to follow suit. The templates and tactics used on the 200 block of 200 S. Tryon Street formed the foundation of that mural and several others. Since then, the stencil plans, measurements, best practices and paint types used in Charlotte have been sent across the country and the world.

When Spartanburg, SC wanted to create their own mural, several of the Charlotte mural artists – Abel Jackson, John Hairston, Jr., Frankie Zombie and Darien Flemming – jumped in to paint. DeNeer Davis, one of artists helping to mobilize new murals on Beatties Ford Road, painted a letter in Spartanburg, too.

One of the most vibrant examples is the Black Lives Matter mural painted in Palo Alto, California, pictured above. The City of Palo Alto’s public art coordinator reached out for instructions. After basing their work on Charlotte’s instructions, Palo Alto is now seeking to seal and protect their art in the same manner used here.