From Healthcare Worker to Floral Designer: A Blossoming Creative

When the pandemic hit, Olivia Chisholm found another application for her work as an occupational therapist. She launched a creative project called “Giving Black Women Their Flowers,” an initiative in which she began delivering floral bouquets to Black women all around Charlotte. It took off here in the QC, and eventually got some national attention.

With a background in occupational therapy, Chisholm  began shifting to inclusion and equity consulting and programming with companies such as  Microsoft. When the pandemic hit, while continuing to work as a healthcare worker, she shifted yet again – this time, to bringing creative work to neighbors, friends and her local community.

The truly lasting shift happened when she started “Giving Black Women Their Flowers.” #GBWTF began as a creative engagement initiative in which floral bouquets were delivered to Black women in Charlotte.

And then, she partnered with another Black woman-owned business to design and print a corresponding greeting card that caught the attention of The Apollo Theater in New York and shifted the initiative “from a local hug to a national love letter.”

Inevitably, her powerful #GBWTF project has become a catalyst for shifts in Chisholm’s own life. From healthcare worker to floral and interior designer. From isolation to connection. So, we planted ourselves down to learn more about Chisholm and her blossoming project.

As you gave bouquets to Black women, and they then referred you to other Black women, how did this shift your project? 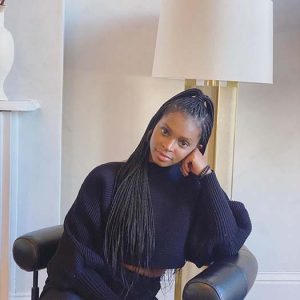 It shifted my project from being something I was doing for my friends and other Black women in the community that I had missed seeing, into a larger project that extended to women I had never met before. It bloomed beyond my own inner circle into a communal mandala. This project not only shifted itself; it shifted my life to not only planning inclusive community initiatives but to also designing them. It shifted me from admin into artistry.

How have recipients responded to you and your project? In other words, what’s been the larger impact of these bouquets?

The Black women who have been given flowers have responded immensely. Some have cried — saying they have never received flowers before. Some have danced at the door — immediately calling the sender in gratitude. Many of them also took action to send a bouquet to another Black woman. I think one of the most beautiful things about the project thus far is the metaphorical giving of flowers.

It is a giving that does not ask for labor or action from a Black woman. It is the giving that meets her where she is — often at home — and affirms that we see all she is doing, all she is conquering. It is giving right back to another Black woman because we want her to have her flowers, too. It is the circle of giving without requiring. It is love.

These flowers are gifts to Black women. How has this project been a gift to you, personally?

I started this project when I was still working in healthcare. We were at the very beginning of lockdown, and I was very isolated. I lived alone and would come home from the hospital very fatigued. Those pandemic shifts were like nothing I have experienced.

This project, in a way, was one of the initial forces that sprung me into finding the good when there was so much loss. It has been one of the most positive and prideful things I have done to date. It carried me through a time where I could have easily slipped into a ton of sadness.

I did slip at times, and I still do, but this project was and has always been the light at the end of the tunnel. It has connected me with the most amazing people. It has connected me more deeply with flowers and nature. It has shifted my career from healthcare worker to floral and interior designer. It has been the gift that has given me my own flowers.

How did #GBWTF get on the radar of The Apollo Theater? What’s been the response or result of the greeting cards being distributed nationally to influential Black women?

I was delivering handwritten cards when I began, and I wanted my own custom card. I decided to make a greeting card in alignment with this initiative, and later down the road, shortly before it was launched to the public, the printing company notified me that the Apollo Theater wanted to use the card in their gift box for their annual luncheon. That was an easy yes! I sold out of the originally designed greeting cards, but I am so excited to bring more “Giving BLACK Women Their Flowers” products.

How do you fund all of this amazing work?

Thus far, it has really been funded by the community, for the community. My company – To Live in Color, LLC –  is a creative firm that specializes in floral/interior design and creative cultural programming, so a lot of the funding thus far has been solely grassrooted. Being able to find creative solutions has been key for me. I have a second program installment approaching this summer partnering with the Bechtler Museum of Modern Art to offer a teen summer camp for underserved teenagers. I believe being in a community with good people facilitates these solutions.

I have launched the #GBWTF pop-up series in which I will partner with businesses and organizations to offer this event at their location.  Bouquets will be pre-purchased or sponsored for Black women to pick up at the location. Bouquets are not designated to any particular person.

Anyone who identifies as a Black woman is more than welcome to show up and receive her flowers at no cost until items are no longer available. It is important to honor the activism of giving to Black people without asking for time, labor or money, so getting the pop-up series funded through strategic partnerships has been an integral part in taking the #GBWTF project to the next level.

How can folks help #GBWTF continue to grow and evolve?

I am actively looking to partner with businesses and organizations that are in alignment  to offer the #GBWTF pop-up event at a variety of locations.  I want this to reach as many Black women as possible, as the impact and feedback have been so well received from the Charlotte community and nationwide.

Chisholm was recently interviewed by Cheryl Brayboy on WBTV’s QC Life about her #GBWTF. Watch it below.

SHIFT YOUR FOCUS TO OLIVIA CHISHOLM AND #GBWTF: