How a Battalion of Army Men Defeated My Perfectionism

Do you know your enneagram?

It’s a personality test that designates you as a number between 1 and 9. Each number has a descriptive meaning. I like using this test when I cast actors in a play. They take the test and tell me what number they agree with and we talk about it. Halfway through the rehearsal process, actors take the test again but this time not as themselves, as their character. Knowing their character’s enneagram helps them identify a line or relationship that wouldn’t make sense otherwise. Empathizing with their character advances their craft. (If I’m losing you, please Google “enneagram test” then come back to see where I’m going with this.)

I’ll tell you mine if you’ll tell me yours

I’m an enneagram 1 (perfectionist) but I tie for second place as a 4 (individual) and a 7 (visionary). I’d prefer to be identified as a 4 or a 7, dang it, but I’m a solid 1. I took the test several times hoping to achieve a better number – totally a 1 thing to do.

Despite my apparent bent toward perfectionism, my journey as a new creative in Charlotte has not been perfect as I continue seeking kindreds and stumble around my new city.

I found a podcast called Makers and Mystics by Stephen Roach who records and lives in Greensboro. He’s a musician, writer, poet and artist himself. He also hosts an annual two-day creative conference in Winston-Salem called “The Breath and the Clay.” On his weekly podcast, Stephen interviews a different artist and highlights their creative process. I also read his book called 5 Creativity Killers and How to Avoid Them, and it turns out perfection is one of the killers of creativity. An antidote for perfectionism, according to Stephen, is to play.

To strengthen creativity and quiet the perfectionist in me, I needed to practice spontaneous play. The “1” in me hates to improv, but I decided to do something silly and trust my instincts.

From Perfection to Play 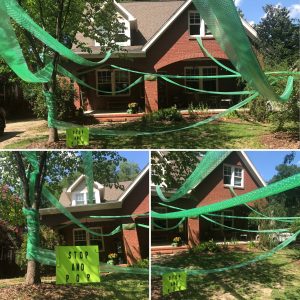 The first thing I did was order a boatload of plastic army men from Amazon. Next, I created spontaneous yard art. Not with the army men (since they hadn’t arrived yet), but with a humongous inflatable shark. This happened just before a big storm hit Charlotte. I shoved the shark high into the front yard tree and made a yard sign that said “Sharknado!” It was tacky and chintzy, but it got me out of my stuffy head and helped me meet a few neighbors.

I’ve been practicing play ever since by making simple, sporadic yard art. For example, when I accidentally murdered every single garden flower via dehydration, I stacked their carcasses in the yard with a “Sorry We’re Dead” sign. Or that time at Lowes when I saw mega-rolls of green bubble wrap that led to a yard “pop” art installation.

Turns out, yard art is an actual thing already happening in Charlotte. I didn’t make it up, and there is an official Yard Art Day (created by Queen City photographer and esteemed creative Deborah Triplett) happening on Labor Day for anyone who would like to participate.

Dialing up the play, up the mountain 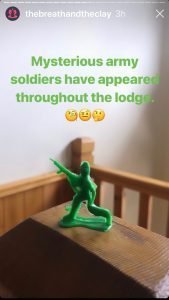 I met Stephen Roach at his winter conference, which led to an invite to a cool summer artist retreat in Moravian Falls, NC. I just got back from that retreat a few weeks ago. Artists were asked to bring their paint brushes, pencils or clay to create with during breaks. I don’t know how to paint or draw, so I brought the army men.

I initiated a sneak attack installation and by the end of the retreat, the place was covered with army men. Stephen and the others didn’t know where they had come from, but everyone engaged in spreading them around. Army men found their way into vases, on banisters, all about the kitchen and in the showers.

We took votes on who we thought started it and posted photos on social media. In a way, I was playing with Stephen – the fella who told me to break perfection with play. That felt surreal…and kind of perfect.

Tell me your enneagram number in the comments below or let me know of other personality tests you prefer. Please find me and say hello at the next CreativeMornings/Charlotte gathering. Perhaps we can invade the Queen City together with some spontaneous art. (BYOArmy men!)