Live From The Print Shop Gives Us Something to SHOUT About

It can come when two instruments sync up to create beautiful music. It might happen when two ideas blend together to create a bold new concept. When a performer connects with an audience, whether in person or virtually as it has been these days, they create harmony. And harmony can happen when two people use their talents in conjunction to make something unique.

“Live From The Print Shop,” a virtual, live music series from the minds of Rhasaan Smith and Terance Murray that launched on YouTube in May 2020, creates harmony in all these ways and more. It’s a harmonious blend of live music, spoken word, screenprinting, video and audio production, and a strong desire to share the creative minds and people of the Queen City. 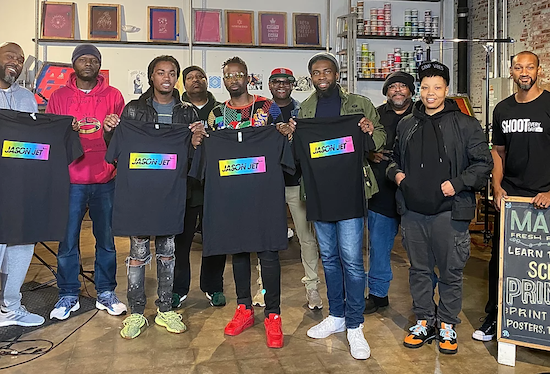 There’s the old saying “jack of all trades; master of none,” but in the case of “Live from the Print Shop” it should say “master of many.”

The virtual concert series takes inspiration from NPR’s Tiny Desk Concerts but flips the idea on its head by hosting the performances in a local print shop, MacFly Fresh. At first glance, it’s a familiar concept that many of us have become familiar with over the past few months as concerts have gone virtual due to COVID-19. But as you look deeper, one will realize that this is a wholly fresh experience in the Charlotte music scene.

So… let’s take a closer look.

“Live From The Print Shop” is the brainchild of two Charlotte creatives Rhasaan Smith and Terance Murray. For years the filmmaking, music-loving duo wanted to create a unique way to highlight Charlotte’s wide variety of independent musicians. And then Smith stumbled upon a video of Charlotte musician Jason Jet.

Smith, who moved to Los Angeles from Charlotte in 2016, was feeling homesick and wanted to watch a Charlotte musician in action, and who better than Jason Jet. After watching the video, he reached out to Jason and suggested that he submit the video to NPR’s Tiny Desk Concerts. Turns out that video HAD BEEN his Tiny Desk submission. And he wasn’t selected. 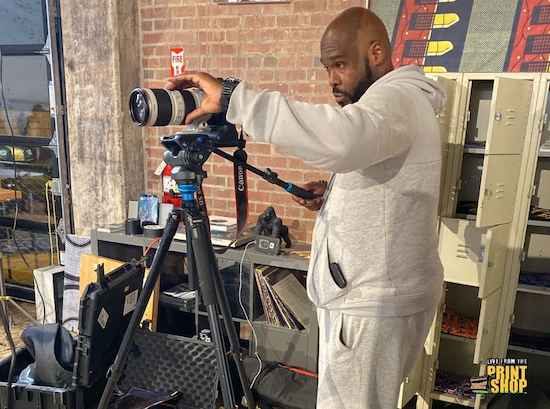 Rhasaan working the camera. Image via Live From The Print Shop.

“I told him that we should do our own in Charlotte,” said Smith. “It would give other artists in Charlotte an outlet. His story is not the only one like that.”

Jason Jet told Rhasaan to reach back out once he had an idea. And he did just that. Two years later, Jason Jet was the first performer on “Live From The Print Shop.” But before they could get performers lined up, Smith and Murray needed to solidify the concept for the show… and find a venue. Enter Eric Ndelo and MacFly Fresh.

TRADE IN THE TINY DESK FOR A PRINT SHOP

In late 2019, Charlotte-based design and screenprinting business MacFly Fresh moved into their current space at Camp North End. When Rhasaan Smith returned to Charlotte for the wedding of friend and business partner Terance Murray, the two stopped by the print shop to visit Murray’s now brother-in-law, Eric Ndelo, the founder and owner of MacFly.

After the visit, they knew they were on to something special.

“We decided to do a show where we could feature Eric and his print shop. We could have t-shirts printed while the band is performing that we could give to the artist,” said Smith on the idea.

On each episode of “Live From The Print Shop,” while the musician is performing Eric is in the background working up screenprinting magic. The cameras cut in between shots of the musicians and shirts being pressed. It’s like two different storylines racing against each other to see which will be done first. Will the performance end before the shirt is done? Or vice-versa? 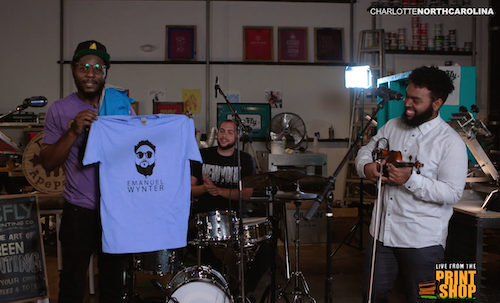 Eric Ndelo presenting performer Emanuel Wynter with his shirt. Image via Live From The Print Shop.

Instead, these two separate visual stories sync up at the end in harmony (there’s that word again) as Eric presents a fresh shirt to the musician that was designed specifically for them.

When we see the shirt for the first time, it’s the artist’s first time seeing the design, too. The viewers at home are treated to a genuine reaction from the performers creating a shared experience between the audience and artist.

“From a storytelling sense, the big reveal is what hooks people in,” says Smith on why having these simultaneous storylines of music and printing is important for the show.

Each shirt design is created by Dane Chong of Weso Creative. Smith sends Chong music of each performer up to New York, Chong listens while whipping up a fresh design, then he sends the design down to CLT for Eric to create a screen for the printing machine before the show.

This provides each performer with a custom piece of merch for themselves, their fans, and fans of “Live From The Print Shop.” Each of the shirts created so far are available for purchase here.

Rhasaan got the idea from previous work he and Terance did with R&B artist Raheem DeVaughn. Their production company City Films was hired to film Raheem’s live events. While Raheem was performing, he had an artist on stage creating a painting that would be revealed to the audience at the end of the set.

“I always thought that was a dope concept. It was fly. At the end of each show he would auction off the painting,” recalled Smith. “It was music-inspired art.”

In a time where so many musicians and creatives are out of work, it was a perfect time to launch “Live From The Print Shop” to help amplify the voices of the many talented artists in Charlotte and the surrounding areas.

“When COVID-19 started, we were a little apprehensive to start shooting anything,” recalls Murray. “But then you find out that these artists are ready to do something. This has been a cool way for them to express themselves.” 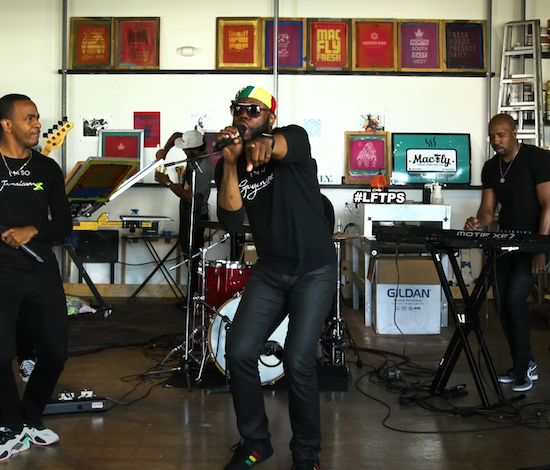 RAWALLTY performing on Episode 4. (Notice Eric printing in the background.) Image via Live From The Print Shop.

Smith offered his thoughts as well: “We took lemons and made lemonade. When quarantine started, people needed something to uplift them and make them feel energetic. And it gives artists an opportunity to showcase their talent instead of sitting at home growing cobwebs and performing for themselves.”

And when the pandemic is all said and done, we need to remember to continue supporting these artists.

“With the show, I want to create a platform to do what the radio stations of this city aren’t doing. We want to tap into the Charlotte music scene. There’s so much here,” says Murray. And this isn’t the duos first rodeo highlighting the treasure trove of creativity in Charlotte.

They’ve been creating and amplifying the voices of other creatives in the Queen City for decades.

IT’S HOT IN THE CITY

Rhasaan Smith, a Philly native and graduate of the Arts Institute of Philidelphia, gained film experience on sets ranging from Beloved and 12 Monkeys to Saturday Night Live in NYC before moving to Charlotte in 1998 to work for Power 98.

Virginia native Terance Murray studied Barber-Scotia College, an HBCU in Concord. After graduating, he became a production intern at WBAV in 2001. It was in the studio where their harmonies would sync and the friendship and professional relationship would begin to blossom.

They quickly learned that they both had a passion for film and music. In 2003, a few years after meeting they began their show City Heat. The show was focused on showing music videos of the city’s musicians and highlighting the unique events, people, and businesses of Charlotte. Hosted by radio personalities Janine Davis and Eddie Owens, the show was a hit.

“This was before you could search any video you wanted to see on YouTube. When we were doing City Heat, people couldn’t easily see music videos like that,” says Smith about working on the show. Most of the videos they received were sent in by record labels but then Murray had the idea to start featuring videos by independent artists alongside those of high-profile musicians.

Flashforward to 2020 and you can see the influence the show had on the inception of “Live From The Print Shop.” And you can see how the duo’s roles have solidified over the years. 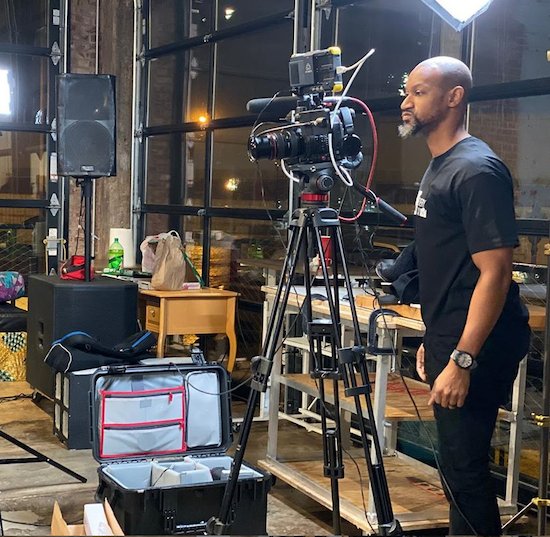 Terance framing the shot. Image via Live From The Print Shop.

“I brought the story aspect and Terance knew how to shoot. He had the eye and technical know-how. That’s how we’ve meshed ever since,” says Smith on how the two work together. “Now every time there’s an idea, I bounce it off him or he’ll bounce it off me. I’ll sell him a story concept and he tells me what we need to shoot it.”

“Live From The Print Shop” keeps the team busy but as any creative can relate to, this is just one project on the juggling act of artistry.

These days Smith lives in Los Angeles running his music management company Aqua Management and returns to the Queen City for “Live From The Print Shop” filmings. And Murray runs his production company Shoot 2 Edit Studios, LLC here in Charlotte.

“It’s important that we are building the show around talent in the city instead of bringing in celebrity figures. We want to build the show organically and build up the artists in our city,” said Murray.

And it’s safe to say that they are building something special. Music, spoken word, film, design, screenprinting, passion, and talent all working in perfect harmony. And it’s all happening live from the print shop.

Stay Tuned For Upcoming Shows with “Live From The Print Shop”

Connect with Rhasaan and Terance

WATCH THE MOST RECENT EPISODE WITH CARE AUSAR

WATCH THE AFTER SHOW ACOUSTIC CONVERSATION HOSTED BY BLUZ

This Queen City creative profile is the fourth in a nine-part series titled “Something to SHOUT About,” where we interview various Charlotteans about their creative journeys and the work they are doing today. This series is sponsored by Charlotte Center City Partners and Charlotte SHOUT.

To keep in line with the four pillars of Charlotte SHOUT, the profiles focus on the categories of art, music, food and ideas. Rhasaan Smith, Terance Murray and the team at “Live From The Print Shop” are using their talents to uplift the creatives and musicians of the Queen City by giving them a platform to showcase their unique abilities.

Click here to read our previous profile on Eric Ndelo of MacFly Fresh, the man to puts print shop in “Live From The Print Shop.”