Making the McColl Center Accessible to Everyone

This article is the second in a series by Liz Logan about the Fall 2019 class of artists in residence at the McColl Center for Art + Innovation. Read the first installment here.

When I was a kid, I remember riding in the backseat of our Ford Aerostar, gazing longingly at an ARP church in Uptown. Its Gothic Revival architecture gave the structure a castle-like aura. As the Center City grew up, the structure remained in-tact (despite a 1985 fire) and was later renovated and transformed into the McColl Center for Art + Innovation.

I can tell you with full confidence that this building, even with its new balconies and enclaves, has an air of magic and majesty. Just walking through the doors can lead to feelings of creativity and connectedness. This is precisely what is being cultivated through this community-driven experiment.

The idea is that doors of the McColl, with its free admission (though there is a $5 suggested donation), are truly open to everyone.  Their fall program was an incredible example of that. The Center compiled a group of local social practicing artists — Dammit Wesley, HNin Nie, Marlon Morrison, MyLoan Dinh and Helms Jarrell — to work together for a six-week initiative leading to an exhibit that opens eyes, shifts paradigms and makes individuals who typically shy away from the Center feel curious and welcome. 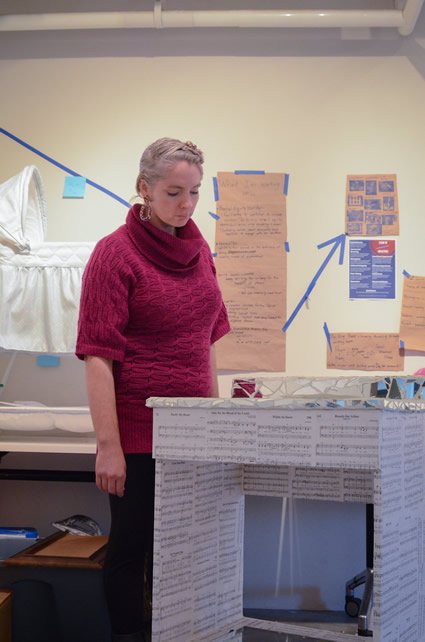 Throughout my time interviewing each of the artists (and even the McColl staff members), I encountered the circulating narrative that the McColl Center building—not to mention Charlotte’s institutional art in general—has been inaccessible for a variety of citizens for a variety of reasons. For years, the McColl Center has been a hub for resident artists. With sessions each season, 18 artists, typically from out of town, were invited to short residencies. Selected artists are given an apartment nearby and work diligently towards their individual projects. But, the fall 2019 residency was the first of its kind. It aimed to switch the narrative and the perception of what happens in this regal, once-church establishment.

And, Helms Jarrell was asked to be a part of that.

Helms Jarrell doesn’t want you to just know her. She wants you to know her work.

If you don’t know Helms Jarrell, that’s ok. It’s probably because she doesn’t want you to. It’s not that she doesn’t want to connect. In fact, she’s one of the most connected people I know. If you haven’t heard of her, it’s because she is the epitome of underground social justice, at times a guerilla artist with her Banksy-style messaging with her Helms Jarrell artistic aesthetic.

Years ago, before forming the West Side Land Trust (out of her living room), Helms, along with teenagers and some local adults from her neighborhood of Enderly Park took those dreaded yellow “We Buy Houses” signs and, yes, defaced them. Those signs, which represent investors buying up property and shoo-ing away longtime residents in exchange for profit, were painted beautifully with phrases like “Community can’t be bought” or covered the phone number up with a black bumper sticker, leaving the sign reading “704-NOPE.” (My personal favorite.)

It’s no surprise, then, that Helms was accepted into the McColl residency program alongside these other Charlotte artists who are, as the application put it, “building power.” Helms said she was surprised she got it. She thought it must be a fluke, but it certainly was not. Helms and the other artists with her were carefully and mindfully selected.

MyLoan Dinh Hits with Her Truth

The shared space for these artists is relatively small, given the breadth of the projects coming to life. A handful of the artists have their own studios and when I stopped for a studio visit, only Jarrell and MyLoan Dinh were there, working alongside one another on separate, but equally passionate projects. 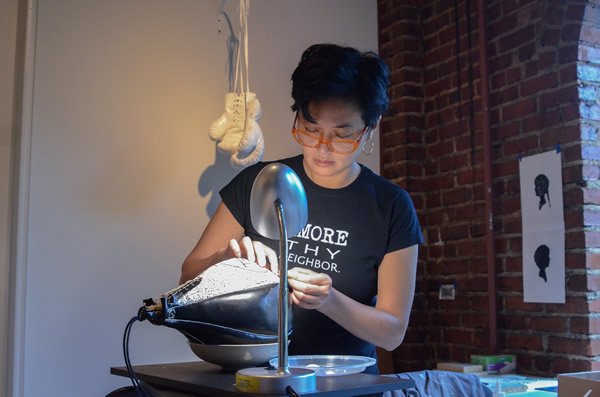 Dinh, on a stool with her legs crossed, glasses resting on the tip of her nose, was leaning over boxing gloves, carefully adhering broken eggshells to every inch of its surface with tweezers. Her series, “The Woke Out Series” is covered in symbolism. This Vietnamese tradition of covering items in eggshells takes on various meanings for Dinh.

The boxing gloves signify fighting for what you believe in. One glove was originally patterned with an American Flag. Dinh’s deliberate choice to cover it in off-white eggshells represents the white-washing of America. Dinh also created a boxing speed bag emblazoned with the word “Truth,” acknowledging that the truth takes a hit and that, often, we just talk around it.

Their Work Works Together

Themes of truth and what happens when we impose our will on others echoes in Jarrell’s work, as well as Dinh’s. She focuses on another “other” — the evicted.

Like the work she creates at her art shed at home, Jarrell looks at the housing crisis from the standpoint of an insider. All her pieces are created during her residency at the McColl Center are created from found objects at specific locations. Jarrell calls them“eviction piles” — the hordes of things thrown to the curb when families are displaced.

These items have come from families she’s known and some she has not. Jarrell and her family (her two boys and husband, Greg) are no stranger to the effects of displacement. While they have not been displaced themselves, they have lost friends and neighbors in their 12 years in Enderly Park.

“It’s not an enjoyable life experience to lose people constantly,” Jarrell says. And this is putting it lightly.

Jarrell, a pastor, brings her faith into her work by taking these objects and turning them into reliquaries. The implication is that these families who have lost their homes to investors are saints and have made their neighborhood home for years before the gentrification set in. Some people saw rent jolt from $600 to $900 in a matter of months, a huge leap for those on fixed incomes. These rent hikes cause what’s referred to as “informal evictions” and the Jarrells help when they can. Others were simply told to get out.

As part of her project, Jarrell facilitated a workshop to brainstorm ideas on how to build solutions around the financial equity of renters. Jarrell is adamant, like the rest of these social practicing artists, that her art is not about her—she’d rather silently create and allow the conversation to happen while the subjects of her art are central. She hopes this work motivates people to grow in empathy.

The Doors are Open. The Exhibit is Up Until Feb. 8. 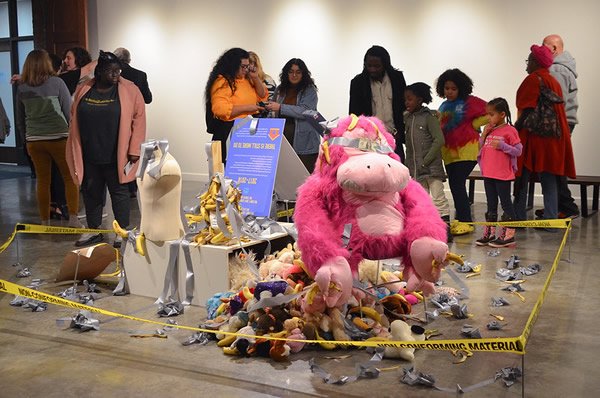 The show, Tarmac, is currently on display on the first level of the McColl, a giant display of stuffed animals and fruit and duct tape encircled by caution tape—a group project by the artists– welcoming viewers to the exhibit, which runs until February 8.  The time to see it is right now.