We’re Off To See The Wonderful Wizard of Charlotte

Toto, I have a feeling we’re not in Charlotte anymore. Or at least it feels that way as characters from the Land of Oz keep appearing in the streets of Crown Town. 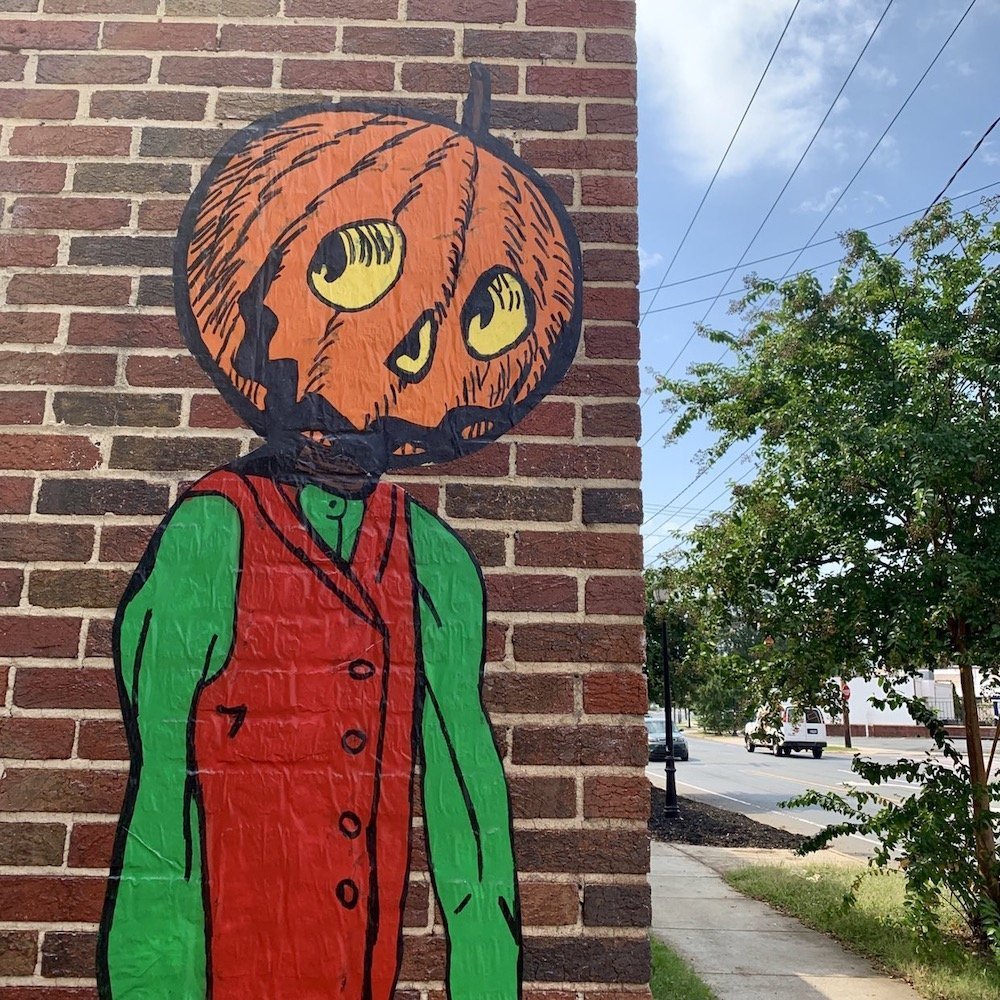 Charlotte’s street art scene is booming right now, so I have learned to keep my eyes open for new pieces that pop up. As soon as I saw Jack the Pumpkinhead on the side of an old, abandoned tattoo parlor on Morehead, I knew I had to pull over and snag a picture for Instagram.

The following interview is a testament to the power of social media. I posted the pic on Charlotte is Creative’s page and within 60 seconds CLTGrafitti commented “@paper.paste.” Within minutes I was messaging with the artist I would come to know as OZ, and within days we had an interview scheduled and within … okay, I think you get it.

Life is pretty cool. One minute you’re taking a picture and the next minute you’re having a conversation with someone much cooler and much more talented than you.

Let’s take a walk down the Yellow Brick Road with OZ as he talks about Charlotte’s art scene, why the Wizard of Oz is his source of inspiration and how and why he does what he does.

How long have you been living/creating art in Charlotte? How has Charlotte’s creative community grown since you started?

I’ve been living in Charlotte my whole life. I love this city. I started doing OZ pastes and stickers in 2011, but just recently started working on things again. I never fully gave it up but definitely took a long hiatus.

When I first got into things, I was skateboarding a lot and spent a ton of time out at the old NoDa foundation. That was really my first exposure to graffiti and street art here in Charlotte.

I wasn’t paying nearly enough attention back then but the scene was very different. There wasn’t really even a hint that the “mural renaissance” was going to hit Charlotte as hard as it has. I will say this, the same people who were hitting heavy back then are hitting even heavier now.

Tell us about wheatpasting. What is the process? How does it work? 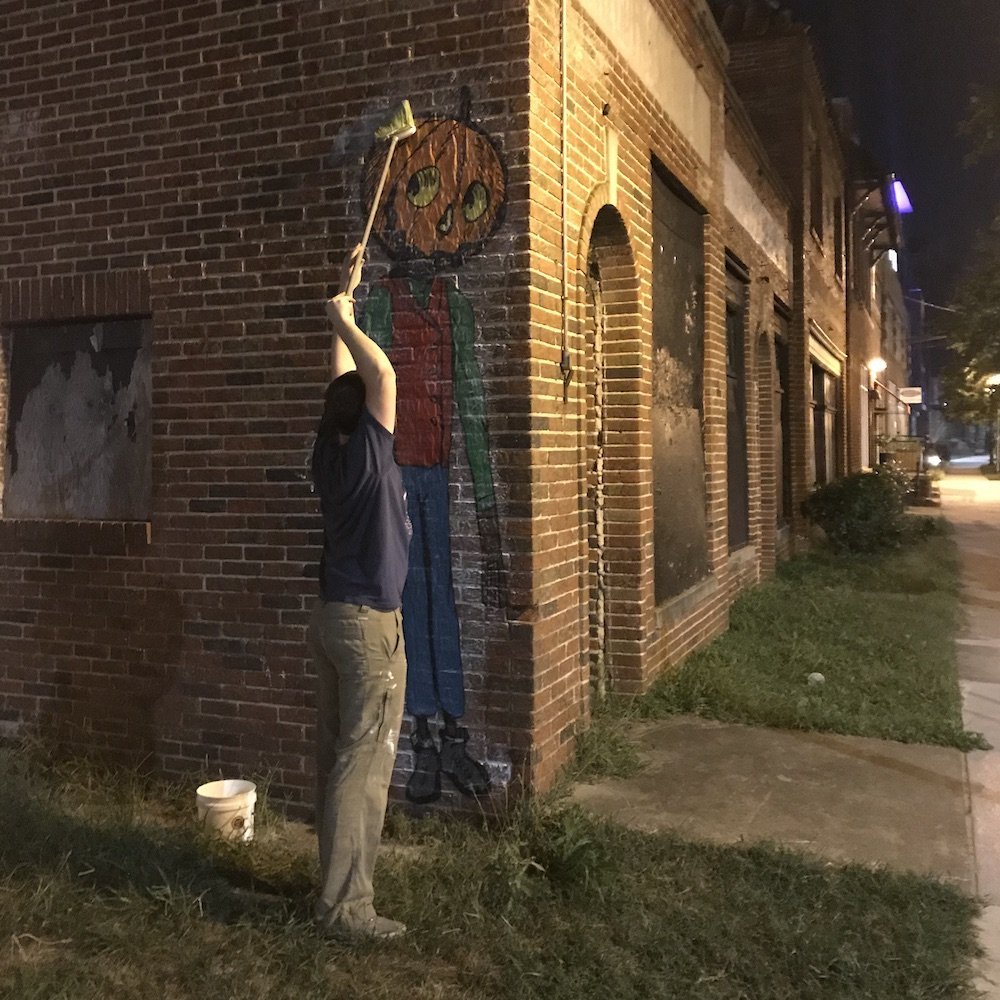 So, traditional wheatpaste is made with wheat flour and water. Sometimes a little sugar to make it stickier. It was initially used to stick up posters that would advertise a circus or a traveling show. Then in the 80s, it started gaining popularity with nightclubs to advertise drinks and specials.

The paste I use is pre-made. The homemade stuff just doesn’t keep long enough. I haven’t been able to find much info, but it seems like the first person to gain popularity from wheatpasting in the modern art era was Shepard Fairey. His OBEY propaganda posters were all wheatpasted and most of his other public work was as well.

He was the biggest reason I chose to wheatpaste to begin with. I just like how quick the whole process is. Paste on wall, paper on paste, paste again on paper and wall. And then you’re done.

You clearly have an affinity to the Land of Oz (don’t we all). Why is Oz such a large inspiration to your work?

I love getting this question. Mainly because the answer is super lame and it catches most people off guard. The Wizard of Oz was the first movie that scared me as a kid. And that memory stuck with me for so long. 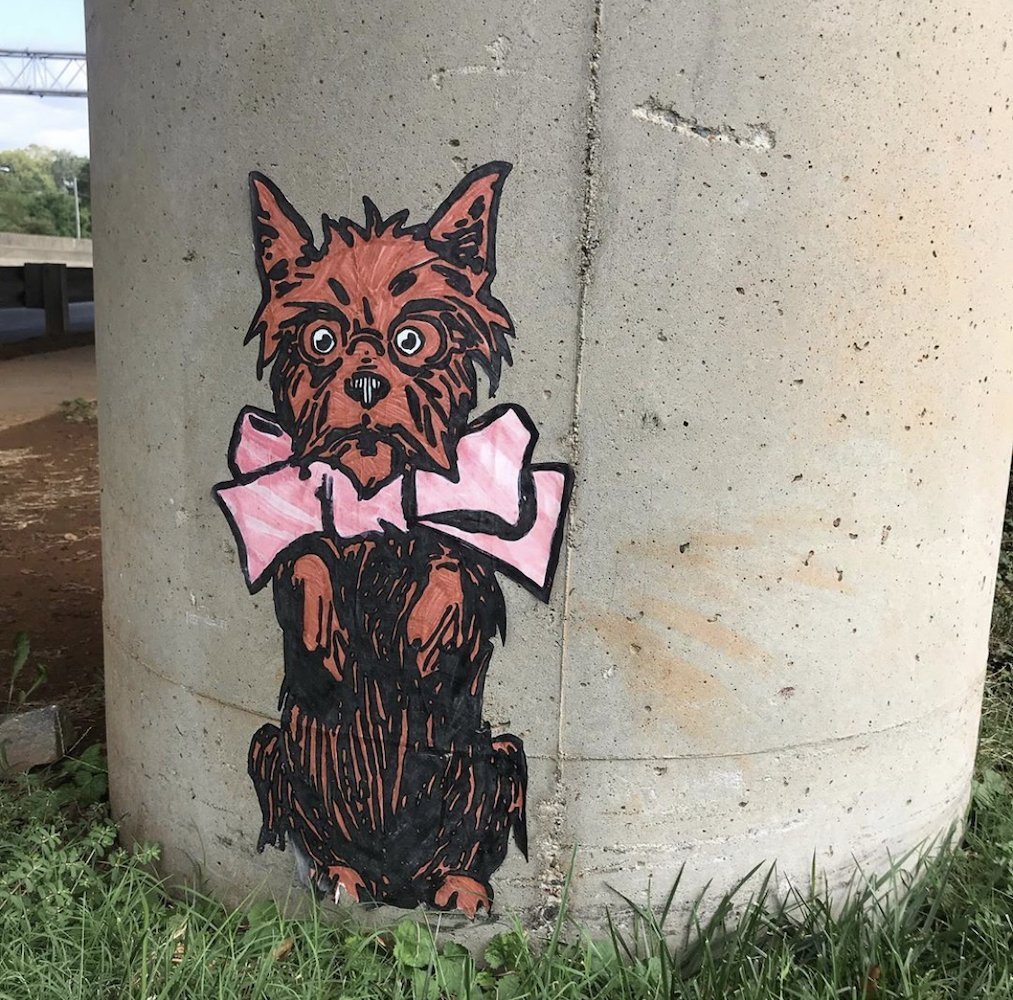 Do you prefer drawing inspiration from the movies or from the books?

Definitely the books. All the characters that I paste up were originally drawn by a guy named William Wallace Denslow. He drew everything in the very late 1800s and early 1900s. I was gifted a copy of The Land of OZ that was printed sometime in the 1950s and that book has become an endless source of inspiration.

That’s where I got my very first look at Jack Pumpkinhead. I have used the movies a few times for source material but that stuff has never seen the light of day. Maybe soon?

Do you find that your wheatpastes get taken down quickly or are they standing the test of time? I hope your latest Jack on Morehead stays around a while!

One of the first bigger pastes I did was on a building on North Davidson. Two days after it went up, the owner put a small sign next to it saying that it had permission to be there and asking the city not to destroy it. This is a super isolated case though.

Unless I paste in a really low key spot, it’s gone within a couple of days. That’s one of the reasons I love street art, as soon as it’s gone I have a place to put something new up. 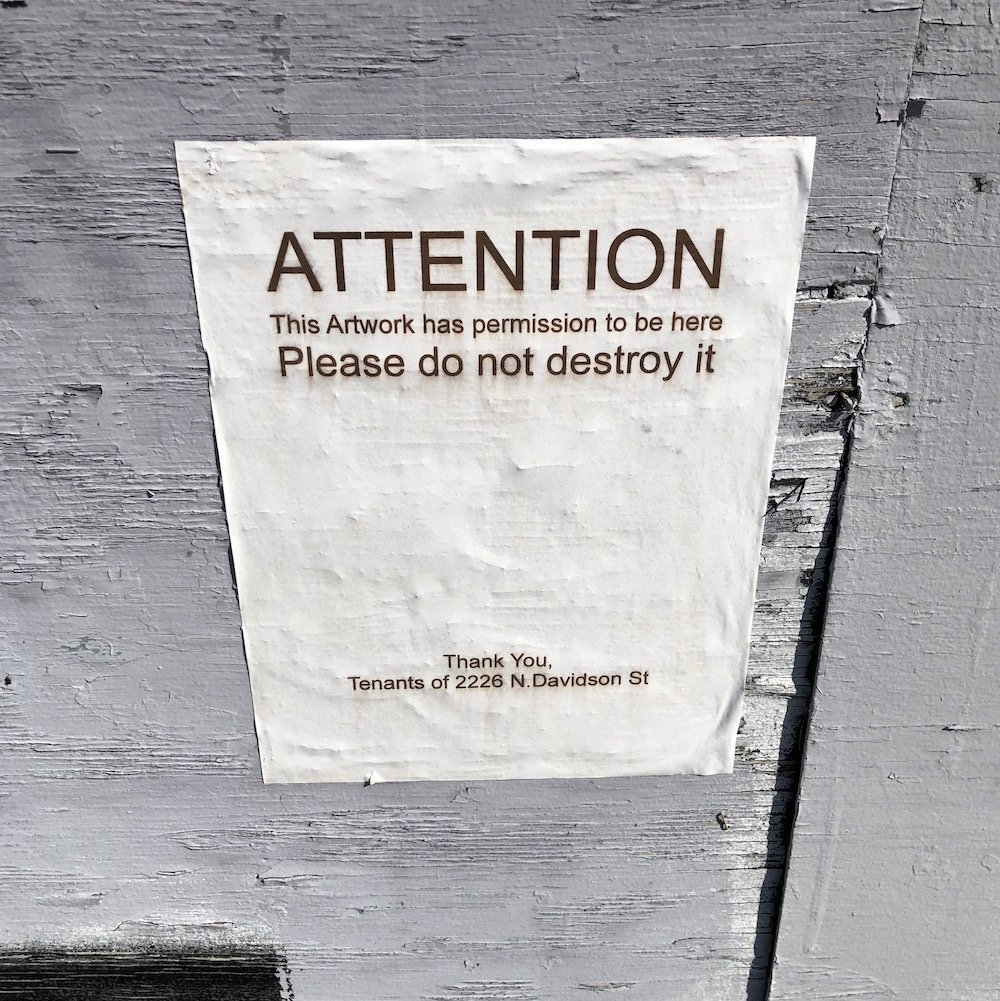 What kinds of reactions have you gotten from your work?

So far all the reactions I’ve gotten have been positive. I’m sure there are people out there who have a problem with my work or just plain don’t like it. I don’t really worry about all that though.

This is kind of a cheesy question. Why do you do what you do and are you having fun doing it?

I love taking boring walls and giving them a little splash of color. I know that a few pieces of spray-painted paper with ancient Oz characters aren’t going to change the world, but maybe they’ll inspire a few people to add their own color to the walls. And yeah, I’m definitely having fun.

Any hints on what your next project will be?

I have a couple things I’m working on. One is really really big. I actually have no idea if/when it will actually make it into the public eye. I’m not sure I could pull it off without getting caught. If anyone reading this has a wall they want to donate to a worthy cause, hit me up! I’m also trying to learn as much as possible so I can start doing some legal work. The mural scene is exploding and I want in!

What other Charlotte artists should be on the community’s radar?

I’m just gonna list off some instagram handles. These are people who inspire me on a daily basis and are working so hard to make art more accessible in our community. Follow them! Show them some love! 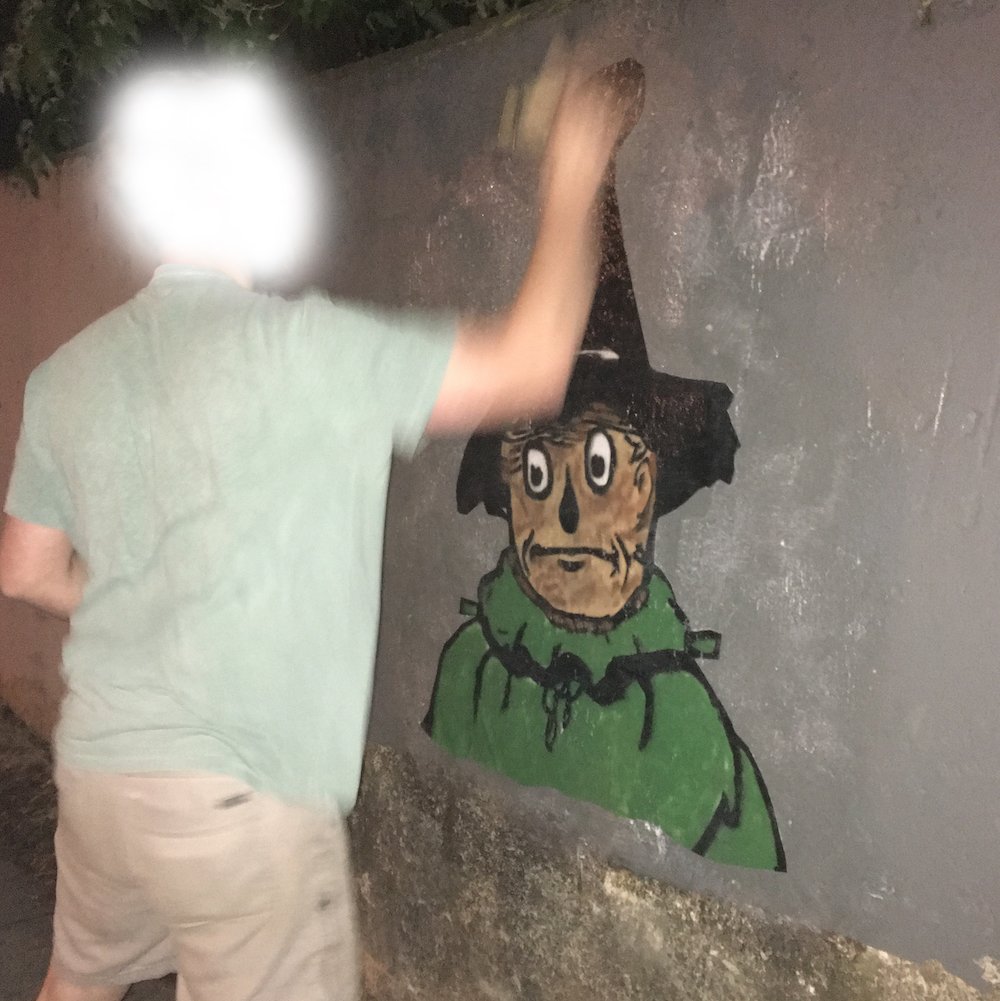 What’s a question you wish we had asked you?

If you had asked me one more question, it would have been “Are there any events coming up that we should be looking forward to?” The answer is yes! Southern Tiger Collective is putting on an illustrators show on October 15th at Armada Skateshop. The day after that marks the start of the Talking Walls Mural Festival. Muralists from all over will be in Charlotte from the 16th to the 19th, breathing some much-needed color into the city!