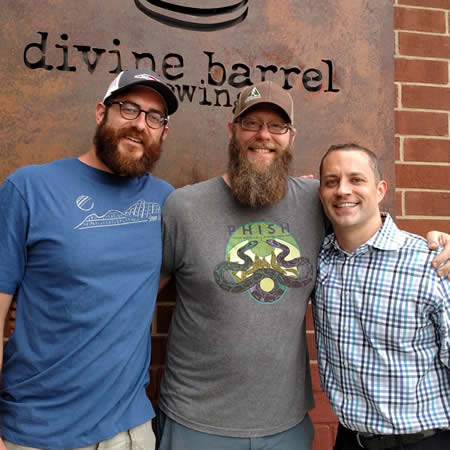 Recently, we shared on Instagram that Gavin Toth of Divine Barrel Brewing named a new beer, “A Rumor of Tacos,” after an off-hand remark made by Charlotte Is Creative’s own Matt Olin.
That led us to ask, “What kind of man would turn to Matt for inspiration?” Thankfully, Gavin agreed to answer five of our ridiculous questions so we could solve that puzzle.

After 10 years in restaurant management, Gavin, along with friends Ben Dolphens and Scott Davis, opened Divine Barrel on “North North Davidson Street” in 2018 with more than just brewing on their minds.  When we asked why not enough people know about the brewery, Gavin first said, “Where we’re located.” But, after a chuckle, he added, “We pride ourselves on being more than a brewery. We are a community center for everyone.”

That shows through in the events they schedule inside the Brewery, from benefits to community meetings. In fact, they’re playing host to a collaboration between fiber art group, Craft, and @CLTChalk art to promote voting. Gavin is also the vice president of the NoDa Neighborhood and Business Association. EDITOR’S NOTE: We wrote about their recent trash can art project in The Biscuit.

Gavin loves his neighborhood. He loves his beer. He loves his team. And, he also admits to having a possibly unhealthy affection for Duane Allman of the Allman Brothers Band.

Where is the weirdest place you’ve been struck by inspiration for a beer you want to brew?

I walked into a brewery (weird, right?) after getting a haircut and the brewer from Buttonwoods in Rhode Island said “Look at that hipster hair.” Thus, the beer was born.

Six inches off my beard. I’ve already cut that much off because my son kept pulling on the beard. Got a bit painful.

What’s the most insane thing anyone’s ever said after trying a Divine Barrel beer for the first time?

We had a beer called “Losing my Lettuce.” It did not have lettuce in it, but someone did say that they could really taste the lettuce in it.

How many times did you wear shorts to work last year … and when did you last wear a suit?

You have a new(ish) baby. If you had to use baby food to make a beer, what would you use? What would you call it? (The beer, not the baby.)

Aaaaaand … one to grow on:

What’s a meme or animated GIF you use too much?