With the announcement that Charlotte SHOUT! is headed back to the streets of Uptown Charlotte from Sept. 17 to Oct. 3, we thought it was high time to see the wizard … the wonderful wizard of Queen City events, Robert Krumbine.

Since moving to Charlotte with his wife and two sons in 1988, Krumbine has been the “man behind the curtain” for many of the city’s most notable events, ranging from the opening of the (sadly gone) Charlotte Coliseum on Tyvola Rd. to Speed Street, City Fest Live, the Novant Health Thanksgiving Day Parade and more.

Producing Street of Champions in 1994

Krumbine also produced the award-winning “Street of Champions” on South Tryon St. when Charlotte hosted the NCAA Men’s Basketball Final Four in 1994. The event transformed vacant storefronts into pop-up businesses and projected the games on the side of a building.

“That event truly transformed Uptown from a business district to an entertainment zone and saw 340,000 enjoy temporary bars, restaurants, and street activities over five days,” he said.

This iteration of SHOUT! ran until 2009, but ended due to the recession.

While several aspects of the festival, like Blues, Brews & BBQ, continued, the remainder were dormant until it was revived and reimagined in 2019 to commemorate Charlotte’s 250th anniversary.

While COVID-19 postponed SHOUT! in 2020, Krumbine says it’s roaring back.

Krumbine is known as a man on the move, so we thought we’d better tie him down for five ridiculous questions before he sets out into the streets to scout for SHOUT!

1) You’re known as the “Event Wiz” … if you were at Hogwarts, which house would you be in and why?

I would have to say Ravenclaw because of my sense of curiosity and creativity. Plus, having a guy named Flitwick running the joint just rocks my face off.

2) You’re also an expert on Star Trek. Which building in the Uptown skyline do you think would make a great starship?

I’m not sure about a starship, but let’s face it, the Odell building looks like the secret lair for Dr. Evil. I just know the roof is going to open someday so a giant laser can shoot a beam into space that will destroy every satellite and disrupt our communications and GPS systems worldwide.

3) Give us a meme/animated GIF you like that describes your life at work. 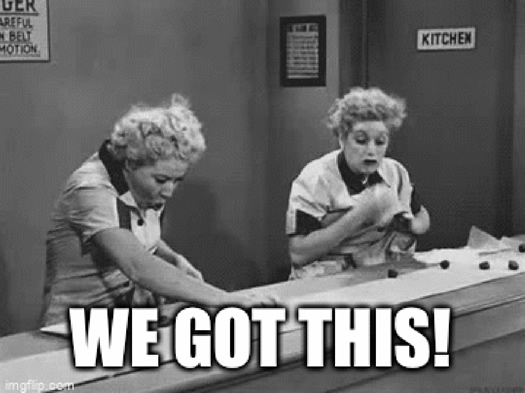 4) Would you rather wear a Hawaiian shirt every day for a year or shave your beard?

Easy! Hawaiian shirt … with a fun hat … maybe a pork pie. Can I hang out in my tiki bar all day too? I mean, c’mon, man!

5) You walk around a lot at events. What’s a pro tip you have for taking care of your feet?

Ugh. The bane of my existence is sore feet and knees! Shoes are the key. You gotta have super good support. I keep an amazing team around me so I can stay off my feet!

6) What’s one absolutely bonkers idea for an event/festival have you not been able to do in Charlotte — yet?

I have always wanted to transform Tryon St. into a park setting with trees, landscaping, water features, etc. Just imagine if everyone went home on Friday and came back Saturday morning for an event and it was a freaking park! Amazeballs!