A Titanic Undertaking from QC Concerts 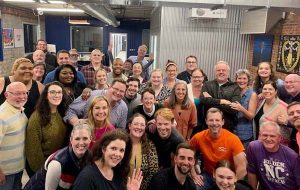 The cast of Titanic The Musical CREDIT: QC Concerts

“The composers’ goal was really to emphasize that these were real people and tell their real stories. It has a lot of emotion and is full of hope in the beginning. And then, you add these layers when people are separated from their families … life can change in an instant, and we have to celebrate those small moments.” – Zack Tarlton, founder of QC Concerts and conductor/director of the upcoming Titanic The Musical

QC Concerts, in just its second season, puts on a massive concert-style production of the 1997 Tony winner for Best Musical

QC Concerts was born out of the pandemic.

Zack Tarlton was going stir crazy at home and, inspired by a New York program called Stars in the House – a live-streamed mini-concert – he began his own live-streaming theatrical project in March 2020. He called it Quarantine Concerts (QC), and its purpose was to bring live theater to anyone trapped at home.

Last year, QC (which now stands for “Queen City” performed its first live show – Tick, Tick Boom – at Free Will Craft + Vine in NoDa. It’s still Tarlton’s favorite show to date. “We performed to a packed, full house,” he said. “It was very special to me.”

Oh, and he changed the words behind QC. Freed from lockdown, QC now stands for Queen City.

Hitting the Road for Season Two

QC Concerts’ entire first season was performed at Free Will. Tarlton decided to hit the road for season two – a season that includes Kinky Boots and Cruel Intentions – which he’s in the midst of managing now. But Tarlton plans to return to Free Will at least once or twice every season.

The format is always the same. The singer/actors, with scripts in hand, perform staged-reading style. Entire shows – both musicals and plays – are performed with dialogue and music but without sets and costumes.

“Every note, every lyric, every line is preserved and delivered without the constraints of sets, costumes, furniture, etc.,” according to the website.

It saves the company money and has been a hit with audiences. Every show has sold out.

It helps that their runs are generally for two performances only, Tarlton said.

A Disaster of Epic Proportions 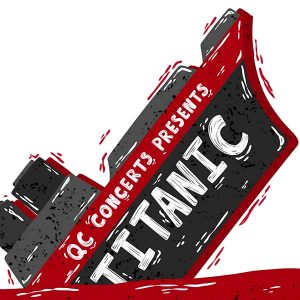 Coming up is Titanic The Musical, which Tarlton will direct and conduct at The Fullwood Theatre in downtown Matthews (100 W. McDowell St.). Seating is reserved, whereas previous shows have been general admission.

The original Broadway musical, directed by Richard Jones and with music and lyrics by Maury Yeston and a book by Peter Stone, opened 25 years ago. It won five Tony Awards that year, including Best Musical. Coincidentally, James Cameron’s Oscar-winning film of the same name opened the same year. [NOTE: Matt Olin, co-founder of Charlotte Is Creative, worked on the original production of Titanic The Musical.]

Unlike the film, though, the musical focuses on the real people who were proud to be on the maiden (and final) voyage of the pride and joy of the White Star Line – the largest ship afloat – and then met with a tragic fate: the deadliest peacetime sinking of a cruise ship in history.

“The composers’ goal was really to emphasize that these were real people and tell their real stories,” Tarlton said.

“It has a lot of emotion and is full of hope in the beginning. And then, you add these layers when people are separated from their families. The themes are still relevant today. No matter your background, your life can change in an instant, and so we have to celebrate those small moments. The musical does a good job of capturing those emotions. I’m excited to bring it to the stage.”

As the passengers arrive, their names – the billionaire John Jacob Astor (played by Austin Dantzler) and his wife, played by Katherine Cherok; Isador Straus (Dennis Delamar), the owner of Macy’s, and his wife, Ida (Christy Hinkelman); et al – and accomplishments are recited by Second Class passenger Alice Beane (Lisa Schacher) in the song First Class Roster.

When I saw the show at the Lunt-Fontanne Theatre on Broadway in 1997, the name of every passenger was displayed in the lobby. It served as a grim reminder of the human toll of the tragedy.

With a 22-piece orchestra and a cast of 45, Titanic The Musical is an ambitious project. But it’s not the most elaborate of the group’s second season. QC Concerts will take on the epic, two-part Angels in America (Millennial Approaches and Perestroika) at CPCC’s new Georgia Tucker Fine Arts Hall next May.

‘Focus on the music’

Tarlton grew up loving music and playing piano. He got involved with Matthews Playhouse as a teen and taught summer camps there. His day job is in finance, but music remains his passion.

“My goal is to really focus on the music,” he said.  “Whether it’s a small show that has just a three- or four-piece rock band, or something like Titanic, which has 22 musicians, or Kinky Boots, with 11 musicians, it’s always about the music.”

For the time being, all the performers are volunteers. But Tarlton has applied for 501(c)(3) status. Once that’s approved and Queen City Concerts becomes a nonprofit, he’ll be able to pay actors – and contributions will be tax-deductible. 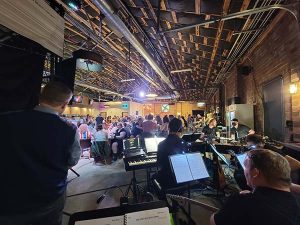 Just because actors/singers volunteer their time doesn’t mean QC Concerts doesn’t attract top-tier talent. Titanic will benefit from some of Charlotte’s most well-known and prolific actors.

The cast includes Dennis Delamar (Isidor Straus), an actor, director and retired public school teacher. Delamar has recently appeared in CPCC’s You Can’t Take It With You (Grandpa Vanderhoff) and Guys and Dolls (Arvide). Last year, he was in OWN’s TV series Delilah, and he’ll appear in two films released in 2023, including Are You There God? It’s Me, Margaret.

Kevin Roberge (Mr. Guggenheim) was most recently seen as Mendel in the concert presentation of Falsettos for Theatre Charlotte.

Jeff Stetson (Thomas Andrews) has previously performed with QC Concerts in Ordinary Days (Jason), and he’s been part of the Charlotte Squawks team that parodies all things Charlotte each year. Titanic is a family affair for Stetson. His wife, Lucia Stetson (also a Charlotte Squawker), is in the orchestra (violin), and their 14-year-old daughter, Isabella, plays Jack Thayer.

Conventional wisdom would say that a pandemic is a terrible time to start any new endeavor. For QC Concerts, though, the timing couldn’t have been more fortuitous.

Tickets range from $15 to $18 and are available at qcconcerts.com.