Presidential campaigns leave nothing to chance. Every aspect is carefully planned and thoughtfully choreographed. When Sen. Kamala Harris recently held a brief “Shop Talk” roundtable in the parking lot next to White’s Barbershop, a long-standing Black-owned business in Raleigh, she was standing in front of a mural by Lord Phly.

It was one small campaign stop for the Democratic vice presidential nominee. It was a giant leap for the street artist who created the mural the Biden/Harris campaign had chosen as their backdrop.

While Phly — a mural painter, curator and creative consultant — hails from Raleigh, he’s been very active in Charlotte lately. For instance, he teamed up with fellow creatives Matthew Clayburn and Jaron Smalls to create new works of art and promote social justice issues in real life and online. A brief tour of his Instagram page, which features a short, inspirational recording every morning, will demonstrate Phly is a man on the move.

But, we managed to slow him down long enough for a Q & A about his work and how it felt for it to be part of a national conversation. The conversation has been lightly edited for brevity and claity.

How long have you been painting murals? 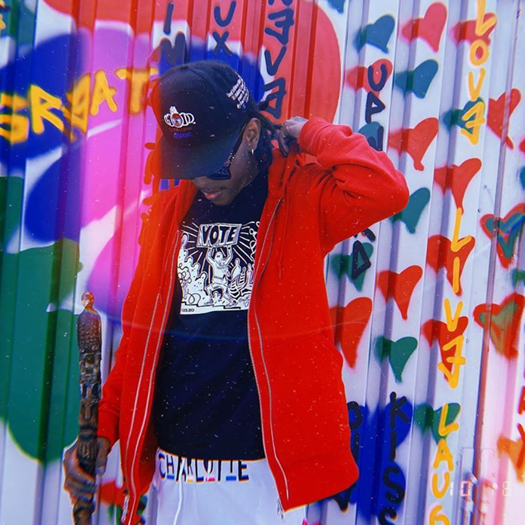 Murals have been a tool [for me] since early 2018. Everything I do is simply a tool to spread the message #nAFbDOPE. (Never Apologize for Being Dope) … murals were a natural progression from the larger canvas work I was doing previously.

How did the mural at White’s Barbershop come together?

The White’s Barbershop mural was a collaboration project with NC Counts (@nccounts) for the 2020 Census. A city and childhood connection, Byron Long, called me with the opportunity to create a graphic that would become a mural … I was asked where I’d like it to be placed, and I chose that specific location because of its historic value, it being Black-Owned and on the south side of town where I grew up.

So personally, it was a no brainer to place it there, knowing it would bring awareness and undeniable energy to an area in need of it. It was placed mid-August, and ever since it’s done that exact thing — doing even more by creating a place now where historical moments and events are now beginning to happen.

What did it mean to you when you saw Kamala Harris speaking in front of your work?

Truthfully, it meant that everything I am, I have been. All that I’ve spoken and stood for in these moments is no longer simply based on the faith I have in myself. It’s now a reality. And, the future VP of America is right there making history where I laid a foundation for it to happen! It let me know to keep going and go even harder, with no fear, no worries, no apologies.

How did you and (Charlotte artist) Matthew Clayburn meet and start working together?

Matthew and I actually met as children. Our mothers are close, yet I’m a little older. So, our true connection happened when we became who we are today.

I’ve been advising Matt from afar, until around June, when he asked me to come to Charlotte to provide the energy I give in person. And, things exploded in the most positive way possible.

How do people get started working with you?

It’s like everything in life. It simply starts with a conversation. My first focus and priority is to inspire people — to simply be open to a conversation. Come in open-minded because, who knows? It could be life-changing.

Lord Phly in the Queen City

Our final question for Lord Phly was what was next for him in Charlotte. We didn’t have to wait long for the answer. 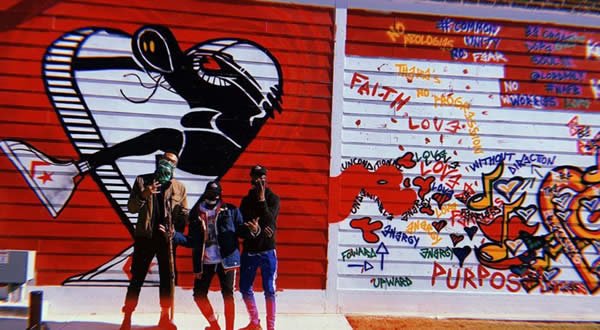 Lord Phly, Matthew and Jaron created a new mural on the side of Community Matters Cafe in partnership with Charlotte Rescue Mission. They invited to the public to wear a mask, take photos with them and make donations of winter clothing, water and nonperishable food.

“I knew immediately that these three men truly believe in helping people and want to give back to the community,” said Sharon Bremer, chief development officer for Charlotte Rescue Mission. “They can do that through art, yes, but it was their idea to have food and clothing drives, as well. So, we created an event around #CommonUnity where everyone can be a part of the giving and watching … there is a lot of polarization in our world today. This is our way of bringing people together in common unity.”

According to the Rescue Mission, this project came together quickly because the team involved gelled over the course of a two-hour lunch. Less than two weeks later, the paintbrushes were out.

In the first phase of their work, the trio of artists painted a mural on the back of Community Matters Cafe, a coffee shop/restaurant next to the Rescue Mission on Caldwell St. They also painted the cafe’s dumpster doors.

Soon, they will begin the process of reimagining the sign on the top of the Rescue Mission that has faded over time. We’ll share more information on the project here in The Biscuit as it becomes available.

A post shared by Charlotte Rescue Mission (@charlotterescuemission) on Oct 13, 2020 at 8:02am PDT