EDITORIAL: A Look Back at June

On more than one occasion this year, I’ve wondered what day it is. Time is so fuzzy these days, it feels nearly irrelevant. But here we are, moving headlong into July. Has it already been six months? Has it only been six months?

Still, I want to take a moment here to acknowledge one of the gifts of June 2020.

It was an amazing honor for Charlotte Is Creative (publisher of The Biscuit) to be a part of the core team – along with Brand The Moth, BLKMRKTCLT and the City of Charlotte – to help make the Black Lives Matter mural happen on Tryon Street in Uptown Charlotte. At a time when change in the world seems to come too slow, the speed at which this project was successfully executed – despite its many moving parts, players and complexity – shows us what’s possible when there’s enough will, passion and creativity behind an idea.

All of the ingredients were there. And then, when the artists themselves arrived on-site the morning of June 9, we felt something new. Creatives coming together to advance change in the world with their talent, their resolve, their genius. Creatives leading the way.

Shortly after the first stroke of paint hit the pavement, I started begging the manager of the building located smack in the middle of the block if she would allow some local photographers and videographers to gain access to the rooftop. With drone operation quite restricted in Uptown, we needed to secure a great vantage point so we could capture the block-long mural in its entirety. Thankfully, she said “yes,” but only three of us could go.

At this time, it was roughly 11:15 a.m. and the mural was far from complete. We made our way out onto the roof, carefully stepping up onto a tiny metal can and holding on for dear life. I peered over the building’s edge, I witnessed a miracle happening 17 stories below. With the skill of the artists behind them, the words “BLACK LIVES MATTER” were beginning to appear down the center of Tryon Street – at the very center of our city. 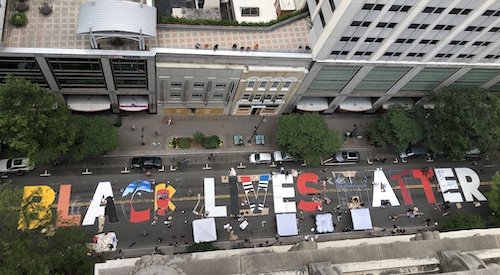 The Mural in Progress

We were at the top of The Johnston Building, at 212 S. Tryon St., which when it opened in 1924 was Charlotte’s tallest building.

Yet here we were in 2020, nearly a century later at the same height – trying to figure out how, as a society, to get higher. Much, much higher.

At ground level, taking in the style and artistry of each emerging letter up close, you begin to realize the true gift that each of these artists was bestowing upon the world. But up here, up in the sky, I was presented with a whole new gift: Perspective.

Despite how high we were, the phrase looked vibrantly, gorgeously and unapologetically huge. Some mantras are meant to be yelled as loudly as possible.

Looking down, I saw the artists hard at work on their letters, and their colors were really beginning to pop. Then, looking up, I saw the looming rain clouds (forecasts called for an 80% chance of rain) beginning to retreat. Something powerful was happening. Our city was changing.

Throughout the day, while the artists were hard at work, we delivered water and food to the artists. We hauled paint cans. We answered questions from reporters and onlookers. We bumped elbows with each other, and expressed our love and admiration of the beauty being created. Then, as the day drew to a close and the mural neared its completion, I begged the building manager one more time for some sweet, sweet rooftop access for the photographers. And again, she said “yes.” 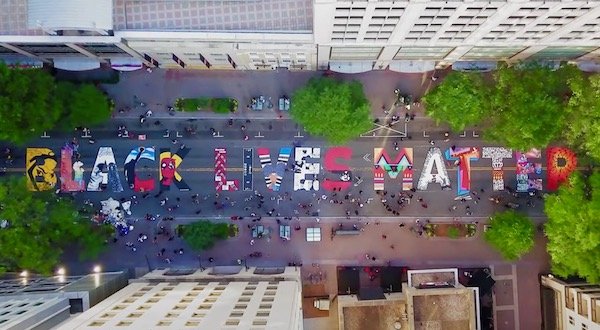 The bird’s eye view of the completed mural was nothing short of breathtaking. Soon, the world was admiring it. (And shortly thereafter, cities from Seattle to Palo Alto to Melbourne and beyond were reaching out for guidance on how to pull something similar off there.)

Who knows? Maybe a mural is the very thing that will get one more citizen to finally stop and contemplate the reality behind “Black Lives Matter.” To really understand why the phrase is so important.

It’s a phrase that must be seen and heard everywhere, until it finally, at long last, permeates our souls, rocks our nation and changes our world.

So thank you, June. July, let’s get to work.