Glenda Bernhardt Cares About the Long-Term Success of Children

“There is a Charlotte that you do not know exists … but, I have also experienced things that would make your heart swell like you wouldn’t believe.”
– Glenda Bernhardt, Freedom School Partners

This summer was not exactly what Glenda Bernhardt had in mind.

Standing in a parking lot in the sweltering heat, she hands educational supplies and other basic resources to families in need at a drive-thru pop-up site at the Baha’i Center in Grier Heights. Everyone is sweating and not just because of the beating sun.

Bernhardt is the still relatively new Chief Executive Officer for Freedom School Partners, a Charlotte-based nonprofit organization that promotes the long-term success of children by preventing summer learning loss through igniting a passion for reading and inspiring a love of learning. Having taken on the role this January, she’d hoped to spend this summer observing the organization’s Freedom Schools first hand.

Instead, COVID-19 forced a complete reimagining of how their programming would be deployed which required a shift to digital engagement at a time when learning disparities are expected to widen.

“By the end of third grade, lower-income children are typically two years behind in reading and math, due in large part to summer learning loss,” Bernhardt said. “Now, just imagine how the disruption of this pandemic is impacting children in our hardest-hit neighborhoods.” 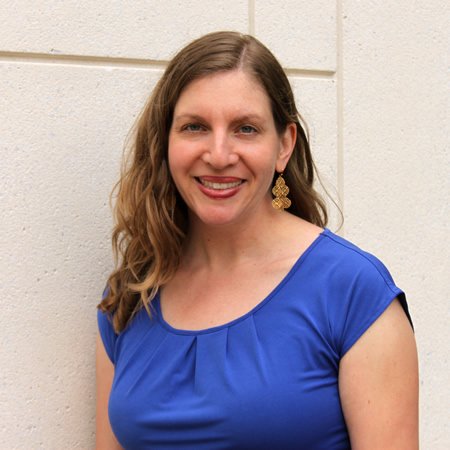 Her first professional role after graduating from Ohio Wesleyan University was as Jewish Student Life Coordinator at Hillel at Washington University in St. Louis. Relocating to a racially-charged city provided a unique perspective that informed the arc of her career.

“I very much had in mind that my life’s work would be focused on building Jewish community through campus work,” Bernhardt noted. “I had the opportunity to co-facilitate a dialogue group for Black women and Jewish women, and that exposed me to another lens on the subject of justice.”

She notes that three Jewish guiding principles have informed the path that has led her to her current role, and the first of these is Tzedek.

“Tzedek is the Hebrew word for charity, but the literal translation is justice,” Bernhardt said. “This guides the underlying reasons for giving to charity – to pursue justice.”

After stops in collegiate administration roles in College Park, Maryland and Richmond, Virginia, Bernhardt relocated with her husband to Charlotte in 2009 just as the Great Recession was setting in.

The job market at the time necessitated a career change that brought her into fundraising and nonprofit administration. Roles in fundraising for the Junior League of Charlotte and Teen Health Connection eventually led to a nearly five-year stint as Executive Director at Temple Israel. 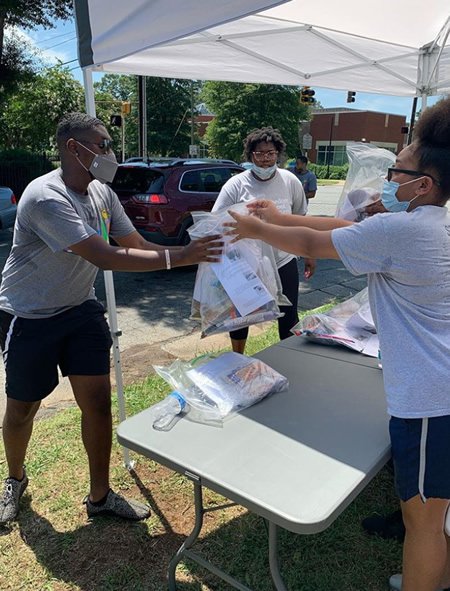 Handing out reading kits at a R.E.S.P.O.N.S.E. site this summer

Freedom Schools are a signature program of the Children’s Defense Fund, a nonprofit founded by civil rights icon Marian Wright Edelman and based in Washington, DC. Organizations like Freedom School Partners sponsor the program in local communities and deploy the model at 181 program sites in nearly 100 cities across the country.

The Freedom Schools construct is rooted in the Mississippi Freedom Summer project of 1964, an effort that increased awareness for the struggle of Black people and helped pass the Civil Rights Act of 1964 and the Voting Rights Act of 1965.

Running a program steeped in the civil rights movement, Bernhardt may be considered a bit of a nontraditional leader.

“I am a white woman who is leading an organization that primarily serves children of color, and our founder was also a white woman,” Bernhardt acknowledges. “I know that from a diversity and inclusion standpoint, my race is challenging, particularly right now.”

Less than six months into her tenure, Bernhardt faced a critical decision following the killing of George Floyd and the national calls for racial justice that followed.

“We had yet to make a statement as an organization and members of my staff team were asking why we hadn’t acted yet,” Bernhardt remembers. “As an organization rooted in the Freedom Summer of 1964, it was a bit of ‘if not now, when?’”

The resulting statement is considered by some to be among the best made by a local nonprofit organization, with powerful phrasing including a vow to “stand with you, as an active participant in the fight against systemic racism, oppression, and injustice… exercising our organizational voice, privilege, and power to demand justice, equity, and access for each child and family we serve.”

Acknowledging that “we’ve got work to do,” Bernhardt noted that exploring the organization’s role in advocacy and systems change is the next horizon as the organization winds down a particularly difficult summer of programming.

“This is who we are,” Bernhardt said. “And it will be ingrained into everything we do going forward.” 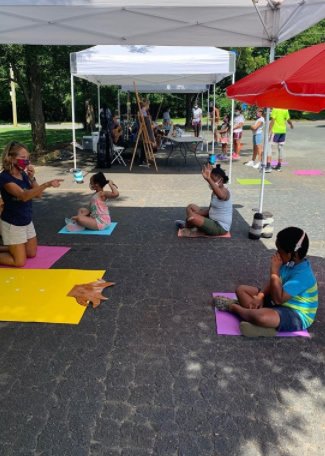 While it may not have been the summer she planned, 2020 has been a test of Bernhardt’s leadership skills. According to Board Chair Geoffrey Mize, a Partner at Ernst & Young LLP, it has not escaped the attention of her board of directors.

“From the onset of COVID-19, our entire Freedom School Partners’ team, under Glenda’s leadership, maintained a courageous, flexible and open approach to the summer,” Mize said. “Our scholars and their families have been and continue to be disproportionately impacted by the crisis and they need our programming now more than ever to help bridge the gap created by many socio-economic factors.”

“Choosing not to respond or step up would have gone against everything Freedom Schools stands for and the courage and spirit of our team led by Glenda has been and continues to be unwavering,” Mize continued. “I am inspired every day by their leadership and courage.”

The Summer’s Over … But, Not the Work

With the summer winding down, Bernhardt can be proud of the impact her organization has made. The organization’s program called R.E.S.P.O.N.S.E. (Reading and Enrichment for Scholars Plus Other Needed Supplies 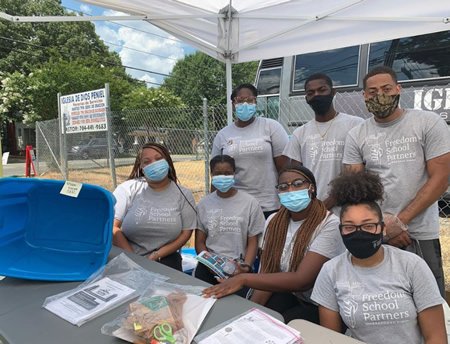 and Essentials) distributed more than 4,500 literacy and enrichment kits to children with limited means plus an additional 1,549 kits shared through other nonprofit partners.

It has also been a summer that has opened her eyes.

“But I have also experienced things that would make your heart swell like you wouldn’t believe,” she continues. “The joy of a child who gets a book, an adult who gets the honor of working with that child.”

Heart-breaking and heart-swelling, all at once, in a single afternoon.

In his “Cares About” series, guest contributor Josh Jacobson highlights staff leaders in Charlotte’s nonprofit sector who are shaking things up and making an impact. Josh is the founder and managing director of Next Stage, a Charlotte company that works with nonprofit organizations to develop game-changing strategies and strengthened operations in service to mission and long-range vision. Read Josh’s last editorial about Pedro Perez of Charlotte Family Housing.