“I’ve seen this movie before,” he said. “I’ve been involved in Black Power and civil rights for a long time. But we’ll see. This time does feel different.” – Henry Rock

Henry Rock has been anticipating this moment – when the white establishment finally understood that Black Lives Matter – for years.

The former advertising executive and civil rights activist has long advocated for young, black men to be thought of as potential entrepreneurs. And he’s worked to create them. He espoused his belief in a 2013 TEDx Talk in Charlotte (see below) and lamented the “bias … whites have of Blacks,” which gets in the way of thinking of young, black men as future leaders.

In 2015, he wrote in an Op-Ed for the Charlotte Observer: “These young men find themselves operating within a structural context that expects less of them … But they continue to demonstrate resilience – not unlike green shoots through concrete.”

He’s still trying to convince the (predominately white) establishment. “Young, black men continue to be demonized, vilified and marginalized,” he said. But the Black Lives Matter marches and protests taking place throughout the world may mean the time has finally come to uplift rather than devalue.

Rock is cautious. “I’ve seen this movie before,” he said. “I’ve been involved in Black Power and civil rights for a long time. But we’ll see. This time does feel different.”

After leaving a successful career that was focused on the Black consumer market, he’s made it his life’s work to help young, black men become a force in the job market. 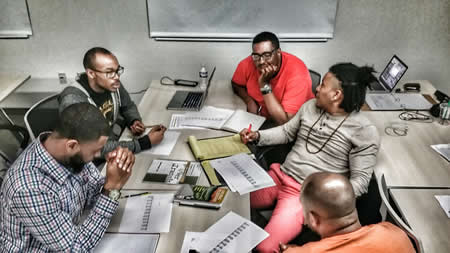 Rock started City Startup Labs in 2014 as a collaboration with the Urban League of Central Carolinas. It’s an academy of instruction, training, mentoring and coaching designed to prepare young men of color to become their own bosses. The first cohort included 25 students engaged in an intensive, 15-week program that stresses character development as much as business fundamentals.

“We’re not looking to pump out junior MBAs,” he said in the TEDx Talk.

‘The goal was to empower these men to improve themselves and then, in turn, improve their communities. The model worked so well that Rock wondered if the same principles and training could work for the formerly incarcerated. (He uses a more uplifting term for that group – “returning citizens.”)

The communities many of these young men come from have experienced, Rock said, “neglect, economic dislocation, crime.” They need to be restored, made whole. So do the returning citizens.

If those men can be trained in finance, operations, marketing and other aspects of running a business, they may be able to reinvigorate the communities they’re returning to.

“If we can help them change their circumstances, they can create economic activity in the places they come from,” Rock said. “They can be at the forefront of change.” 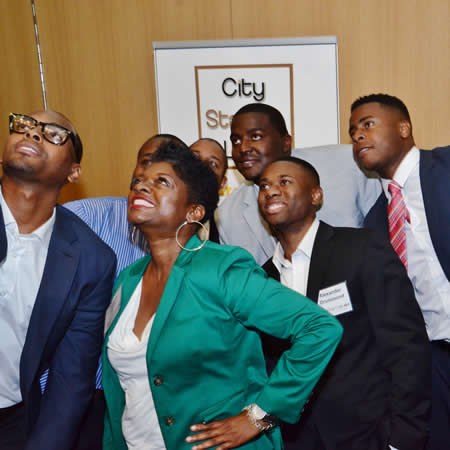 It’s a different narrative from the one we’re used to. Rock knows that. He knows how many barriers stand in the way of young black men.

“They understand how society views them,” he said. “There’s a lot that can get in the way of realizing their dreams.”

Rock doesn’t coddle students, but he does give them the support they need to make it through the program.

“We challenge them,” he said. “But we also offer peer-to-peer support.”

There is no judgment in REEP. Rock doesn’t even ask what offense landed participants in prison. It is a fresh start; there’s no purpose in dwelling on the past.

He piloted the REEP program in 2018-19 and is encouraged by early results. He’s also come to realize that while everyone has some entrepreneurial tendencies, not everyone wants to be his own boss. “We’re teaching skills that can transfer anywhere,” he said. “We’re teaching people to be problem solvers, and that skill can be applied to any job.”

Some REEP participants have gone on to become “solopreneurs.” Others hired a staffer or two and became business owners and employers. Others chose a regular paycheck – and benefits – and took an entry-level job with employers large and small. Rock is adamant about teaching technical skills, noting the digital divide that exists based on what ZIP code you live in.

“We want our folks to be part of the vanguard,” he said of training IT professionals.

He was preparing to launch a tech training program in conjunction with UNC Charlotte when COVID interrupted his plans. It’s on hold for now, but Rock is eager to revisit the program. Rock is used to facing – and beating – challenges. With his media work in the 1980s and ‘90s, he had to, he said, “convince the Cokes and Fords and Procter & Gambles that black consumers wanted to buy their products and were worth marketing to.”

Training formerly incarcerated men for the job market is just one more challenge he’s signed on for. With societal attitudes finally shifting, Rock may be poised to lead a revolution.

DIG IN DEEPER ABOUT CITY STARTUP LABS AND REEP

This story was written in partnership with Wells Fargo Corporate Philanthropy and Community Relations.