This Sunday, Feb. 16, is designated National Innovation Day — a day to celebrate creative ideas that work their way into the real world. And, that got us thinking? What was invented in Charlotte? And, then we thought, “Why don’t we play a round of Queen City Quiz Show about inventions that were born in the Charlotte region with Jason Harper, Page Fehling and Brigida Mack?” You can watch the extremely competitive and often chaotic segment above.

We Charlotteans have a terrible habit of saying, “Nothing ever happened here.” But, that couldn’t be further from the truth. Here are just a smattering of the companies and products whose origin stories started right here in the Queen City. 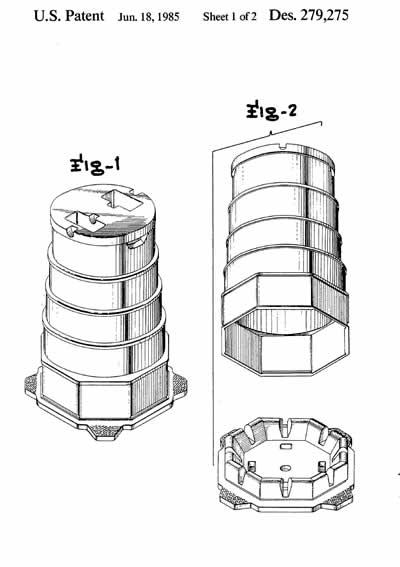 Drawing on the patent for the Traffic Control Drum

Yes. You read that right. The orange construction barrel hails from Charlotte. Milton T. Cory of Gastonia filed the “Traffic Control Drum” with the United States Patent and Trademark Office on 12/5/1983 with Radiator Specialty Company as the assignee. It was published as Patent #: US0D0279275 on June 18, 1985. A momentous day. We have to ask: Why don’t we celebrate Barrel Day? Oh, yeah. Because these days EVERY day is Barrel Day on Charlotte roads.
See the patent here.

“For Health & Pleasure!” That was the first tagline used by Cheerwine in 1920. We can’t really get 100% the health aspect, but this Southern delicacy has brought a lot of pleasure to its fans since it was born in Salisbury, NC in 1917. L.D. Peeler added extra cherry flavoring to his soft drinks in order to disguise the effects of a sugar shortage brought on by World War I rationing.
Sip a little of their story.

The Biscuit’s love for Bojangles‘ is well-documented. Let’s just say, we’re glad that it’s been Bo-Time in the QC since the first location opened in the South End area in 1977.
Take a bite out of Bojangles’ history.

Independence from England AKA “The Meck Dec” 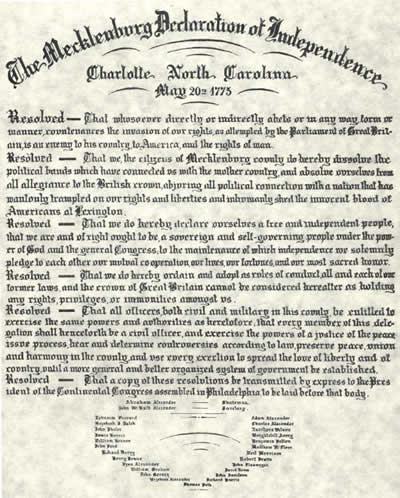 The next time you agree to bring healthy snacks (carrots, really?!?!?!) to the soccer game, bring cupcakes for the end-of-year party or agree to head up “diaper disposal” for your church’s child care room with Sign-Up Genius, put your hand on your heart. Your online obligation was recorded by a tech company assembled right here in Crown Town.
Click here and feel like a history Genius!

What do you do when you get stuck with 500 pounds of peanuts? Roast them and sell them … of course. That’s exactly what Philip Lance, a food broker, and his son-in-law did at their home, located on South Boulevard. Three years later, Lance’s wife and daughter, had the idea of sandwiching peanut butter between two crackers. Add in thousands of hungry soldiers stationed at Camp Greene … and a snack classic, the peanut butter cracker, exploded on the scene.
Crack into the history (even if you have a peanut allergy).

How do you build a new stadium? There are many new ways to skin that cat (pun intended), but one is to sell Personal Seat Licenses (PSLs), a process engineered by Max Muhleman for both the Charlotte Hornets and the Carolina Panthers.
Invest a little time in the story.