Here’s how the comedic minds behind the long-running Charlotte Squawks describe themselves on their Instagram page: “A show poking fun at Charlotte, pop culture & politics with satire and musical parodies running Aug. 18 – Sept. 12, 2021.”

That’s like the long-running Saturday Night Live describing itself as a “A show poking fun at America, pop culture & politics with satire and musical parodies.”

Both are true, but the plain-vanilla description doesn’t hint at the no-holds-barred humor and irreverence at the heart of the shows.

We chatted with Squawks’ co-creator (along with WFAE’s Mike Collins) Brian Kahn, lawyer by day/comedy writer by night, about the history of the show and what audiences can expect this year.

What sketches are coming back this year? (I still think there’s more fun to be made of Morris Jenkins! And even though Jennifer Roberts is no longer in office, I could watch the commercial for the Jennifer Roberts Fashion Collection on repeat forever.)

We are bringing back On Nextdoor (with a few fun new lyrical and visual tweaks) because it was so well-received during the last show. Also, we are doing the annual You Had A Bad Day parody – with all new targets, of course. And that’s it. So much has happened in the past two-plus years that we couldn’t fit in all the new material let alone bring back much old stuff! 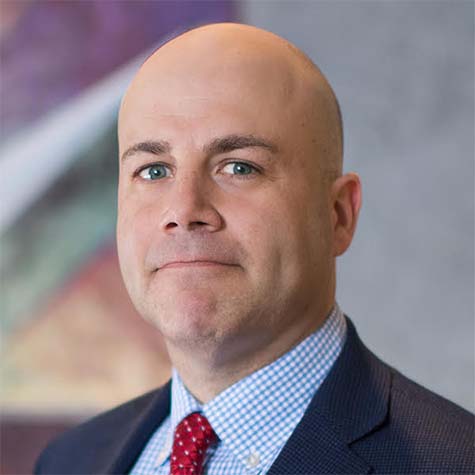 How much material is new?

It’s hard to give an exact percentage, but I would say 99.7% (which is incidentally the radio station I listen to instead of Charlotte Talks when Mike (Collins) has a repeat show on. Just kidding – nobody listens to the radio anymore. (Editor’s Note: He’s kidding about that, too. Collins is the host of “Charlotte Talks” on WFAE, and everyone listens to him.)

How often are you thinking about Squawks? Because it seems like it must be on your mind constantly throughout the year. There’ll be incidents I completely forgot about that get a nod or a full skit in your show.

Again, 99.7% of the time. Actually, there was a lot of material that we had planned for the show last summer (16 Scandals) that ended up being too stale, so we had to scrap it. In fact, only two numbers survived from our last planned show, both with substantial revisions.

Can you share something that most people may have forgotten about (it has been two years since the last Squawks) that we’ll be reminded of through song, dance or the news segments?

Well, do you remember running out of toilet paper? Other than pandemic-related stuff, we’ve tried to keep it really current. I think the farthest back we go is Cal Cunningham’s sext scandal last fall – unless you count our tribute to Luke Kuechly, since we haven’t had a show since his retirement.

When a politician gets caught doing something stupid/illegal, do you and Mike Collins text each other: JACKPOT! or something similar? I imagine the day Patrick Cannon was arrested (and the hilarious details of the FBI sting were made public) was a pretty good day for you and Mike.

Pretty much. Although it’s kinda weird that whenever something horrible happens in Charlotte, I get a bunch of texts and emails saying “Aren’t you excited!?!” 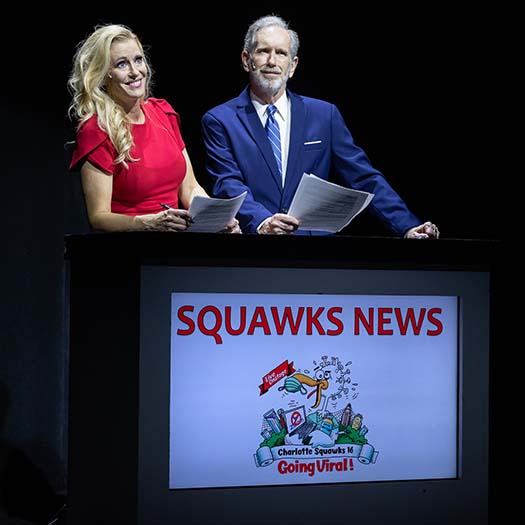 Who are the other writers in addition to you and Mike?

Matt (Olin) and Tim (Miner) have helped out with generating ideas and writing for the videos the last two years. I really love collaborating with them. John Merrick and Jay Thomas do most of the video shooting and editing, and their creativity is pretty amazing as well.

We also get some fantastic ideas from the cast and crew – Lucia Stetson and Johanna Jowett, in particular. Other than that, it’s Mike writing the monologues and me writing the songs and finding the slides. It’s a lot of work, but I love doing it.

While the show is known for being hilarious, there are topics that just can’t be played for laughs. Your This Land is Parkland (after the mass shootings at Marjory Stoneman Douglas High School in Parkland, Florida) was one of the most poignant moments I can recall from any theater experience.

Thank you so much. We are not doing Parkland this year. We are doing a serious number, though -– it is a new take on Gil Scott-Heron’s The Revolution Will Not Be Televised, and it’s about the racial justice movement we’ve seen in the wake of George Floyd’s murder. It’s an incredibly important topic that we felt needed to be addressed and could not be done through humor. 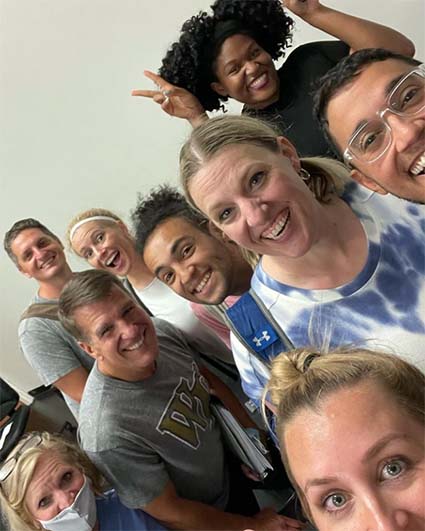 The Squawk cast at rehersal.

COVID prevented the show from going on last year when there were sooo many topics you could’ve covered — most of them having to do with the presidential election. Do you cover that in this year’s show?

Of course! I mean, there are still some people that think that other guy won, right? We might have a song medley about those folks based on the Broadway show Avenue Q.

It’s so hard to pick just one. Two that are definitely at the top are the Morris Jenkins Dirty Dancing number and Circle of Bikes, a parody of Circle of Life from The Lion King.

How did you spend your spare time before you developed the idea for Squawks?

Well, that was 20 years and four kids ago, so I’m not sure I actually remember. I guess I probably had a social life? I used to draw political cartoons and was in an a cappella group and musical theater in college … so you can imagine I have always been super cool.

I’ve seen the cameo appearances your sons have made in Squawks short films. They are probably teenagers by now. Do they think you’re as funny as the rest of Charlotte does? Do you think any of them will be comedy writers/comedians?

The triplets are 14, and their little brother is 10. They definitely do not think I’m funny. They seem to favor fart jokes and, sadly, that’s a very limited part of Squawks. I would love for them to write comedy if that’s what they want to do. I would like them to write complete sentences with properly conjugated verbs first, though.

Do any of your law clients ever hire you because they like your Squawks material?

Nobody’s ever admitted this to me. I guess some clients could see it as a sign that I can come up with creative solutions or be good with a jury? Of course, my material might also be a reason why the My Pillow guy won’t hire me. Oh, well.

What else do you want Biscuit readers to know about you, the cast and crew and/or this year’s show?

We are committed to keeping the audience safe. We are following all local guidelines including the mask mandate. In addition, the facility has state-of-the-art air-replacement filtration and all cast, crew and staff are fully vaccinated.

Also, we’ve got some amazing new cast members, as well as many old favorites coming back. Opening weekend went incredibly well and we’ve gotten overwhelmingly positive reviews. It feels great to be back in the theater, and we’d love for folks to come join us!