Whoa! Is your head spinning, or is it just us? Either we’re on a wicked sugar high from all the Halloween candy we’ve “pre-eaten,” or there’s a ton of creative news floating in the ether.

It’s both. A) We’ve worked our way through all the Kit-Kats, Twix and Butterfingers, and now all that’s left for the kids are Zagnuts and Oh, Henry’s. B) See below for some quick hits on creative developments at work in the Queen City. 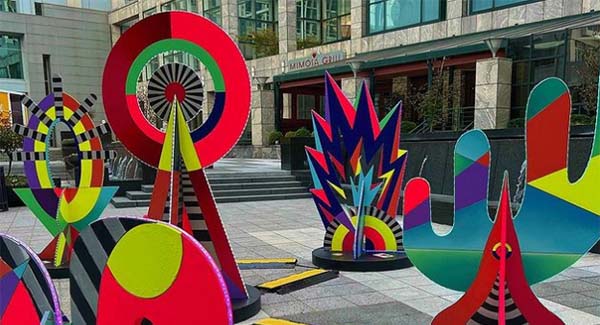 This week, KiiK Create, a team of married artists who moved to Charlotte last year, installed painted sculptures they call “Energy Field Tokens” at the Wells Fargo Plaza on the 300 block of S. Tryon Street. They will be up through Thanksgiving. They are accompanied by the giant camera, “Project 1839” by Aguinaldo Santos, also installed on the plaza.⁣

Explore the Present and Future of the Albemarle Rd. Corridor

The community celebration planned for Oct. 28 at the Four Seasons Shopping Center on Albemarle Road has been postponed until Monday, Nov. 1 from 4 to 6 p.m. Visitors can learn about future plans on the corridor and (more importantly) share their perspective with the City of Charlotte’s Corridors of Opportunity team.

Artist Rosalia Torres-Weiner of Red Calaca Studio will be on hand building a Day of the Dead ofrenda – a collection of objects placed on a ritual display during traditional Día de Muertos celebrations – and leading hands-on art activities for kids of all ages.

Three More Days to Enjoy Of Earth and Sky

If you haven’t seen Of Earth and Sky, a collection of larger-than-life poetry installed in locations across uptown Charlotte, you have until Oct. 31 to get out and see them. A team from Blumenthal Arts identified snippets of poems from more than 200 local submissions and workshops earlier this year.

Celebrate a Creative Charlotte Leader Under the Age of 20

Do you know a creative, community-minded Charlottean under the age of 20? Of course you do. ⁣Through Oct. 31, you can nominate 14- to 19-year-old student leaders in the Queen City for a 20 Under 20 award. This program, which received a $1,000 Bear HUG powered by the LendingTree Foundation earlier this year, was created by My Dean’s List. Nominees will be honored at a special celebration in December and will be evaluated for their: 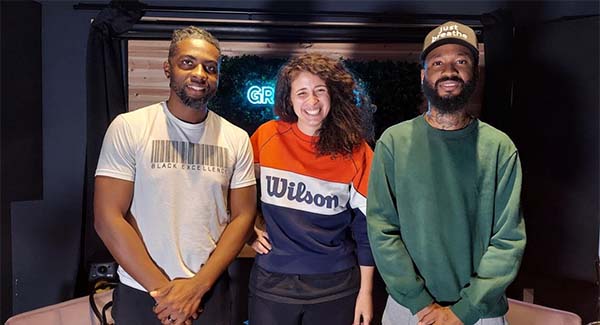 WFAE & Lute Team Up for the 100th Episode of Amplifier

Since debuting in 2018, WFAE’s Amplifier Podcast, hosted by Joni Deutsch, has produced 100 episodes highlighting Charlotte music and the people who make it. On a special 100th show recorded at Jason Jet’s GrindHaus Studios, Deutsch spoke with breakout Charlotte rapper Lute about his career, from his 2021 self-published mix tape to his recent full-length album and Grammy-nominated collaboration with DaBaby and Kendrick Lamar. 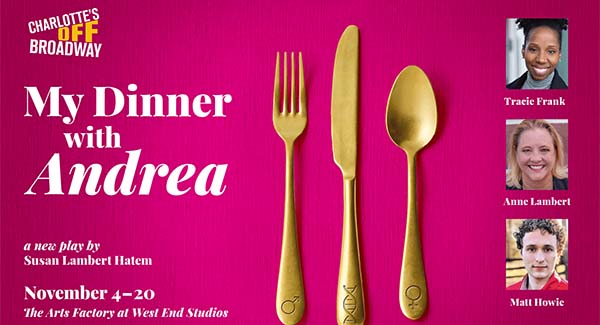 Charlotte’s Off-Broadway Brings Up the Lights

It’s a busy time for Charlotte’s Off-Broadway and producer, Anne Lambert. The theater group recently joined the growing community at the Visual and Performing Arts (VAPA) in the former Hal Marshall Center uptown. And, with help from a Bear HUG powered by the LendingTree Foundation, they are debuting a new play by Susan Lambert Hatem, My Dinner with Andrea, at the Arts Factory black box theater Nov. 4 – 20. The work was a 2021 finalist for Ashland New Play Festival.

RENT Stops in Charlotte for a Bow on their Farewell Tour

They still might not be sure how they’re gonna pay last year’s rent, but — for now — we’re focused on the present. The Tony Award and Pulitzer Prize-winning musical, RENT, is temporarily relocating to Charlotte as part of its farewell tour. After 1,005 performances in 237 cities in five countries, RENT will move in for a short stay at the Belk Theater Nov. 9-14. We’ll have a look behind the scenes of this 25th anniversary show in the next batch, but don’t wait to get your tickets. 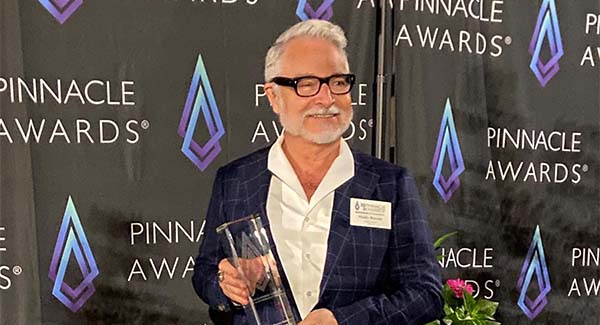 Wesley Mancini at the 2021 Pinnacle Awards

Award-winning fabric designer Wesley Mancini — featured in The Biscuit last year — was honored at the 25th anniversary of the International Society of Furniture Designers (ISFD) Pinnacle Awards on Oct. 19. He was the first non-furniture designer ever to win an award for fabric design. 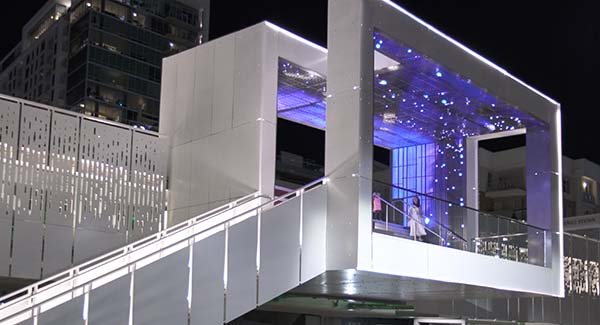 Skyline at the Convention Center expansion.

A New Skyline Within the Skyline

Last week, the Arts & Science Council (ASC) unveiled Skyline, a new work of public art, created by Los Angeles-based artist Susan Narduli, and permanently installed as part of the Charlotte Convention Center’s $126.9 million expansion. The piece features approximately 1 million pixels lining the walls and ceiling of a bridge-viewing platform. These can be programmed to create an immersive light experience surrounding visits on the platform.

Skyline will feature a 10-minute show that will play hourly from 7 to 10 p.m. each day. Skyline was funded through the City of Charlotte’s 1 percent for the Arts Ordinance, managed by the ASC.

Join the ‘Zine Scene this Saturday

Admission is free to the 2021 Queen City ‘Zine Fest at Goodyear Arts at Camp North End. From 11 a.m. to 5 p.m., guests can explore the work of more than 40 creative working zines (hand-made publications), illustration, comics and paper-based media from North and South Carolina.