The Queen City stands in for The Big Apple

“There is so much art in our city, and it’s such a gift to us. So often, we drive right by it. But if you can take the time to slow down and really notice it, you’ll see it’s amazing.” – Brooke Brown

Brooke Brown was supposed to be walking around Manhattan last weekend. Instead, she created her own art walk right here at home.

In a different world – the one we lived in just three months ago – Brooke Brown would’ve been in Manhattan last weekend. She, her sisters and two girlfriends were to have been part of the Great Saunter NYC, a 32-mile urban hike that allows participants an unusually leisurely pace (by New York standards) to take in the city’s urban parks, greenways and shoreline.

The tagline for Shorewalkers NYC, the organization that sponsors the annual walk, is “Seeing the world at 3 miles per hour.” Even with a crowded field (more than 1,500 walkers had registered), every participant gets an unfettered close-up of a city that’s often too noisy, crowded and chaotic to allow anyone to slow down and listen.

Brown, a professional photographer and mom to three teenage boys, decided to take her own 32-mile hike around Charlotte. With no shoreline to take in and few urban parks to enjoy, Brown’s urban hike had a different focus.

“I get so excited when I see a new mural posted on Instagram,” she said. “I always save them in a folder, thinking: I want to see that in person someday. I’ve been saving these for six months to a year.”

A 32-Mile Trek Around the Queen City … Camera in Hand

Brown took off with her camera “and a little piece of paper with addresses written on it.” She couldn’t find all the murals she was looking for. But there were plenty (close to 100) not on her list that were happy discoveries.

One mural she was disappointed not to find features a “huge Purell bottle,” she said. “It looks gorgeous and so realistic.” Hand sanitizer is having a moment.

The peripatetic art seeker had four starting points. She parked in Plaza-Midwood and walked to the Metropolitan and back for her first 10 miles. Then, she drove to NoDa, parked and took in another 5 miles and next did the same in South End.

She drove back to her family’s SouthPark area home and walked the last 12 miles. “I was determined to walk 32 miles,” she said. She was joined by her sister for a few miles and a friend for another few. But for the most part, it was just one determined woman, her address list and iPhone X.

And what did she discover? “Joy,” she said. “There is so much art in our city, and it’s such a gift to us. So often, we drive right by it. But if you can take the time to slow down and really notice it, you’ll see it’s amazing.”

She can’t pick a favorite mural. (“They were all my favorites!”) But, she was especially touched by murals that offered messages of hope. “Be kind,” “Be a light” and “Work together” were among the messages she saw.

Then there were the murals that made her nostalgic. “Rocky and Bullwinkle are right next to Boris & Natasha in Plaza-Midwood,” she said. “I never even knew. And there’s a doughnut mural in South End at the Krispy Kreme corporate office with a message that says ‘Treat yo’self.’”

At nearly very stop, Brown was taken aback by the scale of the art. “It’s breath-taking and mind-blowing,” she said. “It made me want to know more. How did the artist begin? What was the thought behind it?” 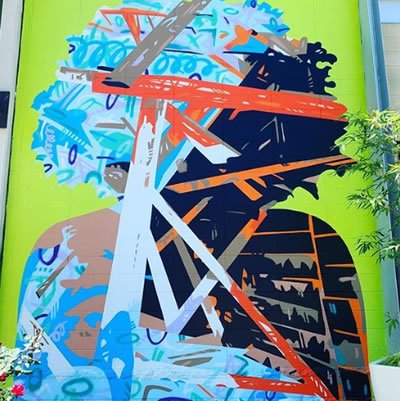 She was especially charmed by hard-to-find murals. “Some murals are tucked back in out-of-the-way places,” she said. “It’s like a little secret you just come upon. There was one I nearly missed. It’s inside a parking deck near The Metropolitan. Against a black wall are two crowns – one for a king and one for a queen. It’s like an invitation to interact with it – for two people to stand underneath each crown and have their picture made.”

It’s something you could easily miss it if you were traveling more than 3 miles per hour.

Brown took a photo of each mural and shared several on Facebook with this message: “The plan was to walk through Plaza Midwood, NoDa, Midtown and South End and take in as much graffiti/street art as possible. #1 takeaway: There is so much talent and inspiration in this city! It felt like there was fun & creative and beautiful art everywhere. (Wish I knew all the artists’ names so I could tag them and thank them) … If you need an activity, walk our city and enjoy the view!”

Thankful for Art … and Artists

At the end of the eight-hour day, Brown felt something that’s in short supply these days. “I was encouraged,” she said. She enjoyed her tour so much that she took her sons the next weekend – but they drove the route Brown had walked. And stopped for ice cream.

“I was thankful for these artists – there’s so much talent in this city – and thankful for the building owners who let them do it. I hope that continues. And in this time when it’s so easy for the focus to be on what’s scary and what’s unknown, I felt thankful to have seen so much goodness. It felt like a blessing.” 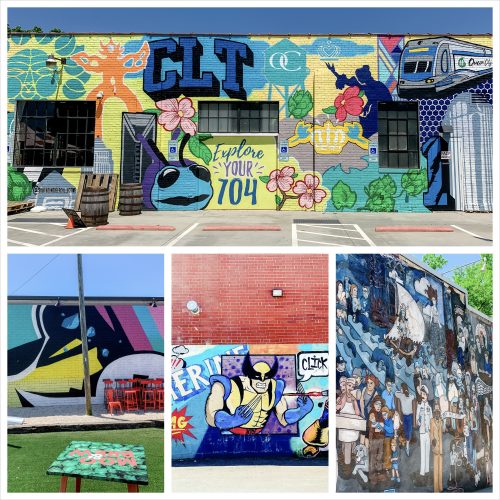 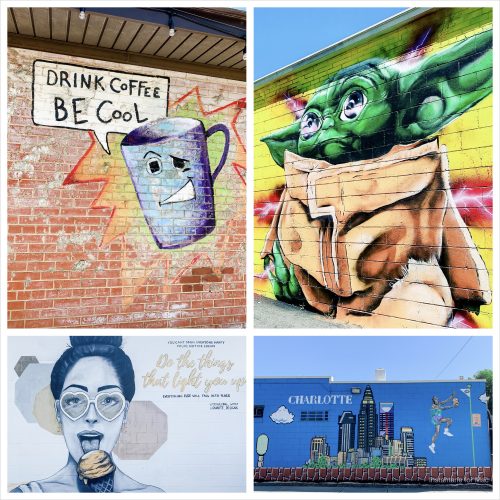 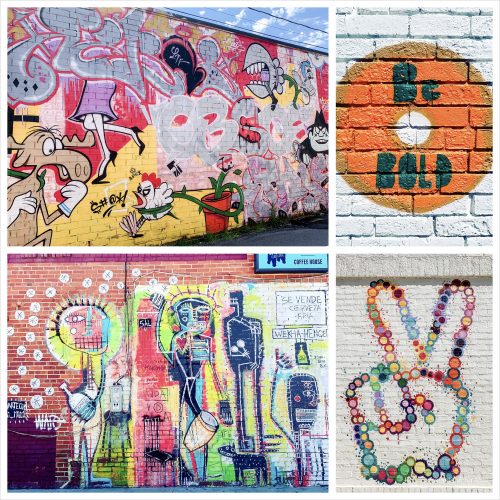 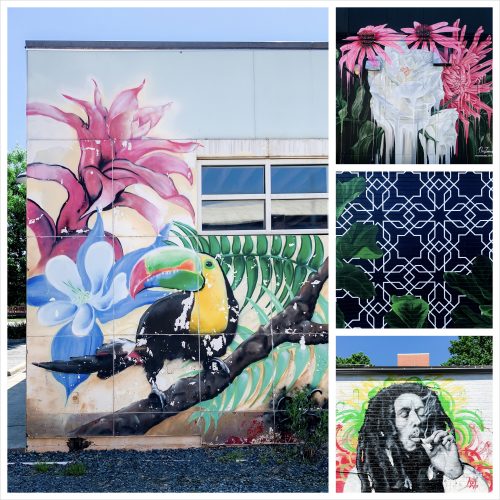 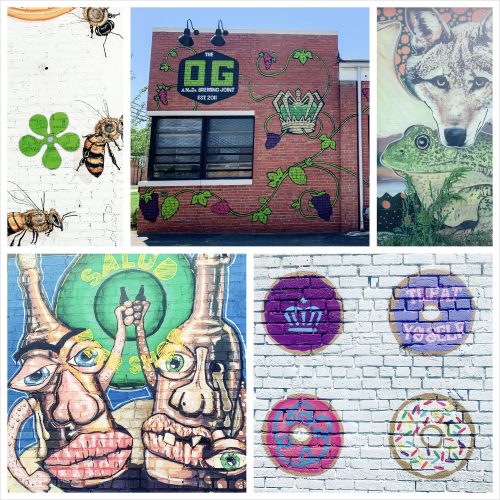 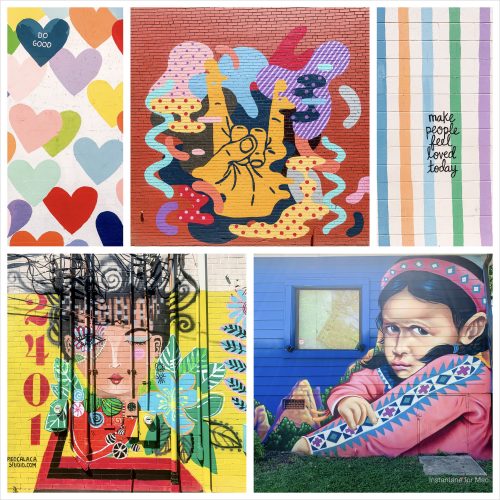 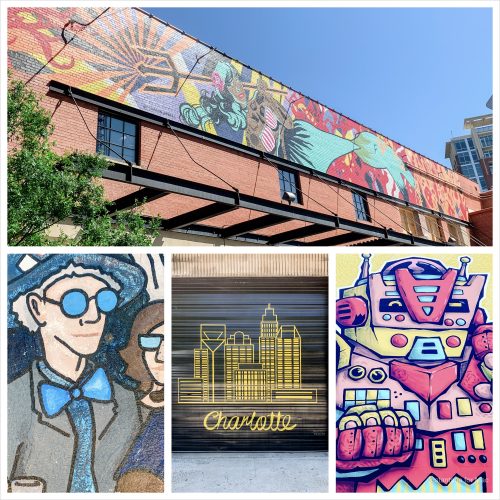 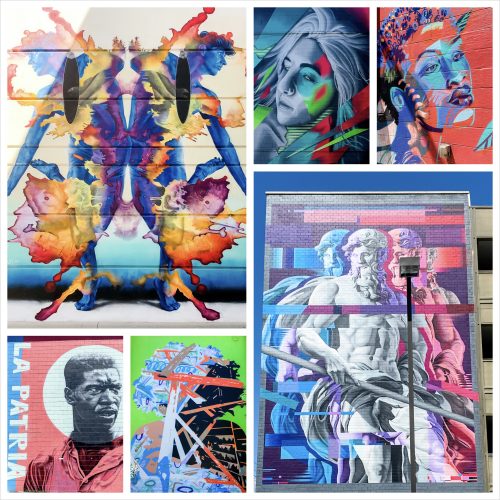 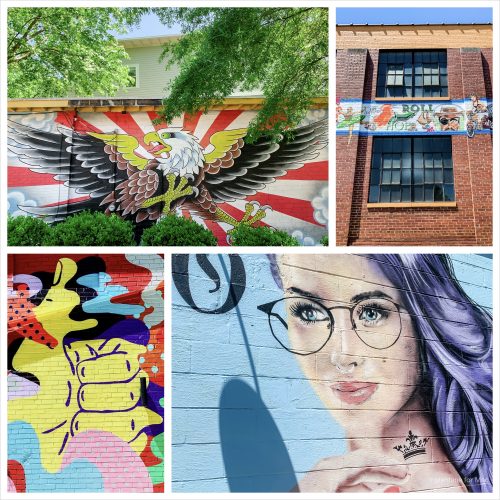 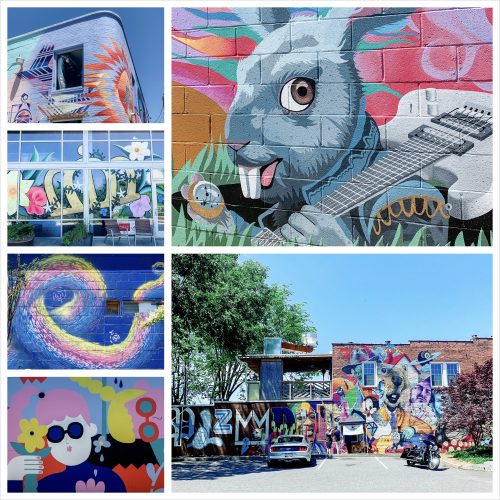 Follow muralist, illustrator and Queens University professor Mike Wirth on Instagram at @mikewirth. Wirth has offered talks at Levine Museum of the New South on “Decoding Charlotte Murals” and may offer them again, once stay-at-home measures are lifted.