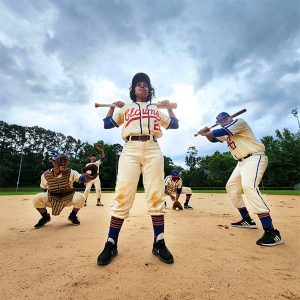 History had almost forgotten the first woman to play professional baseball. I mean, have you ever heard of Marcenia “Toni” Stone? I hadn’t.

But then, Martha Ackmann wrote the book, Curveball: The Remarkable Story of Toni Stone. Lydia R. Diamond adapted it into the play, Toni Stone. The Wall Street Journal named the “Best New Play” of 2019. And now, Three Bone Theatre has brought the triumphant story to the Arts Factory at West End Studios in a Charlotte premiere.

Toni (who lived from 1921 to 1996) played second base for the Negro League’s Indianapolis Clowns beginning in 1953. Being a double minority, she had to face sexism and racism. And, at least according to the play, she did it with grace and a single-minded devotion to the game she loved.

Even if you don’t know beans about baseball, you can still appreciate Toni Stone. The title character gives us a primer early in the show for those of us (like me) who’ve managed not to take an interest in America’s pastime. The focus is more on storytelling and less on stats.

“NOT A BIG TALKER,” BUT IMPORTANT THINGS TO SAY

“I’m not a big talker,” Toni says at the outset. “I talk a lot, but I don’t talk big. I have pride, but I wouldn’t say I’m proud. I don’t put more in a story than is really there. And I don’t like it when other people do. So, don’t think I’m bragging when I tell you that I do the things I do well, better’n anybody. I am prone to ramblin’. Never could tell a story from beginning to end all nice and neat. My brain don’t work that way.”

From there, the comedic drama plays out in the form of memories narrated by Stone, who’s adorably portrayed by Nasha Shandri. The play is a showcase for her talents. The story is non-linear – Toni warned us she had trouble telling stories from beginning to end – although it’s never hard to know where we are in the journey.

Toni breaks the fourth wall. At several points, she asks the audience: “Did I tell you about …?” She also lets us know, for instance, when she’s playing herself as a child. (She wears her baseball uniform throughout the play, even when she’s a youngster.)

One note about those baseball uniforms: Three Bone rented authentic, recreated wool baseball uniforms of that time period from Milwaukee Rep Theatre. They must be hot to wear under the stage lights, but they do lend an air of realism to the proceedings.

Although Toni’s a tomboy through and through – even as an adult – she has a distinguished suitor, Alberga (a commanding Keith Logan), who eventually becomes her husband. She’s also taken under the wing of a street-smart madame, Millie, who doles out sage advice whether Toni asks for it or not. 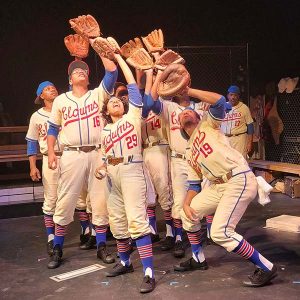 While an all-female design team brought the play to life, all the actors, except for Shandri, are male. Even Millie, the affable, good-hearted prostitute, is played to great comedic effect by Robert Rankin.

The eight actors who portray Toni’s teammates do double duty in playing other parts, as well. Just by adding a hat or a priest’s collar and adopting a different accent or higher pitch, the actors take on new roles right before our eyes.

“Reaching” is the theme here and an oft-repeated word in the play. Toni reaches for balls and reaches for new heights on behalf of her gender. She’s humble and nonchalant in achieving her improbable dream of playing pro baseball.

Toni is naïve and takes everything literally. She doesn’t get innuendo. She doesn’t even understand when Alberga is trying to woo her. Both as a child and as an adult, all she wants to do is play and talk baseball. She collects baseball cards, can recite stats from memory. Everything else – including romance – takes a backseat.

Audiences have a close-up view of the action. We sit on three sides around a center stage that becomes a baseball diamond. A chain link fence on one side is a dugout backdrop. Even when Toni’s giving a soliloquy in the middle of the stage, her teammates are often winding up and engaging in batting practice behind her. Three Bone engaged a real-life baseball coach – a retired Charlotte-Mecklenburg coach and PE teacher – to help the actors legitimately look the part.

While Toni Stone is not a musical, there are a couple of big musical numbers – that use bats as props – that are absolutely jubilant and worth the price of admission. There’s jumping, tumbling, break dancing – a decidedly modern segment of an otherwise period piece.

The show is directed by Dr. Corlis Hayes, who returns to Three Bone Theatre after directing King Liz in 2018. Hayes is an instructor at Central Piedmont Community College and formerly led the drama department at Johnson C. Smith University.

Her extensive directing credits includes A Soldier’s Play, Fences, The Miracle Worker, The Wiz, Joe Turner’s Come and Gone, For Colored Girls Who Have Considered Suicide /When The Rainbow is Enuf and more. She’s also a faculty member of the nonprofit The Theatre Gap Initiative that helps students use a gap year to prepare for auditions for BFA programs, under the leadership of Corey Mitchell. 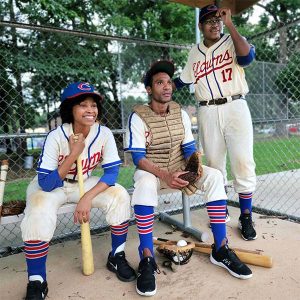 At the final dress rehearsal, Three Bone leaders announced the lineup for their next season – the group’s 11th. “The Hunt for the American Dream” season includes:

The theater group continues to tell the stories of often overlooked populations and the discrimination many still face. Learn more and purchase season flex passes at threebonetheatre.com.

GET THOSE TICKETS. (PEANUTS & CRACKERJACK OPTIONAL.)

Toni Stone is currently playing at the JCSU Arts Factory at West End Studios (1545 W. Trade Street). The next shows are Aug. 25-27 and Sept. 1-4. Showtimes are at 8 p.m. on Thursdays, Fridays and Saturdays and 2 p.m. on Sundays. Tickets range from $10 (for students) to $25. Learn more and buy tickets at threebonetheatre.com.