EDITORIAL: What if Trade & Tryon Was for People, Not Cars?

This is first of a series of new imaginative editorials by Clayton Sealey of CLT Development. 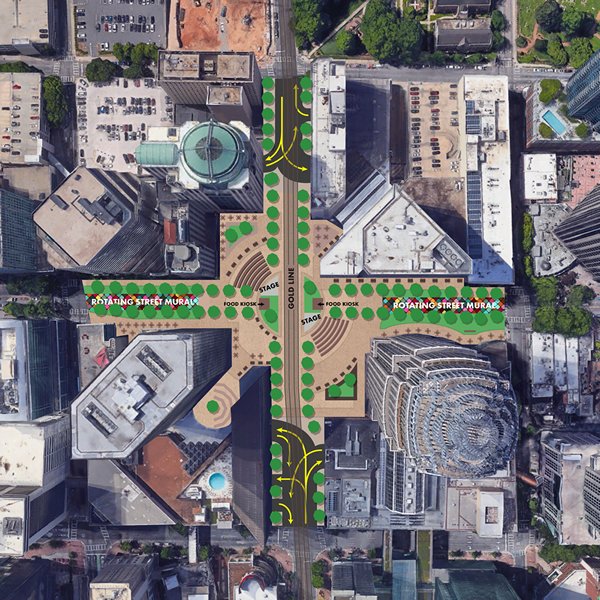 Carefree people amble about, pausing briefly to consider what sight, sound, taste or smell they’d like to experience …

Every great city has that one place you go home and tell your friends and family about. Great places are for sensory satiation, they offer a boundless assortment of engagement all wrapped up in an intimate location.

What is Charlotte’s place?

Sadly, it does not yet exist.

Placemaking is about identifying areas with the potential to be exceptional. What better place to create something special, than at the historic crossroads of Charlotte — The Square at Trade & Tryon?

Remove Cars, and Let it Flourish 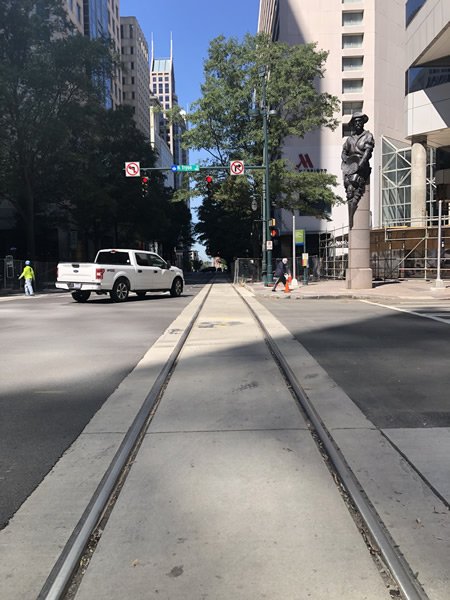 What if the Gold Life ran down a pedestrian intersection, rather than an auto intersection?

Today, the intersection of Trade and Tryon is among the most recognizable and symbolic features in Charlotte.

It’s the urban center of uptown, but until fairly recently it had been mostly-empty, mural-adorned lobbies, featureless plazas and reflective glass windows. Over the past few years, that has begun to change, with 2 of the 4 corner buildings receiving street-level makeovers.

Cities around the world have been closing streets to automobiles, returning that asphalt back to people, and delivering experiences that enrich visitors and the community alike.

Currently, the closest we have is the “Black Lives Matter” mural between 3rd and 4th uptown. This pilot project has shined a light on what we can do if we put our mind to it. The nearly block-long mural has been visited by thousands and would have an even greater impact if Uptown’s circumstances improved.

Covid-19 has ground a thriving center city of 120,000 workers and 30,000 residents to a virtual halt. There are no more lunch rushes, no more people taking conference calls from the Green and the vibrancy has seemingly been sucked out of Uptown.

The current state is temporary, people will return, so let’s start planning for the future. By closing this intersection to cars you can plug in spaces for gathering, seating, exercising, relaxing, dining, and entertainment. Places for permanent art displays, interaction, street murals, outdoor classrooms, and places to learn and play.

What About Cars, Traffic and Parking? 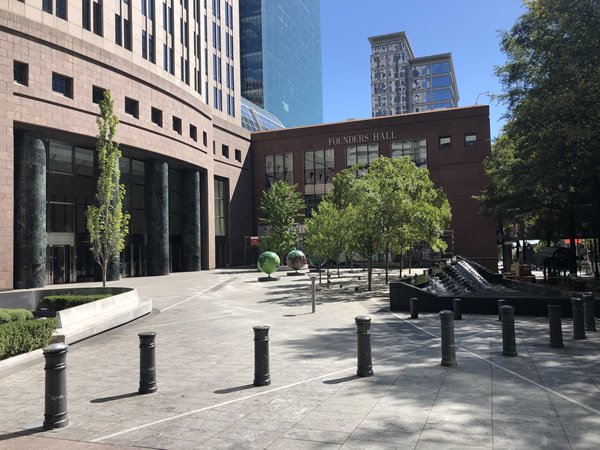 Would closing Trade and Tryon to traffic bring new life and activation to the four open plazas already surrounding the Square?

So what happens when we close this intersection to cars? For one we will have to reconsider its traffic patterns. The automobile traffic would have to be diverted to 4th, 5th, College and Church, and clear directional/wayfinding signage would have to be added. As far as parking access goes, Tryon St. is in a unique position, there are almost no vehicle exit/entrances for the road’s entire uptown length. Trade has two important entrances for the Omni and the Marriott, so you would have to add in limited access for those two hotels.

In 2022 the extension of the CityLynx Gold Line will cross through Trade and Tryon, marking big progress toward making the intersection more pedestrian-friendly. Designing the space carefully to safely integrate with the train’s right-of-way will be essential. To do this I would create functional barriers like permanent stages and raised planters, with carefully placed and marked pedestrian crossings.

Take those items into consideration and plug-in interesting experiences and the sky’s the limit. Next time you are standing at Trade and Tryon, look up, look around, imagine how great this space could be. 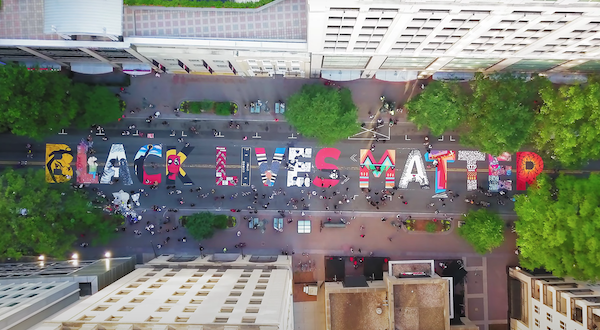 EDITOR’S NOTE: As we were preparing this special editorial with CLTDevelopment’s Clayton Sealey, the City of Charlotte announced on Oct. 1 that it has extended the trial period of the “pedestrian plaza” on the 200 block of S. Tryon St., the site of the “Black Lives Matter” mural.

On Sept. 30, Charlotte Center City Partners announced programs with the City of Charlotte and Blumenthal Performing Arts to program blocks on Tryon Street with music, dining areas, interactive art and more in the Fourth Quarter of 2020.

Clayton Sealey May Be a Dreamer. But, He’s Not the Only One

Clayton’s in good company. Closing The Square to traffic is an idea that’s been discussed for decades. But, it’s a topic that never grows old. In 2010, architect Tom Low and his team released a video envisioning many ways to repair urban sprawl, including closing off The Square. You can see his ideas at the 1:00 mark.