This Friday, July 12 at 7pm, our pals, John Short and Miller Yoho of The Charlotte Podcast fellow members of the Queen City Podcast Network — are busting out of the solitary soundbooth for a live, public recording at Camp North End. They’ll be joined by special guests Morgan Fogarty of WCCB; Joe Bruno of WSOC; Ryan Pitkin of Queen City Nerve; and Jemayne Levar King of Sole Food Brand. And, you’re invited to watch.

As a little super, extra bonus of awesomeness, everyone who attends will get a Grandmama sticker, created by Nalee Thao for The Charlotte Podcast. And, that makes us think … we need to turnback the clock and share the story behind the sticker.

To get geeked up for Friday, enjoy our “WindBack Wednesday” pick, originally posted in the biscuit on March 28.

She bounded onto the Charlotte scene in all her 90s splendor — a blur of horn-rimmed glasses and gray — and slammed dunked our hearts. Her name was Grandmama. The Queen City adorned her. 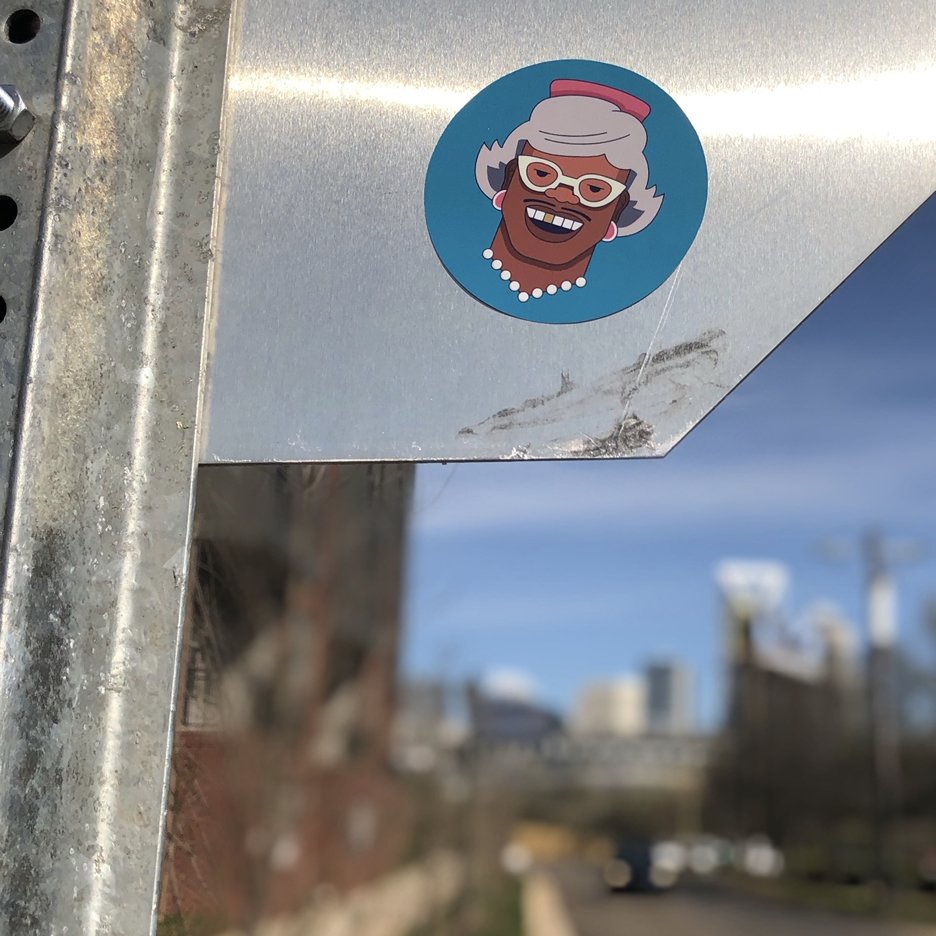 Luckily, thanks to the long memory and chutzpah of The Charlotte Podcast, the graphic prowess of Nalee Thao and a $250 HUG (Helpful Unfettered Gift) Micro-Grant, Grandmama lives again. This time, she aims to stick around.

“I would say 80% of the time we have to explain who Grandmama is to people,” added The Charlotte Podcast. “To us, that’s a sign that Charlotte needs a sticker campaign to educate the masses about Grandmama.”

In 1991, the Charlotte Hornets drafted power forward Larry Johnson as the number one pick in the NBA draft. He was intended to usher in a golden age for the Hornets. The city was smitten.

Not long after, Converse unveiled a campaign with Johnson (AKA “LJ”) playing his own grandmother as part of a campaign to sell shoes. She was a mad dribbling, high flying sensation in the Queen City. It was not to last.

Johnson was joined the next year by Hornets draft pick Alonzo Mourning. The two, with Muggsy Bogues and company, were to lead the Hornets to glory. (Before Charlotte murals were even a thing … Bogues, Mourning and Johnson had one on Tryon Street Uptown.)

It didn’t work out that way. Johnson and Mourning were not a mix. By 1995, Mourning was headed to the Heat. A year later, Johnson was on his way to the New York Knicks. Grandmama was retired. But, she wasn’t forgotten.

And now … a sticker

“The icon of Grandmama is something that people of a certain age remember fondly, and those too young to remember always seem to enjoy learning the backstory,” says The Charlotte Podcast. “Now is the time because

Grandmama has been overlooked. Grandmama’s legacy is confined to a few hardcore fans of 1.0.”

With plenty of turnover in the Charlotte population since the mid-90s, it’s easy to understand why Grandmama, has been a faint, ghostly memory for years. That’s something The Charlotte Podcast aims to fix. HUG Grant in hand, The Charlotte Podcast reached out to local artist Nalee Thao to design a sticker to bring the “Grand Damme of Hornets History” back.

“When they approached me about creating the Grandmama stickers, I immediately said yes while old 90s Converse commercials flooded my head,” says Thao. “I want people to feel that excitement that the Hornets bring to Charlotte when they see these stickers around town.”

“I want them to remember how they felt watching LJ play alongside Muggsy Bogues and Alonzo Mourning,” she adds. “I want them to feel a little giddy inside when they stare at Grandmama’s gold tooth. I want them to know and remember that Charlotte is creative.”

The Grandmama stickers are printed and available for free. You’ll see them around the city, but if you’re interested in scoring one for yourself, we suggest reaching out to The Charlotte Podcast on Instagram.

Take a gander at the grandeur of one of Grandmama’s many commercials.

And, to illustrate the rocky relationship between Johnson and Mourning that persisted long after they departed the Hornets, here’s a confrontation between the two in 1998. We like to think of it as the “Slap Fight Heard ‘Round the World.”