MyLoan Dinh never stops. In the fourth quarter of 2019, she was a resident at McColl Center for Art + Innovation. In January, she unveiled a new mural,  “Collective History.” at Knight Theater in conjunction with Tim Robbins’ production of The New Colossus. And, now, she’s the co-artistic director (with her husband, Till Schmidt Rimpler) of HEAVEN, an inter-disciplinary performance at Booth Playhouse, running Feb. 27-March 1. (See below.) Who knows what she’ll do next week?

Normally, we ask those we’re interviewing to give us a few facts about themselves. And, from there, we write more about them. This time, we loved MyLoan’s words so much, we’re running them just as she sent them.  Here’s how she described herself:

married 25 years to an equally crazy creative human – Till Schmidt-Rimpler: Choreographer and Artistic Director of Moving Poets (he is German)

a compulsive side – which explains why a lot of my artwork is made with thousands of tiny eggshells on boxing gloves.

Amazing! After that, we almost felt bad asking MyLoan 5 ridiculous questions, but … we did it anyway.

1) You live in one of the coolest houses in Charlotte. If you and Till HAD to move, BUT you could pick any non-residential building in Charlotte in which to live, where would it be?

I told Till if we HAD to move again, it would be feet first for me.

But hypothetically, it would be a solar-powered wooden houseboat (NOT a yacht – more like a jacked-up version of Noah’s Ark) on Lake Wylie with a smaller annex houseboat for my studio – connected by a drawbridge or a slide. I would have to add a big front porch.

Super G-Mart, cause we love international food. I would put a private loft above aisles 7, 8 & 9, build a second floor for a black box theatre and artists studios and put a large terrace, garden and solar panels on the roof. Too weird?

(I was gonna say Eastland Mall, but you know. Although, it would be great to build something like that in the parking lot.)

2) What was the third thing you said to Tim Robbins after meeting him?

“Tim, what part of Charlotte have you seen on your time off? Have you been to the East Side?”

3) Ummmm … what happens to people who use the trash cans under your tear off calendars at the McColl Center? (Asking for a friend.)

Ahh. “The Made in America” installation – those daily tear-off sheets (with children and targets printed on them) are prompts for people to exercise their right in a free democracy. They are made to be mailed to gov. officials to express why we want gun reform (instructions are on the back of the sheets).

4) When you travel, what’s the most common question people ask you about the Queen City?

5) We have a million dollars and you have 50 words to pitch us on a new art installation or performance … GO! (P.S. We have the $1 million in Monopoly money.)

Be Moved by Moving Poets’ HEAVEN 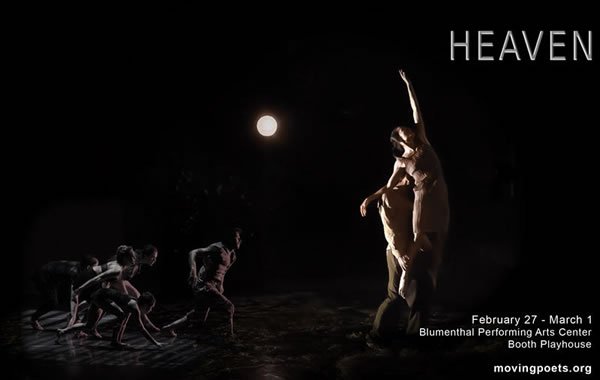 Told through contemporary dance, theater, music, film, video-mapping and visual arts, the story travels through realities and dreams of Maria-Helena, a detained immigrant child. Separated from her parents and maneuvering an upside-down heaven in her holding cage, she learns that to be released she must find a “lamp beside the golden door.”  The audience will be part of the performance and may influence events in HEAVEN.

The production is inspired by the poem FALLEN MOON FALLEN STARS by North Carolina’s award-winning poet Chuck Sullivan and the work of artists from Charlotte and beyond.

Read more about this production.