In late January, writer Jonathan McFadden toured the Levine Museum of the New South’s exhibit, “Brooklyn: Once A City Within A City,” with author and historian, Tom Hanchett. Here are his thoughts about the experience.

Do yourself a favor, and spend an afternoon talking with Tom Hanchett about “farsighted” men and their knack for taking land.

If you don’t know him, Tom is Charlotte’s foremost historian. And ever since he moved to this city in 1981, he’s studied one of its most shameful stories from our unsavory past: Brooklyn Village. 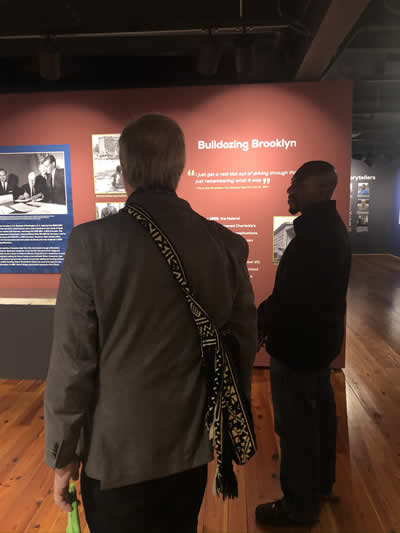 Tom Hanchett and Jonathan McFadden visit the Brooklyn Exhibit at the Levine Museum of the New South.

Together, Tom and I toured “Brooklyn: Once A City Within A City,” a new exhibit at the Levine Museum of the New South telling the stirring and sad story of Charlotte’s most prominent African-American neighborhood.

Brooklyn Village, home to black-owned businesses, churches, community centers and the like, was leveled during the federal government’s urban renewal campaign of the 1960s. Over time, Brooklyn, in Charlotte’s Second Ward, became the city’s sterile government district in Uptown.

In 10 years, it’ll be Brooklyn Village again. This time, however, it’ll be the site of a 17-acre mixed-use development with apartments, offices, hotels and retail — a far cry from the flourishing black neighborhood that housed the iconic Savoy Theatre and the Brevard Street Library, North Carolina’s first black library.

The moment Tom and I walked into the Brooklyn exhibit, a quote on the wall hit us with stark realism. It comes from a 1912 editorial published in The Charlotte Observer that reads, in part: “The Second Ward is already populated by [African] Americans, many owning comfortable homes, but farsighted men believe that eventually this section, because of its proximity to the center of the city, must sooner or later be utilized by the white population.”

So are the newer, upscale homes in Cherry, another historically black neighborhood near Uptown that’s been transformed by “farsighted” men. Let’s not forget Biddleville, Grier Heights and Optimist Park — all historic black communities, all close to Uptown, all on the cusp of “farsighted” change.

I asked for Tom’s thoughts on how development in Charlotte today seems to follow the blueprint of development in the Charlotte of yesteryear — i.e., altering black neighborhoods into whiter ones and pricing people out of their homes.

“There’s a doctrine in real estate called highest and best use…it’s about power and who has the economic power to shape real estate,” he said. “The people who push against the envelope of what’s possible are the people with the capital to do it and they are rewarded when they sell stuff. It seems like a beautiful, natural process…but highest and best use is dictated by the imagination of those who are playing the game.” 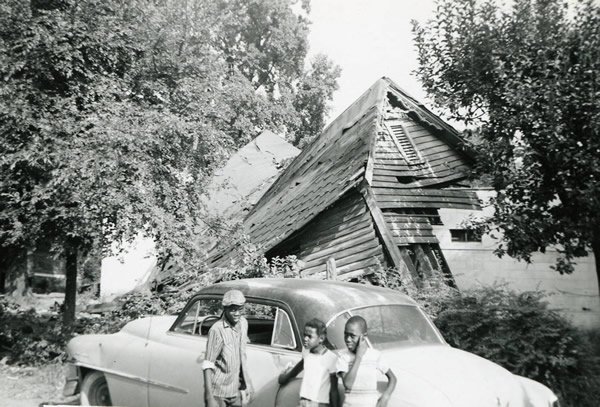 In theory, development and neighborhood uplift aren’t bad things. But they’re market-driven, not people-driven. And a market-driven approach rarely defers to or partners with people already living in gentrifying communities.

Tom hopes Charlotte’s “farsighted” developers take cues from the past and build in a way that doesn’t continue razing black history and displacing entire families. I share some of that optimism.

Don Peebles, Brooklyn’s new developer, is black. He has said he wants to honor Brooklyn’s history while shaping the future, and that the project will benefit black businesses.

“Farsighted” men promised to rebuild before destroying Brooklyn’s 1,480 homes, 216 businesses and two schools across 238 acres. It never happened – probably because being “farsighted” has more to do with dollars than humans and our collective memory is short.

That’s why on my next trip to the exhibit, I want a developer to tag along.

Experience the Exhibit Yourself

Brooklyn: Once a City Within a City, is currently on display at the Levine Museum of the New South in uptown Charlotte.

Part of the #HomeCLT series, chronicling the stories of neighborhoods across Charlotte, the Brooklyn exhibition explores the “rise and demise of Charlotte’s Brooklyn neighborhood, once the most thriving and vibrant black community in the Carolinas.” Click here for more information.